From Wicked Ride to Bounce: how this bike rental startup is on the road to changing the way urban India commutes 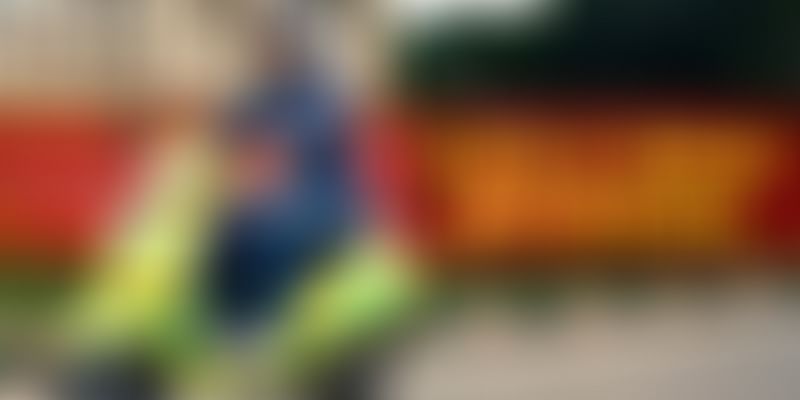 Bike rental startup Bounce is on the road to making the daily commute stress-free, reliable, and time-saving for urban India through its shared mobility solutions. Bounce Co-founder Vivekananda HR talks to YourStory's Shradha Sharma on the startup's plans to change the way Indians commute.

At first glance, Vivekananda HR, Co-founder of bike rental platform Bounce, seems like any other guy. Dressed in a casual T-shirt and jeans, Vivekananda has an unassuming air about him. But talk to him and what’s distinctly apparent is the clarity of his vision for Bounce — to make daily commute stress-free, reliable, and time-saving for urban India through its shared mobility solutions.

That, and the ease with which he rattled off a slew of data points related to Bounce’s success in providing an alternate mode of transportation for daily as well as first-and last-mile commute were all proof of the rigorous planning and hard work that has gone into the making of Bounce.

Now, if you have ever commuted in Bengaluru, you may have noticed the bright yellow and red Bounce scooters parked outside Metro stations. For commuters in Bengaluru, as with those in the 11 other cities that Bounce operates in, these daily commute bikes are an answer to their last-mile woes.

Bounce’s keyless scooters allow users the convenience of picking up a bike from anywhere through its app and dropping it at any location once they reach their destination.

Today, the company’s fleet of docked and dockless scooters consists of more than 8,000 scooters, of which over half are dockless bikes. It has clocked over 1.3 million rides in three months, an impressive feat for a company that formally began daily commute services last year.

Also read: After US and China, will India be the next bike-sharing hub of 2018?

From Wicked Ride to Bounce: the journey

And yet, for Founders Vivekananda, Varun Agni, and Anil G, their journey into the mobility space did not begin with Bounce, or Metro Bikes as it was earlier called  In fact, in 2014, the trio first founded Wicked Ride, a premium bike rental platform. The idea to start Wicked Ride came to them when Anil had to wait 12 months for a Royal Enfield after placing his order for one.

“We found it ridiculous that someone had to wait for so long for one bike. Then we realised that it would be a problem for any high-end bike: Harley Davidson, Hayabusa, or any other luxury bike. And instead of spending several lakhs it is better to rent it,” says Vivekananda (aka Vivek).

The team later began offering daily commute bikes under the Metro Bikes label, rightfully named after the source of their idea to start what would later be called Bounce.

“The idea of Bounce came when the first part of the metro line opened in Bengaluru in 2016. We wondered if it would transform commuting in the city. We realised that if we wanted to address mobility at large, we needed to look at the Point A-to-B commute,” says Vivek.

Currently, the reason last- and first-mile commute is a challenge in India is because infrastructure development in the country is not moving at the same pace as urbanisation, especially in the top five metros, says Vivek.

Also read: Micro-mobility: the next wave of urban transportation in India

Scooters as the natural choice

To address this challenge, the team looked at different modes of transport - cars, two-wheelers, and cycles. They chose two-wheelers, as it seemed like the natural choice.

“We realised bikes would have the easiest transition, considering India has the highest two-wheeler owning population,” says Vivek.

Still, at the time, there were hardly any players in the space. “There was Ofo and Mobike in China, but we knew that in India cycles would be tough; most of us are lazy!” says Vivek with his usual candid demeanor.

The team started by using revenues generated from Wicked Ride to assemble a fleet of 20 scooters. They also raised a grant of Rs 12 lakh from the Toyota Mobility Foundation, which helped them create a simulation experiment at the Byapannahalli Metro station in eastern Bengaluru.

Vivek says the team then began with working with people on the ground to offer this service: one person would hand over the bike keys, get the user to sign paper documentation, and then hand over the bikes. They also worked with people in the near-adjacent suburb of Whitefield to collect the keys and bikes.

“Even with that level of friction, there was evidence that people needed the service. It takes close to two hours to reach Whitelfield from Byapannahalli station (by car, during peak hours). The bikes helped reduce the commute time,” says Vivek.

To make that ride better, Bounce began working on the hardware and technology to build the dockless scooter-sharing model. Vivek explains that the simulation study helped them realise the demand in the sector.

“It was then that Varun began designing the technology and the hardware behind built an IoT-enabled vehicle,” points out Vivek. This would help users unlock the vehicles without a key, drive it to where they wanted in the city, and drop it off at their destination, wherever that may be.

When the going gets tough

The ride, however, had its fair share of challenges.

“The first few months we were running on the fumes of what we had made from Wicked Rides. Till we got our VC backing it was a stressful period every day. I am grateful and thankful to my team, which stuck around,” says Vivek.

In August 2018, the team raised equity funding from Sequoia Capital and Accel Partners. “What was a proud moment for us was that both the investors had invested in India and us before their US counterparts invested in the scooter sharing company, Bird,” says Vivek.

For now, Bounce says it has enough cash to keep it going. Along with the equity infusion, Bounce has also raised debt capital for asset acquisition from Flipkart Co-founder Sachin Bansal.

According to its RoC filings, Bounce revenues grew to Rs 5.4 crore in FY 2017-18 from Rs 4.3 crore in the previous fiscal. For the same period, losses widened from Rs 3.2 crore to Rs 7 crore.

The model and future

Bounce's current bike-rental pricing -- Rs 5 per kilometre and Rs 0.5 per minute -- makes it one of the most cost-effective commute options for users. It's even cheaper than travelling in an autorickshaw.

The company's pricing model works like this: the cost of petrol works out to Rs 1.75 to Rs 2 per km and maintenance to Rs 1.5 per km. This works out to over Rs 4 per km. If you charge anything above that you start making Re 1 for every kilometre.

However, the team can further reduce this cost, and that is where electric vehicles (EVs) come into the picture. The cost of electricity significantly pulls down the overall price to Rs 0.5 per km, which means the consumer can be charged Rs 3 per kilometre and still allow Bounce to make money.

“Today, true fundamental mobility is only accessible to a privileged few and Bounce is trying to change that in a significant way. I believe Bounce is the perfect place to make radical changes to mobility and transform the way India commutes.”

The team is currently looking to add more electric vehicles and is working with different vendors and partners for the same.

“If I was to talk about a vision, I believe we can do over one million rides in a day. If there is any category in mobility that can achieve that kind of scale in India, it is scooters,” says Vivek.