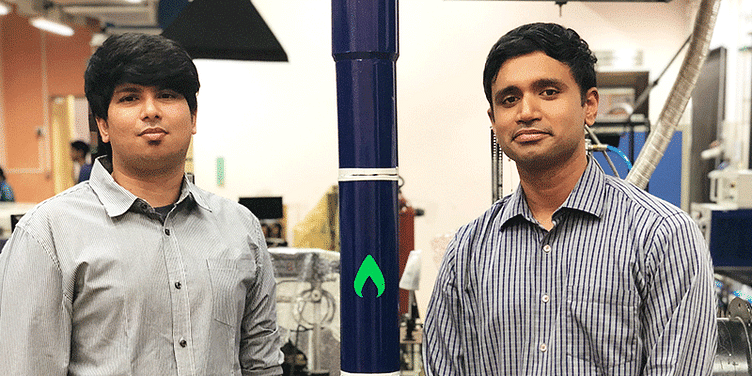 Started in 2017, Chennai-based startup Agnikul Cosmos provides a dedicated launch vehicle for smaller satellites at a lower cost. In this video interview with YourStory, the founders tell us more.

Even with all the advancements in space technology, launching a satellite is no joke. It takes at least 24 months for a small satellite, weighing less than 500 kg, to enter the earth’s orbit. And the reason for the delay is because there aren’t any dedicated launch vehicles built for such small satellites.

Today, government agencies like the National Aeronautics and Space Administration (NASA) and the Indian Space Research Organisation (ISRO), and private firms like Space X are launching various satellites for certain application in the space. But the catch is their launch vehicles aren’t really designed for smaller satellites. They are meant to launch larger satellites, weighing more than 1,000 kg, into space.

Bringing a solution to this problem is Agnikul Cosmos, which is currently incubated at IIT Madras. Started by Srinath Ravichandran and Moin SPM in 2017, the startup provides a dedicated launch vehicle for smaller satellites at a lower cost.

Apart from this, what makes Agnikul stand apart from its competitors is its launch time period. According to the founders, the startup promises to put small satellites (below 500 kg) into low-Earth orbit in just two weeks.

And making this possible is its team of engineers. Unlike Elon Musk’s Space X, which has nearly 50 PhD holders to build its rocket, Agnikul, on the other hand, has a small yet efficient team. The team builds the entire rocket and carries out its testing at the National Centre for Combustion Research and Development (NCCRD), at IIT Madras.

Demystifying rocket science (as much as it can possibly be demystified, at least), Srinath says,

“You respect it, but you don’t worship it. Rocket science is hard, but it is still achievable by people. For instance, the average age of people who built the vehicle for the Apollo Mission in 1969 was 26, and this is what we tell our team regularly, that nothing is impossible.”

Interestingly, most part of the rocket built by Agnikul is 3D printed. It’s a boon, as the founders explain, because 3D printing the rocket deducts the overall manufacturing cost with pinpoint accuracy in terms of the overall design. At present, the team is working on the research and testing part of its launch vehicle at NCCRD lab.

Over the years, the Indian aerospace industry has achieved major breakthroughs. But Agnikul promises to be the first Indian startup to put small satellites into space. As Moin says, if the money flows in, by 2021 they will become India’s first startup to launch a vehicle in space.

The startup had previously raised Rs 3 crore in seed funding from Vishesh Rajaram and Arjun Rao from Speciale Invest.

WATCH: How IIT Madras-incubated GUVI is bridging the language divide and making life easy for r...