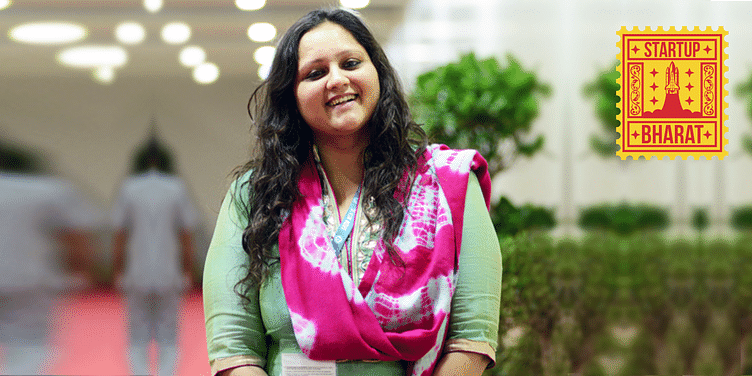 Once ‘Officer on Special Duty’ to former Rajasthan Chief Minister Vasundhara Raje, Aanchal Gupta now wants every business to have access to the right digital marketing and branding options.

Like so many other teenagers in India, Aanchal Gupta enrolled for an engineering degree because her parents wanted her to. Then came a double blow – just as the course began, her father passed away. Within a year, she also lost her mother. For the next five years, Aanchal not only looked after her younger brother, but also began working part-time to make ends meet.

Today, the 29-year-old is the Founder and CEO of Brand Balance, a branding think-tank based out of Jaipur, which turned one earlier this week. Having clocked an annual revenue of over Rs 40 lakh with a team of only a dozen people, Aanchal says she’s just getting started.

Before starting up on her own, Aanchal served as Officer on Special Duty (OSD) Communication to former Rajasthan Chief Minister Vasundhara Raje for almost six years. Having always been good at writing, she started as a freelancer in college and began picking up skills like audio and video editing. She also volunteered to conduct events for organisations like FICCI and CII. But what really caught her attention was social media - a new phenomenon back then.

“By the time I finished college, I had three years of experience,” she laughs. A short stint at an American ecommerce company saw her improve their returns on social media, email, and affiliate marketing by 250 percent.

From college to the CM’s office

One day in early 2013, Aanchal received a call from the office of Vasundhara Raje, who was looking to return as the Rajasthan CM later that year.

“Until then, I had no knowledge of, or exposure to politics. So, I was sceptical. But once I met her, I was impressed and excited by her creativity. I saw a lot of potential in these ideas,” she recalls. After a quick test project, she decided to join.

While relatives discouraged Aanchal from working for a politician, her brother told her to follow her instincts. So that’s what she did. What followed was 11 months of setting up a social media and communications team from scratch, managing media agencies, overseeing creative agencies, and increasing the politician’s following on social media.

“When I joined, she had 60,000 followers. The day she took oath as Chief Minister, it was 10 lakh. When I left four years later, she had 90 lakh followers. Vasundhara ma’am is still the most followed female politician in India, and among the top 15 globally,” Aanchal says with pride.

Soon after, she was appointed OSD Communications and worked on some creative campaigns that were also translated into offline projects, including the investment promotion programme Resurgent Rajasthan, the Global Rajasthan Agritech meet, the Bhamashah Swasthya Bima Yojana, and her most passionate project to date: Rajasthan Tourism's ‘Jaane Kya Dikh Jaye’ campaign.

Aanchal says, “It was important to think from the point of view of the tourist. Convincing stakeholders in the government took a lot of hard work. But it paid off.”

No agency? No problem!

However, every time they had to launch a creative campaign, they would have to reach out to an agency in Delhi, Mumbai or Bengaluru. It was frustrating. And, having spent four years in one role, Aanchal was also beginning to feel that she needed new avenues to express her creativity. Seeing a lack of creative communications in Jaipur, she decided to do something about it.

“My mother always said that if you were going to do something, you had to give it your 100 percent,” says Aanchal. “I had an offer from Facebook, but I knew it was time to strike out on my own.”

And that was how Brand Balance came into being. Says Aanchal,

“The idea was simple: Since there was more information in communication rather than storytelling, we would translate every piece of data/information into a potential story, creatively supported with analytics. Brand Balance’s inclusion in the Rajasthan Government’s iStart programme gave us the headstart and the right ecosystem to grow.”

The founder decided to create an autonomous team with web and app development, digital marketing and management, brand management, design, and content management - all under one roof. Success followed and her first breakthrough came through the #KikiKills campaign for Jaipur Police in response to the viral #KikiChallenge.

Today, Brand Balance works with several government departments, as well as private players. They have worked with the Rajasthan Education Department on a crowdfunding platform Gyan Sankalp Portal; the Mukhyamantri Jal Swavlamban Abhiyan, which focuses on recharging ground water; and the Khadi and Village Industries Board, among others.

In fact, the Rajasthan Election Commission hired the company for the state’s 2018 Assembly Elections and the 2019 General Elections. As part of the ‘Let’s Vote Jaipur’ campaign, the team was thrilled to see 280 hoardings across the city carrying their designs.

“We are also working with quite a few local businesses and crowdfunding campaigns,” says Aanchal, “I have not yet gone out and done any formal business development yet. Once people knew I started up on my own, they called me up and business has been steadily pouring in.”

Finding business hasn’t been the challenge. But, “finding the right talent is the bigger challenge,” explains Aanchal.

She adds, “I’m looking for fresh blood – people with ideas, people who have worked at startups and know what it’s like to hustle.”

The founder is looking to expand all over Rajasthan through their BB Extend programme and change the perception that businesses and audiences in smaller cities don’t care about creativity.

“There is a huge market in Tier II, III and, IV cities for branding and digital communication and marketing – every business needs it. I want to work as a parent agency and set up smaller ones jointly with equally creative entrepreneurs in smaller cities,” explains the entrepreneur, adding,

“In cities like mine, girls still don’t get platforms to discover themselves because they are expected to get married in their early twenties and stop working. I want them to understand that if there is a creative angle to you, this is a profession you can take up.”

Startups are also a big part of Brand Balance’s strategy. In her stint with the government, Aanchal realised how new startups struggle with the idea of visibility and marketing strategies that required low investments. So, she created a BB Headstart package for startups at the most basic price range. It is also working on creating a women-entrepreneur centric package.

“I could see that they need help with visibility, getting their image right, and understanding it’s important to invest in branding at an affordable price,” she says. Ask her why and Aanchal promptly responds,

“Not all startups need funding, but all of them need visibility.”

Check out other stories of innovation from the heart of India, only on Startup Bharat