In a tete-a-tete with YourStory, Rohit Kapoor, CEO of OYO’s New Real Estate Business, reveals why OYO is transforming from hospitality to co-living, how he’s focusing on finding the right talent, and what he likes doing when he’s not working.

There has been plenty written about hospitality juggernaut OYO Hotels and Homes entering new markets and sub-segments, and how that impacts existing players. In the past year or so, it has begun slowly transforming from a hospitality company into a real estate company with serious designs on the business of living.

OYO LIFE was launched in India in October 2018 and then in Japan (as part of a joint venture with Yahoo! Japan) with much fanfare in March this year. In India, OYO may not have had the first-mover advantage, but says its co-living vertical is one of the biggest in the country – and growing rapidly.

Targeted at millennials and young professionals in search of fully managed homes on long-term rentals at affordable prices, OYO Life is what the six-year-old unicorn is focusing on in India this year. While OYO LIFE doesn’t (yet) have a sub-category focusing on students, a notable chunk of its residents are students, which puts it in direct competition with specialist players in the student co-living space. There has also been talk of OYO stepping into the co-working space, but - not surprisingly - the company doesn’t yet want to talk about it.

YourStory caught up with the man behind this rapid growth – Rohit Kapoor, CEO of OYO’s New Real Estate Business – to discover what else is in the works and what brings him back to work every day.

Rohit joined OYO in December 2018 after spending a decade a consulting firm McKinsey and eight years at Max Healthcare where his last position was Executive Director. A keen long-distance cyclist, an avid traveler, and photography enthusiast, he hasn’t had much time to pursue these hobbies in the recent past. And no, it’s not because of work.

YourStory: From hospitality to co-living – what’s attractive about this space?

Rohit Kapoor: Today’s youth expects more than just the four walls of a room. People desire a higher quality of hospitality with amenities and comforts that let them get more out of life, to do what they are passionate about without having to stress over everyday home maintenance issues.

They want a hassle-free experience, where nobody is asking them questions about gender, age, caste, marital status, and whatnot.

So, co-living works very well for a young workforce and students. It gives them the freedom and space they need and also eliminates the hassles of dealing with brokers, brokerage, lock-in periods, houses with little or no amenities, maintenance charges, housekeeping services, and security deposits, which can be a costly affair.

And there’s no lock-in period. So you don’t have to worry if you get transferred to a different city in three months or if you change jobs and need to move to another locality.

Let me share some interesting use cases. We think of NCR as one city, whereas the population is like that of a small country. We are starting to see people who have a house in Noida but rent an OYO LIFE room in Gurugram and go back home only on the weekends to avoid a four-five-hour daily commute.

Next, people are increasingly living light – I was just speaking to someone we were trying to recruit from another city, and he told me he lived with three bags that contained his books and clothes, and a rented bean bag.

People are thinking far more about experiencing life than just about owning things.

At the same time, people who have moved away from home into big cities do feel a sense of loneliness. They’re looking for a sense of community and belonging. And a setup like OYO LIFE gives you that – the company of like-minded individuals in a comfortable setting.

Then there’s the affordability. People really want certain things – convenience, a community – for which they are willing to forego certain other things like a private dining area, a terrace, or a balcony. This allows affordability to kick in. So, though we are targeted at young professionals, we have students and even married couples opting for these facilities.

It’s one of the reasons we are seeing very strong demand. More than 100 of our buildings run at 95 percent occupancy. Another 30 run at 100 percent occupancy. Between February and May this year, we have seen a 3x jump in the number of beds booked each month.

In India, OYO LIFE is currently present in four cities - Bengaluru, Noida, Gurugram, and Pune. Seven months after it was launched, it has over 350 buildings, 17,000+ live beds, and is adding 3,000 new beds each month. This makes us one of the largest businesses for branded fully managed housing for millennials globally.

YS: What attracted you to OYO in the first place?

RK: I spent a decade with McKinsey, and then eight years at Max Healthcare. So, I was looking at companies which were going to become truly global corporations in the not-so-distant future. My shortlist did include OYO because of the way it was building up with a clear focus on global growth.

If I had to mention just one thing, I would say the people I met during the hiring process. Just the quality of talent that OYO has been able to put together in a short span of time. There was such consistency in the language and alignment with the vision and mission. The conversations with [Founder and Group CEO] Ritesh [Agarwal] were very inspiring.

Also, I personally love design, and this is a company that creates beautiful living spaces, so that was a bonus.

There is so much space for everyone to perform and chase big, bold targets. Not a single day goes by when I don’t go home knowing that we have done something new and innovative. It’s fascinating.

YS: What has been your priority these past five months?

RK: To get 50 good people on board. We have rapidly recruited some great talent at every level. I started with one person in December. Today, we have 500 people. It was important to ensure that there was enough bandwidth at every level and strong communication to our incoming team members about what we stand for, and what we want to achieve.

I’m truly privileged to be leading an exceptional company. And it is unlike any place I’ve worked at before … the talent we have and how much that talent is willing to work hard. So all I can say is keep watching us.

YS: What do you do when you’re not at work or thinking about work?

RK: I’ll tell you what I like doing and what I actually end up doing. I love long-distance cycling. Last year, I cycled from Manali to Leh – it’s one of the toughest cycling tracks in the world and took nine days. I love traveling and photography. I can write a decent article once in a while.

But what keeps me occupied these days outside of work is playing caddie to my kids on the golf course. My daughter is seven and my son is 16. They’ve started playing in international tournaments. My daughter has qualified for the Junior World Championships. So all my free time is spent ensuring they get to play as much as they want to.

Here’s how Bigbasket raised $150M to turn a unicorn, and this is what the grocery startup plans... 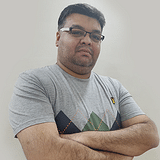