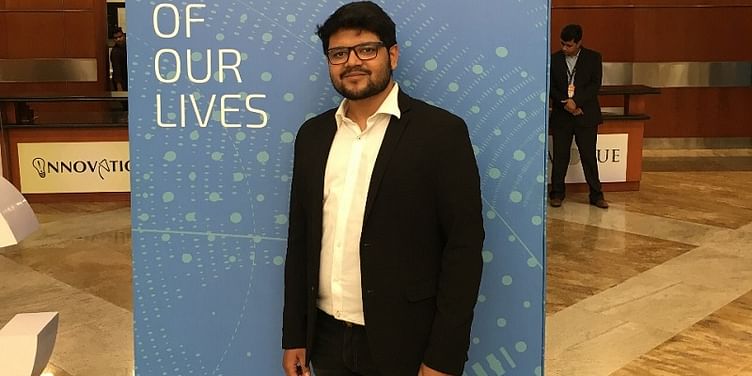 Bengaluru-based blockchain startup’s product Sentinel offers token-less, powerful and easy-to-use smart contract solutions to enterprises. In a video interview with YourStory, the founders reveal why they decided to bet big on Blockchain.

Founded in early 2018 by Kumar Anirudh and Nilesh Trivedi, the startup aims to solve the issue of mistrust between parties and business partners by enhancing transparency while reducing costs and time expenditure.

In a chat with YourStory, Co-founder Kumar Anirudh talks about the startup’s beginning, how their product helps enterprises work with smart contracts, and the way ahead.

It was late 2017 when Kumar met Nilesh at an Indium Network meetup. Both were core contributors to the various Blockchain apps and libraries.

“We discussed a lot of ideas and soon realised the need for a system that allowed the easy configuration of smart contracts usage with UPI to provide a conditional payments layer,” says Kumar.

Acyclic Labs was set up with an investment of about Rs 50 lakh from the co-founders. It was also a part of Cisco LaunchPad this year. The duo began work at a time when cryptocurrencies were not banned by RBI and were under heavy circulation.

“We just didn’t see cryptocurrencies at the same level as others. We realised the need of a regulated system and developed Sentinel,” Kumar says.

WATCH: Blockchain is about bringing power back to the people, says founding member of Blockchai...

Sentinel is a Blockchain-powered platform that enables a “connected and inclusive world by building powerful, compliant and easy-to-use smart contract solutions”.The token-less solution is not linked to crypto; it lets companies focus on their business use-case and takes care of the underlying smart contracts. It also allows developers to build applications on top of Sentinel.

The platform lets users can write their conditions; these are translated into a smart contract and deployed on a Blockchain. The payment is triggered on UPI directly to the UPI VPA provided in the platform when the smart contract conditions are met.

Every transaction is recorded on the Blockchain, and the entire report is available at the click of a button. Any developer can integrate with the platform using traditional REST APIs, which take care of the smart contract functionality.

The company has built its tech on micro-services architecture, components of which are written in Python, NodeJs, Golang, VueJS, and ReactJS, using Solidity for smart contracts and Indium Network for Blockchain. The platform is currently deployed on multiple server instances across AWS and Google Cloud.

WATCH: Why Japanese company Emurgo is setting up a Blockchain academy in India

Today, most payments are made offline (paper contracts) or on a centralised system that governs payment rules. This central system, think banks, stores necessary documents to ensure that rules are followed.

"We are bridging the gap between payment transactions and business rules, and the utter dependence of a third-party resource to govern over rules. Using our platform, users will be able to encode payments with their own rules and process them accordingly,” Kumar says.

Acyclic Labs uses UPI because of its wide-scale adoption and the desire for businesses to use it. Its smart contracts encode these conditions so they can run on a decentralised network, and transaction records can be easily audited and reconciled.

The startup services the B2B sector, which is hugely dependent on mobile – and timely – payments. A Flipkart analogy can help make things clear.

Flipkart opened the doors to cash on delivery because it understood the ultimate desire of the customers and knew they would be willing to pay when the goods were in their hands.

“We are simply replacing the arbiter in the escrow with a smart contract,” Kumar says.

There is a big market out there. As of February 2019, 139 banks are live on UPI and 800+ million transactions have been made, which is more than international payment channels like VISA and AMEX.

India has the most advanced industry ecosystem in mobile payments in the world and it’s still growing. Conditional payments are the obvious evolution.

Acyclic Labs’ platform works on a subscription-based pricing model for businesses. The fair price chart is based on the number of transactions and smart contracts deployed. The startup also offers a licensing model for self-hosted solutions, which is often preferred by enterprises with their own data centres.

The founders have five signed POCs signed as of now, and are waiting for the projects to get to the earning money.

“Building a bootstrapped company is difficult, but it is more difficult for a new startup to work with banks, especially in the blockchain space. We had to convince them that we were working on blockchain and not cryptocurrency. It was difficult, but we overcame [the challenge],” Kumar says.

Over the next 18 months, the company, which is yet to raise money, is keen to sign up customers. The co-founders plan on staying in the B2B space “for the next 24 months at least” and focus on “how customer adoption will take place and how the product will evolve”.

In the next two years, Acyclic Labs will support various payment channels, dot networks, smart contract languages, and other domains, including supply and retail chain, education, healthcare, and so on. The startup is currently inviting educational institutions and edtech startups to try them out.

Their differentiator, they claim, is that they have developed a way to interact with a public blockchain network without having to use cryptocurrency. This, along with the plug-and-play platform that allows easy integration, makes the blockchain startup a solid bet.

Smart contracts are the rage these days, and India is just waking up to their benefits. Will Acyclic Labs be able to tap into rising demand?