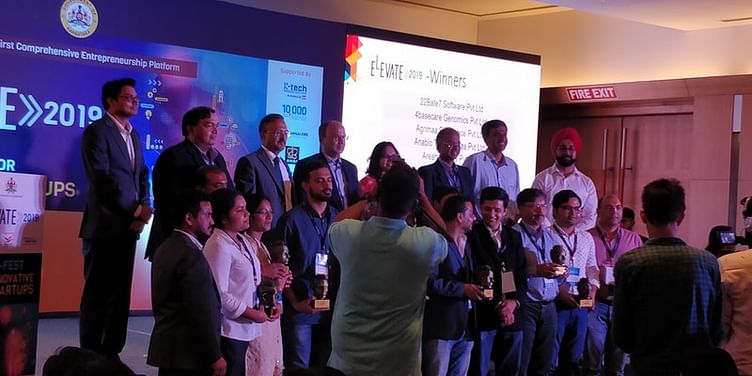 After two days of pitching sessions by startup founders at Elevate 2019, the grand jury finalised 100 startups to be provided grants.

Elevate 2019, the brainchild of the startup cell of the IT & BT Department, Government of Karnataka, held at Hotel Lalit Ashok, Bengaluru, concluded on Tuesday, by declaring 100 startups as winners eligible for grants up to Rs 50 lakh.

Gaurav Gupta, Principal Secretary, Dept of IT, BT, S&T, and Department of Commerce & Industry, Government of Karnataka, said, “270 startups pitched in person before a grand jury on Monday. Of them, 60 startups were from Tier II cities, and 210 were from Bengaluru”.

On Tuesday, the final 100 startups were declared eligible for grants. “Of them, 23 are from Tier II and III cities, and includes those from Chamarajnagar and Bijapur. Twenty-nine startups have women as co-founders.”

Elevate 2019: Ex-entrepreneurs are changing the perspective of the investment community

He also spoke about how the startup ecosystem in the state is improving, and how Bengaluru rose to the 18th rank among the top startups in the world, and also boasts of several corporate incubators like Microsoft and NetApp.

The Elevate Programme was launched in August 2017. As part of the programme, the Karnataka government provides a comprehensive entrepreneurship platform that includes idea validation, funding, and space, among others. It also gives grants of up to Rs 50 lakh in tranches. The programme sees participation from the industry, the Deshpande Foundation, TiE, Centres of excellence, NASSCOM, and various industry associations.

Gupta also spoke of how the past winners of Elevate Karnataka have made great inroads in their fields. He pointed out examples like the Elevate 2018 winner - AI-based healthtech startup Niramai Health Analytix that raised $6 million in Series A funding led by Japanese VC firm Dream Incubator, Beenext and other investors; and Elevate 2017 winner Bellatrix Aerospace, that secured funding from Survam Partners of the Suman Kant Munjal family and Deepika Padukone.

“The outcome of success is not in the hands of the entrepreneur alone. The people inside the company, the external environment, regulations, etc, all determine success. Remember this algorithm – 99 percent of startups will fail. But 100 percent of entrepreneurs will succeed.”

On Tuesday, there were talks by industry experts and panel discussions relevant to startups were held. Important among them were panels on the investment landscape and empowering startups for growth and impact. Talks on Design and IP laws also attracted huge crowds.

As part of the event, Prabuddha Vyas, Managing Director, UniKwan, spoke about the history of design. He spoke on how an institute called Bauhaus was started in Germany, which has had a profound and seminal influence upon subsequent developments in art, architecture, and design. Even Apple was influenced by Bauhaus indirectly, he said.

Suchitra Eashwar, Founder and CEO, CWE, speaking about the state of affairs of women entrepreneurs, said, “Only 14 percent of all enterprises are owned or led by women. A lot of them are in the micro sector. But women-led startups are also the fastest growing sector.” She touched upon data from the recent YourStory Funding Report and pointed out that women received only 10 percent of the overall funding in H1, 2019.

Speaking on Intellectual Property Rights, Brinda Varma, Founding Partners, Aekam Legal Abode, said that infringement under trademark laws has been very common. She suggested that startups should start using “TM” symbol once they start their business.

He gave a short but exciting preview of the event – from the night drone extravaganza and Robocomp (robotic competition) to celebrated speakers like Dr Mohan C, IBM Fellow; Dr Deepak Aher, Head of Customer Engagement Strategy and Execution at SAP (Technology & Innovation); and Jitendra Chaddah, Chairman, India Electronics and Semiconductor Association (IESA) who will be attending the event. The event also expects to partner with countries like Canada, the US, France, the UK, Australia, Israel, and others.