At Smart India Hackathon, these six students invented a Braille reader for the visually challenged 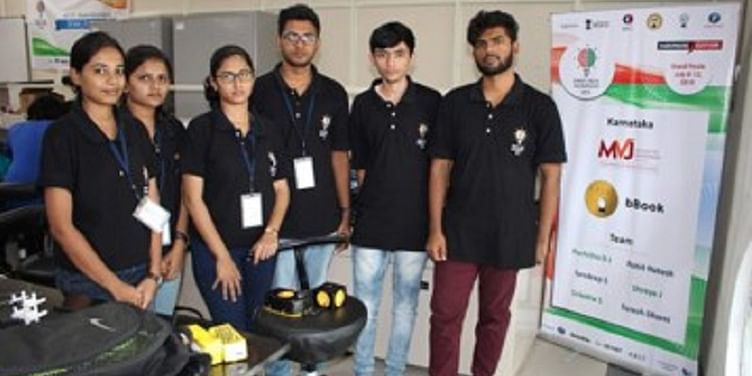 Opening up a whole new world to the visually challenged, a six-member team of 21-year-old students launched bBook, a portable reader that converts digital text to Braille.

In this technology-driven age where digital is the buzzword, we often forget the visually impaired. But at the Smart India Hackathon 2019 edition held at IIT Indore, a team of six students from Bengaluru’s MVJ College of Engineering addressed this problem by developing a digital Braille reader. Their bBook opens up new vistas for the visually challenged.

How the device works?

bBook is essentially a portable handheld Braille reader for the visually challenged. The device can convert any digital text to Braille in real time. Be it online news feeds or a PDF file, the reader produces a Braille output.

A beacon service is also added to the reader to help the visually impaired be conscious of their surroundings. A small Bluetooth device placed in public places is used to transmit signals, and any bBook in the range can detect it, and deliver information in Braille.

All 21 years of age, the team - Ruchitha DJ, Rohit Natesh, Srilekha S, Shreya J, Suresh Kumar Dhami, and Sandeep S – decided to work on bBook after a project submission at college. On visiting a blind school, they realised the problems the visually challenged face due to the lack of means of access to digital information, and their angst at being dependent on others to be aware of their surroundings.

“This is when we decided to make our project idea into a product, which would give the visually impaired the freedom to read any digital information they wanted and move around freely, staying aware of their surroundings. We wanted to bridge the gap of opportunities between the visually impaired and the sighted,” says Ruchitha, the team leader.

The team claims that the bBook is the first of its kind, and hopes it will create a positive impact on the lives of the visually challenged. They also believe that the product can increase literacy rates.

“Miniaturising its size was challenging, and so was making a user understand the product due to the new approach being used to read Braille,” Rohit says.

But they managed to overcome these obstacles and create a device that could help.

The team is keen to launch their product in the market. Initially, they plan to tie up with schools for the visually challenged, and test launch there. They will also make changes after feedback from the test market.

“The bBook is still at the prototype stage, so we cannot set an exact price. However, we are looking at a price within Rs 5,000,” Rohit says.

As the nature of the device is not limited to any region, the team plans to take an aggressive marketing approach after initial market penetration.