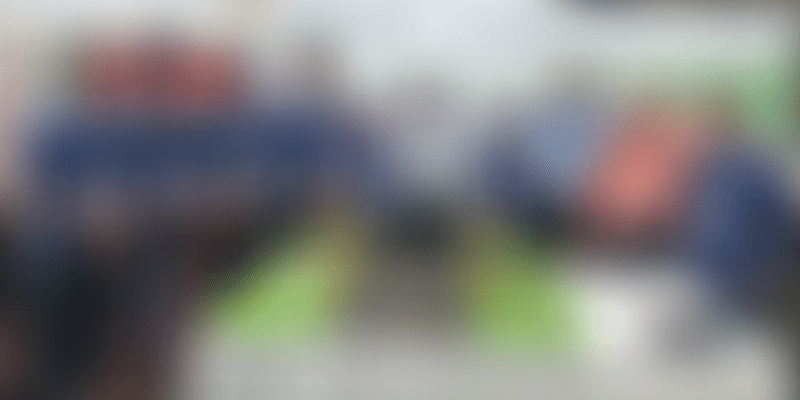 Say farewell to traffic woes with this smart system that Team Quebik won a cash prize for. The system will soon be sensitised to emergencies, ambulances and fire brigades, saving time, and lives.

The Smart India Hackathon 2019 hardware edition held recently was a breeding ground for solutions through innovation. Team Quebik from VIVA Institute of Technology, Maharashtra was among the four teams awarded Rs 1 lakh in the final round.

Held at the Reva University, which was one of the 19 nodal centres for the final, the team addressed an eternal problem facing Indians today – traffic.

Ideating on a solution to tackle being stuck at traffic signals, they built a smart system to understand traffic data and ease gridlocks.

Team Quebik developed an innovative technology, which converts traffic signals into a unified smart system. Leveraging the much-talked-about Internet of Things (IoT), they solved traffic congestion – which is a daily occurrence for the traffic-harassed citizen.

“Every junction (traffic signal) has a camera with Raspberry Pi sensors fixed. This records data like traffic density and type of vehicles on the road. Based on this data, it sets timers on signals and shares this data with other signals,” team leader Tanmay Talele (20) explained.

Now, Tanmay and the team are working towards traffic signals across the city connected with live traffic data on cloud, enabling smart communication. According to the team, it will reduce the weary traffic policeman’s workload, lower traffic violations and prevent road accidents.

With Mumbai, Delhi and Bengaluru on the list of the most congested cities in the world, this technology aspires to solve the untenable traffic situation in our cities. The loss caused by traffic in these cities is estimated to be Rs 1.44 lakh, according to a study conducted by Uber last year. As of 2015, the total number of registered motor vehicles in India was over 200 million.

The smart system will help the traffic department effectively manage situations on the ground. It will also aid the Regional Transport Office in implementing traffic rules, the team explained. With a lesser wait time, it will also reduce carbon emission and fuel consumption.

Yet, in case this smart system fails, plan B involves switching the signal back to the existing pattern.

From one lane to a full-fledged system

The team’s initial attempts were marred by a few challenges. To understand traffic flow and its problems, Tanmay, along with Manish Pawar (20), Aashish Jethwa (18), Nikhil Naidu (18), Juilee Bhombe (19), and Saniya Patil (19) scoured the city and interviewed traffic policemen on duty.

The data of vehicles on the road was collected and tested – whether the camera and sensors were able to identify a simulated traffic signal. The team is now confident that the system is accurate. The students hope to improve the system further by making it more sensitive to emergency cases, ambulances and fire brigades.

Using radio frequency sensors at signals, and implanting receivers in emergency vehicles, the system will detect them from a distance of 5 km, and alert approaching signals - saving time, and lives. While this is yet to be developed, the system is currently built using OpenCV for image processing, firebase cloud for smart communications, Raspberry Pi and other sensors.

The team is proud of the low-cost and effective technology used, and believe that its system can be implemented across India.

Among 16 teams that presented their innovative ideas at Reva University, Quebik was the only team that met Ramesh Pokhriyal, the minister of human resource development, Tanmay said.

Each team member’s contribution with interests in diverse fields - android database, coding in python and user interface (UI) are what brought this product together.

The system will have added the radio frequency sensors in place by September-October 2019.

“We are looking forward to launching this product in the market, and signing a contract with the traffic police as it will play a vital role in the development of smart transportation, and be a part of Digital India. It is most-needed in cities like Bengaluru and Mumbai,” the team concludes.