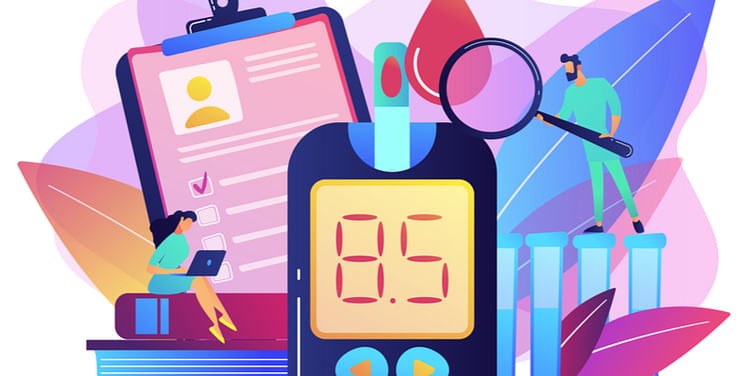 With an alarming rate of diabatic patients in India, six engineering students from Sethu Institute of Technology, Madurai developed a product that will help eliminate the method of painful blood glucose monitoring.

More than 72 million people in India have diabetes according to the International Diabetes Federation. This is 8.8 percent of the population. And this staggering number of diabetic patients require products that help them keep tabs on their blood glucose levels. At present, blood glucose monitoring is painful and invasive.

Hence, taking stock of the status quo, six engineering students from Sethu Institute of Technology, Madurai, came up with a product that eliminates the use of the painful invasive method of blood glucose monitoring.

At the recent Smart India Hackathon held at IIT Delhi, Team Electroboom introduced their product that tests blood glucose levels in a non-invasive manner. It analyses certain target organic compounds like isoprene and acetone, which exhibit inverse proportionality with respect to blood glucose levels. The team won a cash prize of Rs 75,000 as well.

Talking about how the team came up with the idea, 20-year-old team leader S Prithivirajan says,

“We came across a YouTube video featuring a Cambridge University professor presenting isoprene as a biomarker for hypoglycemia. The professor observed the evidence of diabetic guide dogs, to show that the blood glucose level for hypoglycemia patients fall low frequently. We referred to a lot of literature regarding the availability of isoprene sensors and found it difficult to identify a readily available one.”

The team had also approached various researchers, manufacturers, and companies to see if there was any product like this already available. But several of them turned down their request and some of the sensors were not affordable and not suitable for point of care daily usage.

The team has also used Artificial Neural Network trained under a supervised mode of learning to produce results that are on par with the currently available invasive method of blood glucose monitoring.

“The ultimate selling point of our product is the painlessness and comfort in using it. A major advantage is the affordability, which will surely be of value for diabetic patients,” says Prithivirajan.

The team believes that their product will have a phenomenal impact since India has an alarming number of diabetic patients. This product will be able to touch their lives in a way that it is pain-free and comfortable.

The major challenge that the team faced was to identify a sensor with correct sensitivity and selectivity for the two target gases. The team said that this problem could have been avoided if they had used palladium or platinum doped nanostructured SnO2 sensors.

However, at present, due to time constraints and lack of laboratory facilities, the team has decided to go with the alternative low-sensitivity SnO2 sensor.

“But if the fabricated SnO2 sensor is made available for us, we can dramatically improve the sensor performance. Once we fabricate our own sensor, we will develop it as a product,” explains Prithivirajan.

The team’s future plans include creating awareness about their non-invasive blood glucose monitoring system and to launch the product in the market subsequently.

The present government under Narendra Modi has been trying to build a strong spirit of innovation among young minds, especially students. To further this initiative, the government started Smart India Hackathon (SIH) in 2017 and recently concluded its third chapter successfully.

YourStory brings to you some amazing young minds who have taken up the challenge to solve some of the country's problems.