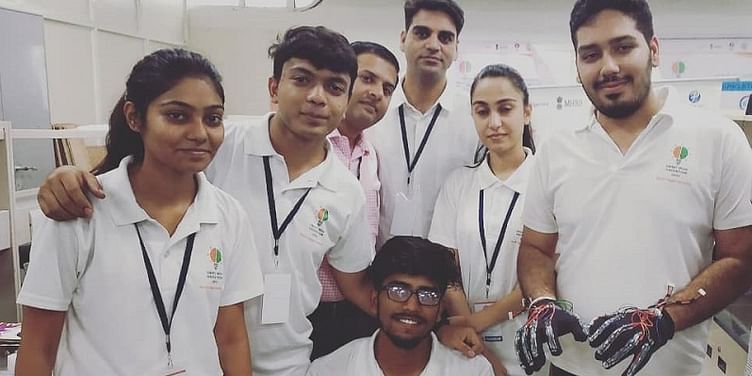 Communication barriers are a big hindrance for people with hearing and speech impairments. With an aim to help them overcome this barrier, Team Slayer’s from Dronacharya College of Engineering, Gurugram developed Smart Gloves at the Smart India Hackathon 2019, held at IIT Indore.

Built by six engineering students, Smart Gloves are electronic devices that can translate sign language into text and speech. It contains bend sensors along the length of each finger, which will be used to project gestures. These gloves have pre-recorded gestures that, when performed by a disabled person, will produce corresponding audio as well as a text output through an Android application built by the team.

“In replacement to flex sensors that have been used by the prior research works, we developed our own bend sensors using the IR transmitter and receiver having comparably low cost, keeping in mind the economic capability of common people. Furthermore, the final product can be fruitful for its application in health monitoring system,” says 20-year-old team leader Shreya Kumari Pandey.

The team was travelling on a train when they saw a person with a speech impairment trying to communicate with them. But they were unable to understand his sign language.

“This incident left a deep impact on us. Then, we came up the idea of developing a helping aid. While researching, we found that the main problem they are facing today is the lack of idea exchange and people who have ideas are not fortunate enough to communicate properly. So, we came up with Smart Gloves, which solves this problem very effectively,” says Shreya.

Smart Glove is based on embedded technologies. The team used Arduino’s nano and bend sensors that give the respective output through gestures made by the user.

“The practical application is specifically for people with speech and hearing impairments. As a product, this will revolutionise the act of communication for these people through sign language, giving the visual and audio output via an application,” she says.

Team Slayer’s claims its product’s USP is in its low-cost, easy implementation, portability, and targeted audience.

However, the students faced certain challenges while building the product. Getting the right output for the respective gesture made by the user was one. Bluetooth interfacing with the application, increasing the dataset and managing it and synchronising gestures made by both hands at the same time were other technological challenges.

Despite these, the team is looking forward to launching the product in the market with some modifications.

Until now, the team was using the gestures made by fingers only. But now, the students working on implementing the use of an accelerometer or a gyroscope for the wrist and hand movement as well.

“In future, we could replace the whole hardware component with just the application and using machine learning and image recognition. This will actually increase the accuracy and efficiency of the product and could be consumed by a larger audience,” explains Shreya.

The present government under Narendra Modi has been trying to build a strong spirit of innovation among young minds, especially students. To further this initiative, the government started Smart India Hackathon (SIH) in 2017 and recently concluded its third chapter successfully. YourStory brings to you some amazing young minds who have taken up the challenge to solve some of the country's problems.

Fighting deafness everyday – life and struggles of an audiologist