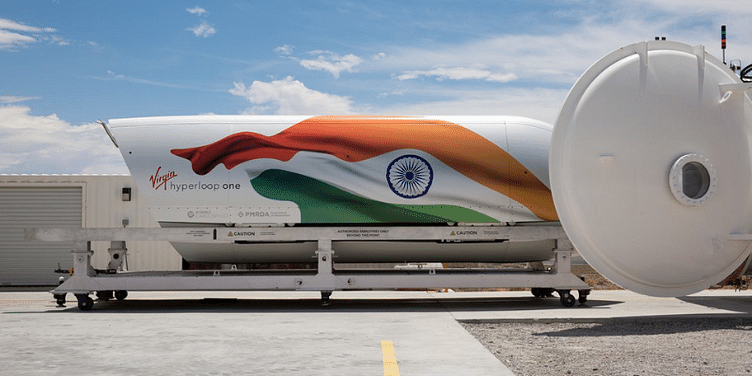 Hyperloop is an ultramodern, superfast transport project to link Mumbai and Pune, located 200 km apart, shrinking travel time to around 25 minutes from the present three hours.

Virgin Hyperloop One said Maharashtra's nod to form a consortium of DP World and Hyperloop Technologies for its maiden project to connect Mumbai with Pune is the first of the many key steps towards bringing the new transportation technology to the masses.

Hyperloop is an ultramodern, superfast transport project to link Mumbai and Pune, located around 200 km apart, shrinking travel time to around 25 minutes from the present three hours.

The Maharashtra government had on Tuesday given the infrastructure status to the Mumbai-Pune hyperloop project that seeks to reduce the travel time between the two cities to just 23 minutes. It also approved formation of a consortium of DP World FZE and Hyperloop Technologies as proponents of the original project.

"The race is on to host the first hyperloop transportation system in the world, and today's announcement puts India firmly in the lead. This is a significant milestone and the first of many important steps toward bringing hyperloop to the masses."

"We look forward to participating in the public procurement process and bringing this revolutionary new transport technology to the world," he added.

The hyperloop train will run from BKC in Mumbai to Wakadin in Pune, covering a distance of 117.5 km, at a speed of 496 kmph and cover the distance in just 23 minutes.

"Maharashtra will create the first hyperloop transportation system in the world and a global hyperloop supply chain starting from Pune.

"We have just named DP World-Virgin Hyperloop One consortium as the original project proponent for the Mumbai- Pune hyperloop project and preparing to start the public procurement process," the release quoted Chief Minister Devendra Fadnavis as saying.

The FDI in the entire project, which will take seven years for completion, is to the tune of Rs 70,000 crore, as per the government.

In the first phase, the project will be run on a pilot basis for 11.8 km in the Pune metropolitan region at a cost of Rs 5,000 crore, the government statement said.

According to the release, there are around 75 million passenger journeys between Mumbai and Pune annually, which is expected to grow to 130 million by 2026.

Virgin Hyperloop One's system can meet this growing demand by supporting as many as 200 million passengers annually, linking central Pune and Mumbai in under 35 minutes, the release stated.

"Support for hyperloop transportation systems is mounting across the world and India has led the charge to bring hyperloop to fruition since the early stages of development," said Sultan Ahmed bin Sulayem, Group Chairman and Chief Executive of DP World, and Chairman Virgin Hyperloop One.

DP World, a global trade leader and a major ports and logistics operator in the country, is set to invest $500 million in private capital to complete Phase I of the project, which will certify this new technology for passenger operations, establishing India as the epicentre of hyperloop innovation without using public funds, the release stated.

"Once commercialised, it will transform the Pune- Mumbai corridor into a mega-economic region moving people and cargo between these two centers in a cost-effective and sustainable manner.