How this 18-year-old wants to reshape the restaurant experience with Natasha, his robot server 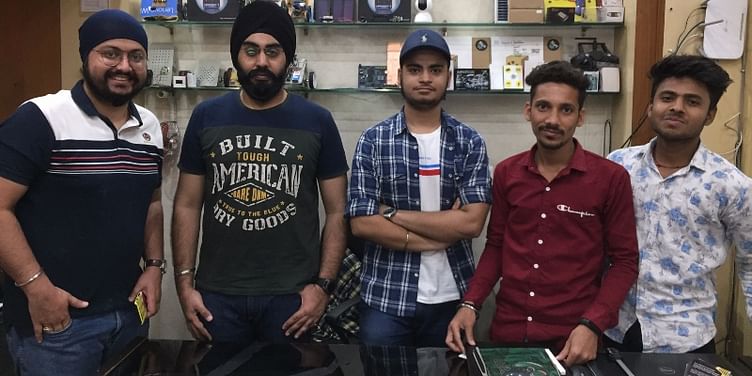 Robots may soon be integral to restaurants across the world. Gyan Singh Matta, a high school pass out, has built Natasha, a AI-powered server that can pick up orders from the kitchen and serve to the customers in a restaurant.

When Gyan Singh Matta was in Class VII at St Mark’s School, few years back he was fascinated by the robotics club. As a member, the young student began tinkering with different projects and ideas. Today, one of them, a humanoid robot server, is fully functional and has been tested at a few restaurants in Delhi.

But getting Natasha, his robot, to this stage took a while.

It was during his school days that the thought came to Gyan: how cool would it be if a robot served food at a restaurant? “From then on, I had just one thought in my head. I wanted to design a robot that could do that,” he says.

Gyan went on to finish his last year at school, and considered future options, including pursuing a master’s degree abroad. However, he had to take a break for a year due to personal reasons.

“During this break, I started working on my dream,” he says, adding that he roped in a few friends and his family of five. They helped Gyan with networking, and building the robot.

[Startup Bharat] Gripr from Kutch-based Author Form helps you get a better hold of your smartph...

It took four months to prototype and test the robot, which cost about Rs 60,000 to build. For this, he pooled in his savings and took help from his family.

How does Natasha work? The robot follows a black line in the restaurant, which . Using IR sensors from the kitchen to selected table numbers, it picks up the order and serves it to the customer. “After the food is served, the customer presses an exit button, which prompts the robot to return to the kitchen,” Gyan explains.

The table numbers are selected using a mobile or tablet app, which is connected to the robot though bluetooth.

“The robot is also fitted with ultrasonic sensors to sense obstacles. There is a speed controller to select its pace. It can also voice an audio output before and after serving food,” Gyan says.

Gyan and his team decided to use the mannequin structure as it was hollow, and helped fit in the intricate bot machinery. They first installed motors, then the front wheel with a grip; they used wheels used on suitcases for the back wheels. This enables the bot to move 360 degrees.

“Initially, we used one ball caster wheel for the back, and for turning. It failed as it was not able to handle the weight, or help the robot turn. That’s when we thought of using suitcase wheels as they can handle heavy weights. It still didn’t work,” Gyan recalls.

He decided to change the complete structure and make it light weight. The team changed the programming for added stability, and finally added ultrasonic sensors for obstacles.

Bengaluru startup Jumbotail is digitising the kirana store with its wholesale online marketplac...

While the robot is yet to be deployed, Gyan has tested the bot at a few eateries, including Monga Sweet House in New Delhi.

Varun Monga, the proprietor, says, “The bot is a great idea for eateries. And it is great that these pleasant young people have taken a shot at it. It attracts more clients as it is an exceptionally new idea, and will work well at top notch cafés.”

The idea of robots serving in restaurants is fast catching up in India as well. Robot, a restaurant in Chennai’s Porur area, uses robots that can speak English and Tamil as servers. In Kerala’s Kannur district, robot waitresses Aleena, Helen, and Jane serve and attend to tables at Be@Kiwizo. Robot Kitchen, in Hyderabad's Jubilee Hills, has become the talk of the town with its robot hostess, which seats them at tables. A team of four robot servers then takes orders, and serves meals and drinks.

The robots in these restaurants cost approximately Rs 5 lakh.

While robots in hospitality is still nascent in India, in Japan, the government has spent $265,000 towards building robo chefs and servers. According to a Reuters report, AI in the food and beverage industry is growing at a CAGR of 42.18 percent. A study by the Center for an Urban Future found that the automation potential for waiters and waitresses is as high as 77 percent.

While Gyan is yet to monetise his robot, he is already ideating on a VR-based dressing mirror. He will also soon start a BCA course, and plans to continue to work on other AI-based products.

Meanwhile, you may run into Natasha at a restaurant near you!

Why this investment banker aspirant decided to manufacture notebooks and paper products instead...