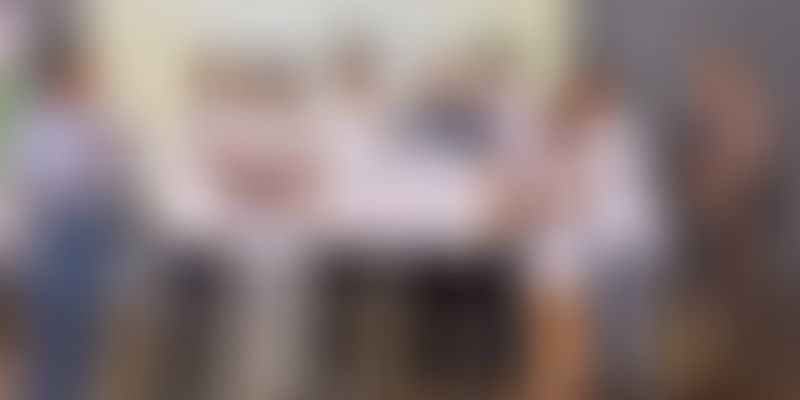 At the third edition of Smart India Hackathon, six students from Aligarh’s Zakir Husain College of Engineering and Technology have built an evaporative cooling system for tractors using natural and forced draft technology.

Agriculture and its allied activities act as the main source of livelihood for most people in rural India. While people working is corporate setups in cities have the luxury of air-conditioned rooms, the farmers in rural areas work all day in the hot sun, their faces covered with dust and sweat.

To make their lives a little more comfortable, team AgriBOTICS from Zakir Husain College of Engineering and Technology, Aligarh has built a low-cost cooling system for tractors using ‘evaporative cooling by natural and forced draft technology’.

“Our problem statement was given by Mahindra & Mahindra. We needed to make a cost-efficient tractor cabin cooling system,” says Aman Gupta, the team leader.

A final year electrical engineering student, Aman got to know about the Smart India Hackathon, and then conducted interviews in his college and built team AgriBOTICS.

After submitting their presentation and project overview in January this year, team AgriBOTICS were declared the finalists under the Hardware category. They presented their solution at nodal centre FORGE Coimbatore in Tamil Nadu. AgriBOTICS has also won cash prize of Rs 75,000.

The team has used a blower, honeycomb pad, and centrifugal pump to build the solution.

It has installed a water reservoir in the cabin, and with the help of a centrifugal pump, water is circulated in the honeycomb pad system to cool the chamber. The blower will further help in cooling and lowering the temperature inside the tractor cabin.

“The solution will reduce the temperature inside the cabin and thus, let the farmers working for more hours in the field, especially during summers,” Aman says.

The team initially faced challenges in finding a few components in Aligarh, and they had to source some from Delhi and fabricate the rest in their college.

Further, they had their final examinations on during the submission of the prototype video. “But with hard work and determination, we submitted it before the deadline,” Aman adds.

Talking about their USP, Aman said their solution is “cost-efficient, easy to implement, easy to install, has a low running cost, and leaves behind zero carbon footprint.”

Now, team AgriBOTICS plans to launch the product soon. While their problem statement was initially for the Northern American agricultural sector, the team has built the solution keeping the Indian farmers in mind.

As Indian tractors do not come with a cabin, the team plans to price the solution along with the cabin between Rs 30,000 and Rs 35,000. The solution alone will cost Rs 8,000.

“We are planning to start up and establish an R&D centre in our company,” Aman says.

The present government at the Centre has been trying to build a strong spirit of innovation among young minds, especially students. To further this initiative, the government started Smart India Hackathon (SIH) in 2017, and recently concluded its third chapter successfully.

Inspired by NASA’s Curiosity Robot, engineering students and grads team up to design a surveill...