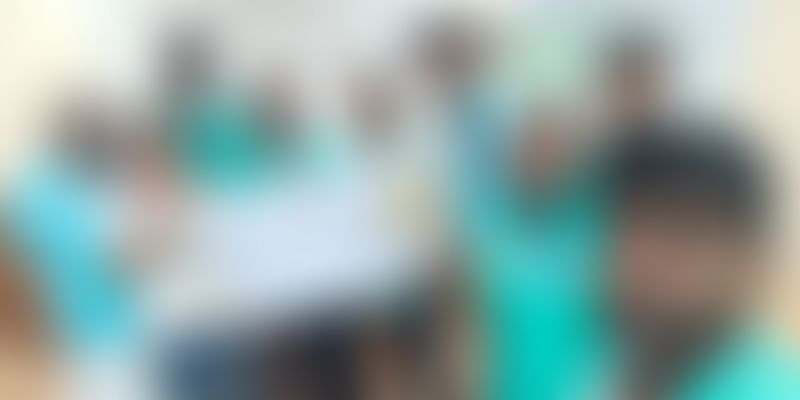 Hyderabad’s team Enigma 99 has built a low-cost, easy-to-implement fuel tank device that notifies the owner through SMS or call whenever their vehicle’s fuel tank is in use.

Trucks and lorries have to travel long distances. According to media reports, the average distance covered by a truck in India is 150 kilometres per day. Unsurprisingly, drivers need to park their vehicles on highways to either get some sleep or freshen up. It is during these breaks that most number of fuel theft take place. In the cloak of darkness, it is easier for thieves to access the fuel tanks and steal.

At the third edition of Smart India Hackathon, these fourth-year students from the Electronic and Communications Department, received a problem statement – to protect fuel theft from trucks and Heavy Earth Moving Machinery (HEMM).

Team Enigma 99, comprising Rohan Vamshi G, Robin Wilson, K Santhosh Kumar, Rohit Patil, A Sahithi, and T Rasagna, is a group of friends who have been together since their first year at college. Before this hackathon, the six had already worked on several projects together. In fact, they are now building an electric bicycle.

Inspired by NASA’s Curiosity Robot, engineering students and grads team up to design a surveill...

“When we received the problem statement last December, we instantly connected with it,” says Rohan, the team leader.

The students spoke to various truck owners and drivers to understand the possible ways to break in and steal fuel from tanks - inserting a pipe through the cap and sucking the fuel out, digging holes in the fuel tank, and travel agencies who take a challan for higher quantity of oil from petrol pumps.

Then, Team Enigma 99 built an Internet of Things (IoT) based fuel tank guard that can monitor fuel theft. In-built sensor in the trucks records the value of the float valve. However, that value is not always accurate or absolute. For that, the team has built a  device with industry-grade sensors  and a three levelled aluminium structure that one has to break through to open a tank. This device is attached to the mouth of the tank.

“Every time there is movement near the metal structure or when someone tries to open the oil tank, a buzzer will go off and the truck or HEMM owner will be notified through SMS or a call,” Rohan says.

While there are other anti-fuel theft devices available in the market, Rohan says that their USP lies in the fact that their device is low-cost, easy to implement, and suitable for both new and old vehicles.

“It was challenging to calibrate the floating sensor in the moving vehicle but we have worked around it,” he adds.

The in-built sensor of a truck gives only the basic values of fuel levels and is not accurate. The team programmed their sensor to give accurate results. Team Enigma 99 plans to price its product at Rs 1,500 and sell it to agencies managing trucks and HEMMs.

“We are ready with the MVP but are still working around the business model,” Rohan says.

In fact, the six want to start up after graduation and have this fuel tank guard as their first product.

Because of their solution, Team Enigma 99 were announced as one of the finalists of SIH 2019 – Hardware edition, and won Rs 1 lakh cash prize.

The present government under Narendra Modi has been trying to build a strong spirit of innovation among young minds, especially students. To further this initiative, the government started Smart India Hackathon (SIH) in 2017 and recently concluded its third chapter successfully.

YourStory brings to you some amazing young minds who have taken up the challenge to solve some of the country's problem.

These students are working on a device to minimise road accidents by detecting pedestrian prese...