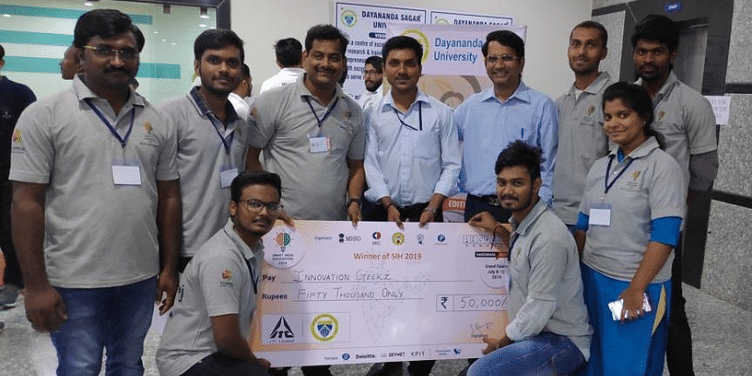 Engineering students from Andhra Pradesh have created a device that identifies spoilt shrimp in a package. This student innovation won a cash prize of Rs 50,000 at the Smart India Hackathon 2019 - Hardware edition.

The freshness of shrimp has a direct impact on the health of a consumer. Thus, it is quite important to be able to gauge if the shrimp has turned.

Team Innovation Geekz from Vishnu Institute of Technology in Kovvada, Andhra Pradesh decided to address this problem, and got to the bottom of the freshness ladder at the Smart India Hackathon 2019 - Hardware edition that was held in 19 nodal centres across India. They presented the technology at the Dayananda Sagar College of Engineering in Bengaluru, and won Rs 50,000 for their food tech innovation.

Intrigued by the problem statement presented by ITC Limited, G Phani Chandra (22), the leader of Innovation Geekz, and the members thought up a solution - to develop an advanced food packaging technology that could detect the freshness of shrimp. It made the team think about developing such a product for the people in Bhimavaram, and other regions as well.

“The main source of income for people in our locality is from exporting seafood, especially shrimp. But, they follow the traditional way of exporting to other nations, and chances are that the shrimp might go bad before they reach a customer,” the team members say.

The team members also included GSMK Rachel (21), M Prem Kumar (22), KA Dheeraj Neegar (22), B Sai Rakesh (22) and KSV Tarun (20). They ideated on digitally reading the freshness of shrimp. This was done by digitalising the traditional box packaging of frozen shrimp, which can be read on a mobile application that they developed.

Steeped in innovation, this chai decoction machine by engineering students lets you sip on herb...

When we go to the fish market, our parents are always checking if the shrimp is fresh. They try to smell, and check their colour. With this box, buyers do not have to touch the shrimp to check for freshness,” explains Phani.

Much ado about stale shrimp

The technology might not be applicable to other food items or even other seafood as different chemical compositions exhibit different properties.

Everyone recognises the foul smell emanating from stale shrimp. The smell is of the gas ammonia. The more one smells ammonia, the less likely the shrimp is fresh.

This is where the team found a lead, and attached two different sensors to detect ammonia content, and temperature inside the packaging. The sensors used were Mq135 and Ds18b20, respectively.

They believe that these indications make the technology valuable, especially in the long-distance export of shrimp, which is how many non-coastal markets get their revenue in India.

A long way to the home market

In six to eight months, the prototype will be ready for market penetration, the team says.

To ensure that their innovation solves real issues faced at the ground level, the team also visited local marine industries to understand the problems faced by the industry.

“We started developing the product with the industry perspective in mind. In addition, we also wanted to develop a better customer-product communication using IOT,” the team adds.

While the current expenditure on a unit of the product remains Rs 460, the team is looking for alternative sensors for a cheaper price point. They hope to launch it at less than Rs 250 per unit, to provide an economical and efficient option.

Their initial investment was Rs 12,000, which was spent on experimenting between various sensors and micro controllers.

Overcoming one challenge at a time

It’s been four months of constant work, and it has been challenging. In building a monitoring device with the seafood’s shipment in mind, they wanted to make the box lighter, while incorporating the necessary devices. Another major concern was point of accuracy, which they are still working on.

“Accuracy in readings is important in the seafood sector as it indirectly relates to the health and lives of a consumer,” the team adds.

The students’ hometown Bhimavaram is located in the Godavari district, and current Finance Minister Nirmala Sitharaman had developed the city as a centre of excellence in seafood and aqua exports when she was Minister of State for Commerce and Industry. The students were sure of one thing - the technology would find a market in their city. And in others.

About their participation in the SIH, which is a Central government-initiated competition to instill and foster innovation among students, the team says,

“It is encouraging for students looking for a platform to implement innovative ideas. It will also inspire others to work on ground-breaking ideas. We’ve learnt many things, and we came across various problems that were solved by teams, all for the good of the people.”

The members now hope to build a startup soon, and also work towards developing solutions using tech. Currently, they are ideating on a drone project for women’s safety.