Steeped in innovation, this chai decoction machine by engineering students lets you sip on herbal teas 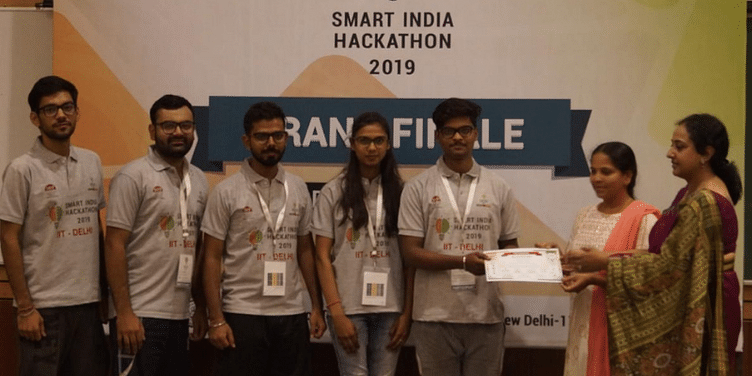 Chaiwallahs can soon pour herbal extracts from an automated tea dispenser that these students from Jaipur have designed. The one-of-a-kind machine celebrates the healing qualities of herbal tea.

As much as the world progresses, it also stays rooted in traditional wisdom. Especially when it comes to the healing powers of herbs. These herbal brews often made from barks, roots, and seeds were what Team Tronix Thunder from Jaipur decided to innovate upon. They created a tea decoction brewing machine, which, surprisingly enough for a tea drinking nation, is not available in the market.

To make herbal brews easily available, they invented this new machine where one can use powdered herbs of their choice and make a brew of it.

The students from Swami Keshvanand Institute of Technology in Jaipur showcased the brewing machine at IIT Delhi, a nodal centre for Smart India Hackathon 2019 - Hardware edition. The team bagged Rs 50,000 in the category of simple solution.

Tronix Thunder was led by Chandan Kumar Prajapati (21), and also included Mahima Bhoi (20) who had earlier worked together on various projects. The other members were Rajat Sharma (20), Prageet Sharma (21), Gaurav Chaudhary (22), and Pranshu Gupta (21), who all incidentally came on board when they decided to work on a fully automated decoction vending machine upon realising that such a machine is not available in India, despite the country being a large market for herbal brew and tea.

The problem, and their brew solution

According to a study conducted in 2012, herbs like Ashwagandha roots can relieve stress by about 44 percent, so the team were on the right track.

The students invented a decoction vending machine that can prepare a brew in less than three minutes.

The idea, the team says, was to make herbal brews easily available on-the-go at hospitals, old-age homes, Ayurvedic shops, gyms and in the comfort of one’s home as well.

Now, health seekers could get a nicely brewed cup of tea, quite like their coffee.

Ideating for the machine

A pre-heating chamber, with the capacity to contain up to five litres water, will keep the water heated at 50 to 60 degree Celsius. It releases water into a mixing chamber that can store up to a litre, where water is then boiled for 50 seconds. Users can set the preferred quantity of brew on a Potentiometer, and based on the quantity, the canister controls the amount of decoction poured.

“The Canister uses a motor that releases a fixed amount, say 10mg, for every 250 ml of brew,” explained Chandan.

The remaining part filters the residue, and drains it for servicing purposes.

While the team is enthusiastic about automation and robotics, the past four to five months was not all fun and games. To get the pre-heating chambers in place, the students alternated between a number of heating options - magnetron, peltier, and induction. They also had to deal with clogging on the Canister’s nozzle due to steam.

The fact that the product is not available in the Indian market was a huge impetus for the team. Now, they plan on going commercial with their machine.

“We are looking to market it online, and spread awareness through social media, and then install it in government hospitals. We are also targeting public places through vendors or shopkeepers with a profit-sharing option,” the team says.

Before entering the market, they hope to make their vending machine commercially viable by attaching a device where users can pay per use, thus doing away with human monitoring. They also want to use motors of higher quality to make the machine more efficient.

The only similar brewing machine in the market right now is available in China, and is priced at around Rs 1.5 lakh. Their initial investment was around Rs 15,000 to Rs 20,000, and hearteningly, each member contributed Rs 3,000. Once the machine is ready to hit the market, the team is thinking of pricing it economically between Rs 13,000 and Rs 16,000.