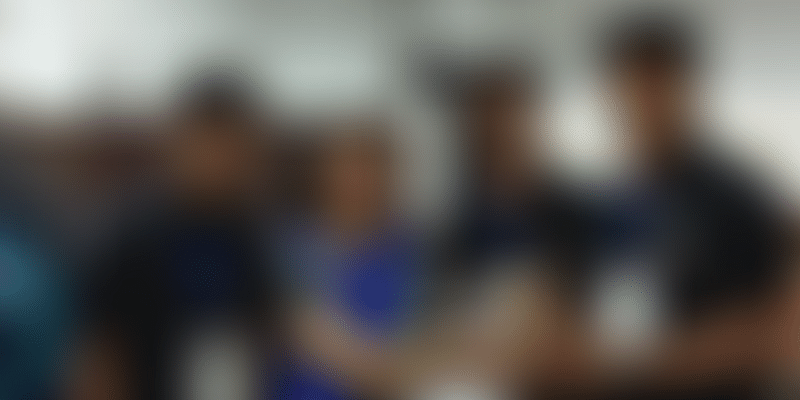 Every year, around 1.5 lakh people die due to road accidents in India. While the government has taken steps to reduce fatalities, there is still much to be done.

Six students decided to tackle the growing number of deaths on Indian roads with their solution that aims to reduce fatalities for bike riders. Team Safety Giants designed a smart helmet that alerts family members on the rider’s location. It also relays various biological parameters back to the family members in case of accidents. They showcased their prototype at the Smart India Hackathon 2019-Hardware edition’s nodal centre IIT Roorkee, which was among the 19 nodal centres for the competition across India. The team won a Rs 50,000 cash prize.

The students, all from RC Patel Institute of Technology at Shirpur included Mitesh Patil (20), Bharat Khairnar (21), Suraj Paliwal (22), Pardeshi Divya (21), Rupesh Sonawane (21) and Pooja Kadam (21) – had started working on a similar innovation when they were a part of the KPIT competition in Pune during their third year engineering. All the members are from the telecommunication branch except for Suraj Paliwal, who is studying computer engineering.

“We tried to develop the same project, but couldn’t finish it as we fell short at the presentation. But the lessons learnt were used at SIH for our prototype,” says Mitesh Patil, the team lead.

Often, in case of an accident, loved ones don’t get the news immediately.

With our smart helmet, family members get details of various parameters - body temperature, alcohol detection, eye blinking, heart rate, and GPS locations. We have mounted various sensors inside the helmet. Parents can use this app to get details of their child whenever he is on a bike. Even if the rider is being rash or riding sideways, family members will be apprised of the extent of the tilt, rashness, etc,” Mitesh says.

Adding more about their innovation, Mitesh says, “We have named the helmet - Free Safety Helmet. If a rider meets with an accident, a text is sent to the family. A list of hospitals near the accident site are also made available to the family to save time, and connect with their loved ones swiftly.”

The second additional innovation the students have added to the helmet is controlling the speed limit. They added another sensor which is fixed near the tyre, and measures speed. Whenever a rider crosses the speed limit, the mechanism kicks into action, and the speed of the bike gradually returns to the set speed limit using the help of an accelerator wire.

The journey to success saw Team Safety Giants encounter innumerable hurdles. There was the pressure to sit for placements after their final year instead of concentrating on this project. “A placement camp was held at our college, and the college authorities wanted us to scout for suitable company jobs. But, we decided to go ahead with the project – a smart helmet instead of looking for a placement.

After consulting with their parents, three students (Mitesh Patil, Bharat Khairnar, and Suraj Paliwal) decided to go to Roorkee for the SIH. They arranged their own transportation. Unlike most teams at the SIH that had six to eight members, Safety Giants had only three at the nodal centre. SIH then nominated a mentor, Varsa Bapat, to help the team.

The trio stayed at IIT Roorkee for five days, presented their idea, won an award, and when they finally announced the award to the college authorities, the administration was proud of their success.

While Mitesh discovered the idea, Suraj took charge of software part, Pooja and Divya worked on the application part. Rupesh handled the video and editing, while Bharat took charge of hardware. The technologies used in the project are sensors like heartbeat sensors, accelerometer sensors, body temperature sensors, IR sensors for eyes, etc.

The students also say, that winning the SIH award was a huge morale booster. “We are planning to start our own company, and are right now looking for some funding. Manufacturing these helmets will cost us approximately Rs 1,400 – Rs 1,500 per unit,” says Mitesh.

To instill and foster innovation among students, the Central government started the Smart India Hackathon (SIH) in 2017, and recently concluded the third edition successfully.

YourStory brings to you some amazing young minds and their innovations which solve many of the country’s issues across various streams.