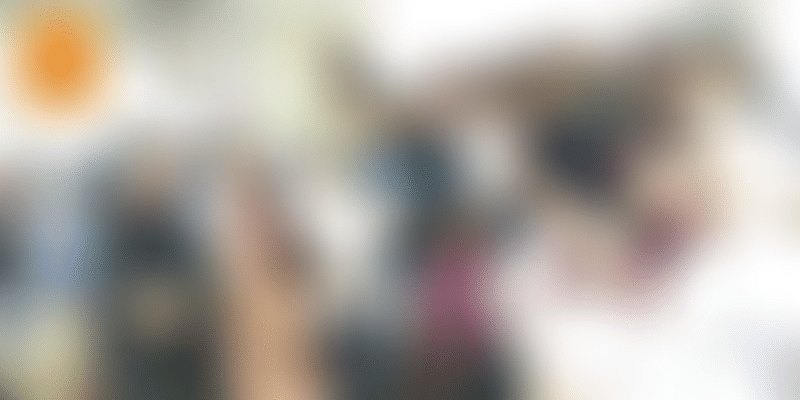 Wishbook, founded in 2016, is a Surat-based B2B wholesale ecommerce startup that digitises the distribution chain for small apparel retailers.

Arvind Saraf, an ex-Googler, decided to start Wishbook in Surat when we saw the dire need for technological intervention in apparel distribution in the country.

With the onset of ecommerce, we as customers, are spoilt for choice when it comes to branded retail. But the over 30-odd lakh smaller retailers across the country dealing in unbranded apparel are navigating the largely unorganised segment of the retail sector.

Owning a single store and employing around five people, they lack the competitive edge, and are unable to tap the latest styles and trends like their bigger, branded counterparts.

Enter Arvind’s startup, which came into being in 2016. Surat-based Wishbook digitises the apparel distribution chain for small retailers, with the platform taking responsibility for payment, fulfilment, and logistics.

The manufacturers, in turn, can use the Wishbook app to manage their existing offline channels digitally, including sharing catalogues, taking in orders, payments, field force tracking, and credit quality.

An IIT Roorkee and Massachusetts Institute of Technology alumnus, 39-year old Arvind was working at Google since 2005. But in 2008, he quit his job as he wanted to start something on his own to solve problems in Tier-II and III India.

So he started Swasth India, which received funding from Ratan Tata. It was a healthcare startup focussed on making healthcare accessible to rural India. He exited the company in 2011.

After his exit from Swasth, Arvind started looking closely at the problem of small apparel retailers.

“On trips back home, dinner table conversations would be around their business challenges. Having seen a more corporate sector approach, which is data-driven and organised, I felt the need to bring a similar level of visibility to this industry,” says Arvind.

It was then that he decided to work on Wishbook. But before starting up, he first to join the family-owned apparel business to understand the nuances of the industry. Arvind then realised the need to bring in transparency and efficiency through data and analytics.

With the rise of tech and data-powered retail chains and B2C ecommerce giants, customers now demand the latest fashion trends, and quickly. It has put retail fashion showrooms and boutiques on the back foot. And existing wholesale channels lack visibility on channel sales.

[Startup Bharat] Nagpur-based Nativ Chefs is grabbing a bite of the foodtech space by offering ...

This brings up the need for B2B transaction data to be brought together on a single platform with discovery between manufacturers and retailers to drive up the adoption.

Arvind further notes that while fashion styles in local supplier hubs like Surat and Ahmedabad may not be up to date, to begin with, the problem is further compounded by the lack of connection retailers and their brokers have with the apparel hubs.

“With the prevalence and adoption of smartphones and WhatsApp, building an app first was a natural choice. Also, sitting in the manufacturing hub of Surat and being a prospective user myself, the product-market fit was easily validated,” explains Arvind.

So, what does Wishbook do?

Wishbook works as a SaaS-enabled marketplace that leverages machine learning-based recommendation systems, analytics-driven supplier feedback based on credit ratings, and time series analysis based on trends to bring in a much higher level of efficiency.

"To give the competitive edge back to the fashion retail stores and boutiques, Wishbook is disrupting the supply and distribution in the textile industry,” says Arvind.

The platform comprises the wholesale marketplace app, which allows retailers to discover and purchase the latest fashion for women from the best manufacturers across the country, Arvind explains.

Wishbook’s channel sales platform allows a manufacturer or wholesaler to manage their existing offline sales platform, including trade terms with buyers or suppliers, catalogue sharing, orders and payments, and field salesman tracking, all on the same application.

Retailers also get sales tools and services in the form of their own website creation with a single click, push to other B2C ecommerce websites, drop-ship to their end-customers, etc.

“Most of our buyers are doing B2B transactions on a digital platform for the first time, but our product curation and product matching for offline use case eases this uptake and adoption. For marketplace orders, we charge our suppliers a percentage on the value of goods sold through our platform. The SaaS will be priced on a subscription pricing to merchants based on the size of their network when we do start monetising it,” Arvind adds.

The marketplace buyers are small retailers who make monthly sales of Rs 2 lakh to Rs 10 lakh, or social sellers. Wishbook's core team consists of four people at the moment. The team refused to share the total number of sellers on the platform.

The startup claims to have seen a 3X growth in the past six months and is expected to grow another 2X in the next three months. Arvind adds that Wishbook is maintaining a healthy 12 percent gross margin. The team claims to be clocking an annualised GMV of Rs 15 crore.

According to Anarock Retail consultancy, the offline retail market in India will be worth $1.3 trillion by 2020. India is the sixth largest grocery market in the world, and less than five percent of the retail stores are organised.

Titans like Walmart, and startups like Udaan, Bizom, ShopX, Gramfactory, ShopKirana, and Smerkato are all working in the B2B space, but under different business models. Wishbook counts Info Edge as its investor.

As a marketplace, the team intends to roll out a credit line and further apparel sub-categories, aiming for a 15X growth in GMV in the next one year. “We intend to become the largest pool of credit-rated fashion retailers,” says Arvind.

He adds their goal is to be the first landing point for a fashion manufacturer or retailer, with them having their entire sales - offline or through digital marketplaces - on Wishbook.