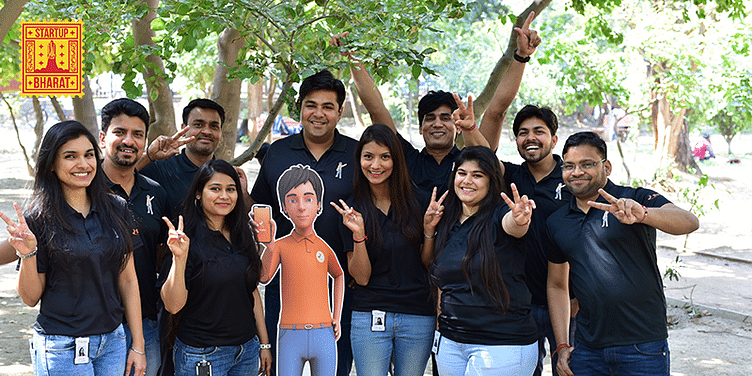 Delhi-based RevFin is a digital lending platform that makes getting a loan convenient and accessible for customers in Tier II and III towns. It aims to primarily facilitate electric and clean tech vehicle loans.

Who knew that a simple 15-minute loan application through an app could change your entire life? Mahesh Kumar definitely did not. At least not until he tried the RevFin app.

A barber for 16 years, Mahesh was struggling to make ends meet. He felt that driving an autorickshaw could help bring in additional income. But getting a vehicle loan seemed tough for someone earning a daily wage. Until he was introduced to digital lending platform RevFin. Today, Mahesh runs an autorickshaw, earns Rs 700 per day, and has enough funds to educate his children.

Delhi-based RevFin was founded by Sameer Aggarwal, an alumnus of IIT Kharagpur who has worked in the lending space for nearly 13 years in over 20 countries. Most of which were spent working in London with HSBC.

On his return to India, he aimed at improving the problem of “financial inclusion” by providing better financial services to the unbanked population and started RevFin in October 2018.

Speaking of why he decided to start up, Sameer says while he was making a transition from a large bank with a prime customer base to a lower income strata customer base in the UK, he realised that traditional banking methods of underwriting using credit bureau and banking transaction data did not work in this population base.

“I experimented with many ideas like psychometrics, machine learning algorithms, and gamification. During a holiday in India, I researched the consumer lending market here and found that the availability and quality of credit bureau and banking transaction data in India, even for prime customer base, had similarities with the lower income base in the UK,” Sameer says.

It was then he realised that a lending platform that relies on traditional credit bureau and banking transaction data was not scalable. Sameer explains that such platforms cannot underwrite customers who do not have online data or information.

“A truly globally scalable lending platform must rely not on third party data, but data that can be generated by a user through engagement with the lending platform. Thus the idea of biometrics, psychometrics, and gamification came about. Every user can create data specific to them during a loan application journey, irrespective of where they are,” Sameer says.

“An example of this is electric rickshaw financing that we have so far done in Haryana, Punjab, Rajasthan, Uttarakhand, Delhi, West Bengal, Uttar Pradesh, and Bihar,” Sameer says.

The loan application process happens entirely through the company’s iOS and Android apps. A customer can download the app, and register using their mobile phone number and email address.

The platform uses two forms of ID documents for KYC.

“We use a combination of psychometrics and biometrics for user authentication and assessing their intention to repay. We also use credit bureau and bank transactional data to determine a customer’s ability to repay. All this is done using proprietary algorithms,” Sameer says.

A customer gets a loan decision instantly within the app, where they can also sign their loan agreement. Disbursal of loans happens directly to a customer’s bank account and the bank account is used to repay the loan using auto debit mandate (NACH).

What does RevFin offer?

RevFin’s first product is a loan that can be availed for any purpose, like financing an electric vehicle, in the case of Mahesh Kumar. The customer pays in equal monthly installments to repay the loan. The core customers are individuals who purchase electric vehicles (two- and three-wheelers) for commercial or domestic purpose.

Their other product is RevLoan, a revolving line of credit that customers can use at any point of time. It’s similar to a small overdraft, but customers have to pay only for what they use.

What makes the fintech startup stand out in what’s now a crowded market is their striking feature of gamification. Through this feature, complicated details are collected by demonstrating them with animated pictures that can be understood by anyone.

People who repay their loan on time are rewarded. These rewards are in the form of reduced interest rates and waiving off of EMIs that help lessen their debt burdens. The delivery of the loans is done digitally, making it easy for people from Tier III towns who find it difficult to approach banks.

These fintech entrepreneurs are helping create awareness on financial products and minimising r...

How is it different?

Fintech as a segment is fast growing. According to a report by Credit Suisse, the Next Billion is poised to increase credit usage from $25 billion in 2018 to $335 billion by 2025, a 13x growth.

Other app-based credit lending systems in India include MoneyTap and CreditLine. There also is Shubh Loans. Larger players like Capital Float and LendingKart are focused on SME lending. However, RevFin continues to target people in Tier II and III India.

“We have tied up with manufacturers of electric vehicles, who provide us access to customers through their dealerships like Saarthi, Mayuri, etc,” says Sameer, adding that the team has tied up with over nine manufacturers.

The fintech startup has grown loan approvals from Rs 13 lakh in November last year to Rs 40 lakh in March this year.

“Since April, we have been approving Rs 1 crore every month,” Sameer says.

The team says it has 100 percent loan repayments and collections.

RevFin claims to make revenue through processing fees and interest charged on loans. While the founder refused to share the percentage, he says that they have a month-on-month revenue growth of 30 percent. The team claims to make a revenue of Rs 5 lakh per month and says it will break even by the end of October.

According to a Statista report, the consumer lending market in India is expected to reach a total amount of $60.2 million by 2023. RevFin is still a growing project with competition from PSU banks, private banks, and private financiers.

But the founder is confident of continuing to scale, at speed.

The 12-member team is currently raising its pre-Series A round, and aims to close it by September.

He outlines even more ambitious plans for his startup.

Shubh Loans eyes the Next Billion, aims to be a lender to the financially underserved