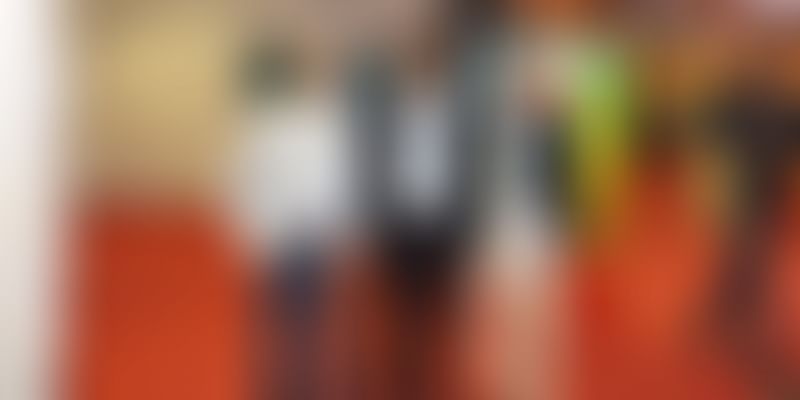 In a world where ‘Netflix n chill’ is the new normal, no surprises that people want more from their favourite OTT platforms. Reason enough for 48-year-old Nitin Narkhede and his wife to look for ‘First Day, First Show’ movies on these platforms.

This was also a time when Nitin, Vice President of Blockchain CoE, was exploring different areas where blockchain could make an impact. And that led to the birth of myNK - a blockchain-powered, global entertainment video-on-demand (VOD) platform.

The idea came to Nitin when he realised that the bottleneck was one: the movie right-holders’ constraints to deliver such options to the consumers at home in a safe, transparent, and justified way.

“The only option that exists today for them is a theatrical release to make their film a box-office success. I thought blockchain could solve this problem from the technology perspective, but it would still require a business sponsor to bring this to reality,” Nitin says.

He then discussed the idea with Indian film director Anurag Kashyap, who also turned mentor.

“We designed myNK, a blockchain-powered VoD (BVOD) platform that delivers directly to consumers in the most secure and transparent form on a pay-per-view basis at a cost,” Nitin says.

The first version of myNK enables global right-holders to experiment with such possibilities in India for the first time. The idea may have been generated based on Indian content, but it found its initial applicability by bringing global content to India.

The team found a way to bring globally appreciated, noteworthy films with gripping storylines to India in the most cost-effective manner for both, consumers and right-holders.

“Our colleague, Ranjan Singh, who worked with Anurag and is an executive producer for many films, coined the new name for the offering – myNK (my network), because it enables consumers to not only watch these films but also helps them promote on their network. myNK is a network of similar-minded people who discuss their passion for global cinema,” Nitin says.

He roped in a friend, Deepak Jayaram, who spent 14 years at Dialect Group, Groupm as Managing Partner, as Co-founder.

Anurag Kashyap, speaking of his association with myNK, says, “As a cinephile, there was always so much cinema when I was travelling across the world. I would watch the films and not find them back home. India has a huge audience for art house cinema, foreign language cinema. That’s why myNK. Through this unique platform, we are trying to bring to India a whole lot of world entertainment content, both cinema and series.”

Netflix, Amazon Prime, Hotstar, Zee5 – which streaming giant will stand out, and how?

The platform comprises a curated library, which currently has over 200 films and growing - most of these have never been released in India. The content includes critically acclaimed and award-winning films and series from across prestigious festivals, including Cannes, Tribeca, Sundance, and Berlinale.

However, the problem lies in disrupting the age-old processes of film distribution.

Nitin explains there has to be a significant shift and huge benefits associated with this transition. Adoption of blockchain as a technology enables new services, eliminates capital inefficiencies, and provides a scalable model in a very secure and transparent way.

The other challenge was to find adoption and buy-in of this new approach and the concept by the film industry. Currently, the process is tightly controlled by a few stakeholders with limited acceptance of innovation.

“What worked in our favour was to have a film director like Anurag Kashyap on board. In his role, Anurag helps us with design and strategies to approach this systematically,” Nitin says.

Most OTT/entertainment platforms today offer a one-way entertainment delivery algorithm. This, Nitin explains, gives limited scope to creators and consumers to choose. MyNK’s focus is to monetise the digital wave by bringing more consumers on the platform.

The model is built on trust and transparency, which is enforced by blockchain, mentoring and content curation by industry experts, and the pay-per-view option.

Nitin adds that the focus on community empowerment and involvement enables members and fans to contribute and expand the economy.

The platform also provides in-built spot incentives and rewards mechanism for any contribution to the ecosystem to enable micro-distribution.

Will India start paying for using platforms like Netflix, Hotstar, and Amazon Prime Video this ...

The platform uses blockchain to develop new features, service lines, avenues of earnings and revenue streams, and also a safer way of interfacing with unknown participants in the ecosystem.

Nitin explains blockchain has two important functions: hashing and time stamp. Hashing, a mathematical formula, assigns a unique ID to content; the right-holder can preserve this for his copyrighted content. Timestamping, on the other hand, assigns a unique timestamp to every transaction executed on the network, whether it is content viewing, buy/sell, and rate/review.

This ensures security, transaction level transparency, enablement of new services within the network, micropayments, and even micro distribution.

“A new business model emerges because the tech used is blockchain. For the first time, the blockchain technology will enable a creator to control his work entirely (rights management), and give him/her the autonomy to tokenise his/her creations and see through every transaction that is being done in the ecosystem and related analytics in real time (arrest revenue leakages). The tech also ensures the underlying security of the film,” Nitin explains.

Similarly, consumers also have a bigger role to play rather than just consume content in isolation.

Nitin says the consumers act as a community who will be collectively responsible for unbiased reviewing, rating, distributing, recommending and curating content, making the marketplace more connected, holistic, and intelligent.

Revenues and the market

MyNK charges $1 for every movie or episode that a person views on the platform. The platform works on the pay-per-view model and makes money on the margins on every transaction. The team, which refused to share the margins, is also looking to charge for other services, the team currently is working on.

Currently seed funded, the team is in discussions for pre-Series A funding with a few potential investors, mainly to focus on marketing initiatives and drive growth.

Today, almost every production house has an OTT platform, including Eros, Shemaroo, and Zee. These don’t include standalone platforms such as Netflix, Amazon Prime, and Hotstar.

But do we need more? Nitin explains myNK is more than an OTT platform since it works as a gateway for global film distributors and filmmakers to get discovered in unexplored regions like India.

The basic idea behind this is to set up a supply chain involving distributors or filmmakers, and all other stakeholders in the film distribution value chain. This solves the capital inefficiency problem that exists and enables zero-cost distribution for right-holders in a transparent pay-per-view model.

Speaking of their future plans, Nitin says, “The market will grow 10x by 2023 and I believe that there’s a lot of room for innovation and niche players to build services. myNK is trying to break into this space by offering niche content, a new business model, and new services built on top of a pioneering model.”

He says their defining model on B2B should enable multiple new services for the stakeholders in the near future.