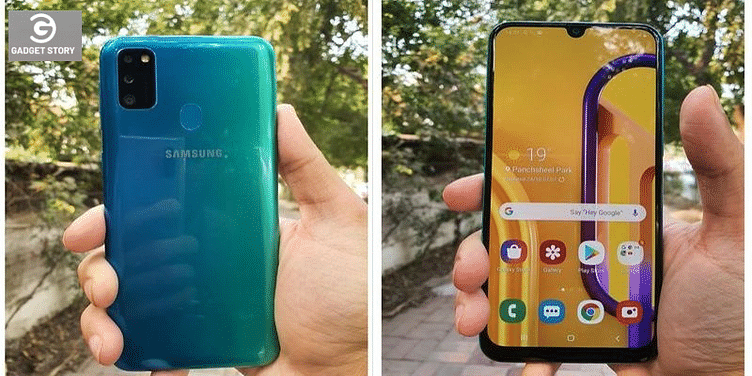 If uninterrupted, long usage is your main consideration while buying a smartphone, then the Samsung Galaxy M30s is your best bet, with its pioneering 6,000 mAh battery. But it falls short in the camera department. Read our review to find out more.

Over the last few months, the sub-Rs 20,000 smartphone segment has been dominated by companies focusing on cameras. But some manufacturers like Samsung are trying to improve battery life too.

After all, what is the use of a feature-rich phone if it cannot last even a day?

The Samsung Galaxy M30s contains a first-of-its-kind 6,000 mAh battery, and is supported by 15W fast charging.

It sports a 6.4-inch Full HD+ AMOLED Infinity-U display and is powered by Samsung’s own Exynos 9611 octa-core processor. The device runs Samsung’s One UI based on Android 9.0 Pie out of the box. It also has a USB Type-C port.

There is a triple rear-camera setup (48-megapixel primary sensor, 5-megapixel depth sensor, and an 8-megapixel ultra-wide lens with a 123-degree field of view). On the front is a 16-megapixel selfie shooter.

On paper, these are impressive specifications for a mid-range smartphone. Let’s see how it fared under practical circumstances.

At just 188 grams, the M30s is sleek and easy to hold despite the massive 6,000 mAh battery inside. The back of the phone has a glossy plastic panel and is surprisingly resistant to smudges and scratches. The rear panel also houses the fingerprint scanner that works just like any other device in the market.

The display is in this price range. The sunlight visibility, viewing angles, touch performance, and brightness levels are satisfactory. But Samsung displays are always oversaturated, which may not please every eye.

Performance-wise, the M30s leaves a lot to be desired. It struggled under heavy usage and multitasking (gaming, YouTube videos, photography). The good part though is that the phone hardly heats even after long usage.

It’s disappointing that the smartphone doesn’t run Android 10 (the latest version) but in its price point, most devices are offering Android 9 Pie.

Samsung’s One UI skin is far better than that offered by its Chinese counterparts. But there is room for improvement. The icons could get a modern touch, and the in-built gestures could be smoothened.

With medium-to-heavy usage, the M30s comfortably runs for 36 hours on a single charge. Sometimes, it could even carry over to the second day.

With heavy-to-very-heavy usage, the battery lasts a day. But, if you play YouTube videos on loop, the charge lasts for 16 hours only. Like the M30 - its predecessor with a 5,000 mAh battery - the USP of M30s is excellent battery life. You needn’t worry about a charger or power bank while stepping out.

Unlike the flagship devices in the market, however, the M30s takes 2.5 hours to go from zero to 100 percent. This, despite the 15W fast charger.

Camera: not quite there

Samsung has made a huge improvement from the 13-megapixel sensor on the M30. Even then, results on the M30s aren’t very promising.

Even though Samsung had stressed upon the smartphone’s low-light shooting capabilities at the launch, during our testing period, the photos came out blurry and lacked detail. This can surely be improved with a software update. The wide angle does a fairly good job though.

But when you compare the M30s with competition like Xiaomi’s Mi A3 and Redmi Note 7/8 Pro, and Realme 5 Pro, you realise the difference in camera quality. Even the Nokia 8.1, which is similarly priced, knocks the M30s out of the park in the camera department.

At a starting price point of Rs 13,999, the M30s is worth a buy for its stellar battery life and gorgeous Full HD+ display.

It is one of Samsung’s best mid-range phones, but may not be the top device in the segment it competes in.

The downsides of the device are the processor - which isn’t fully equipped for multitasking - the glossy plastic finish that makes it look less premium than competitor devices, and, of course, the below-average camera.

If battery life is your number one priority, then look no further than the Galaxy M30s. But, if you’re a heavy user and a compulsive photographer, there are more compelling alternatives in the Redmi Note 7/8, Realme 5 Pro/Realme XT, and even the Nokia 8.1.