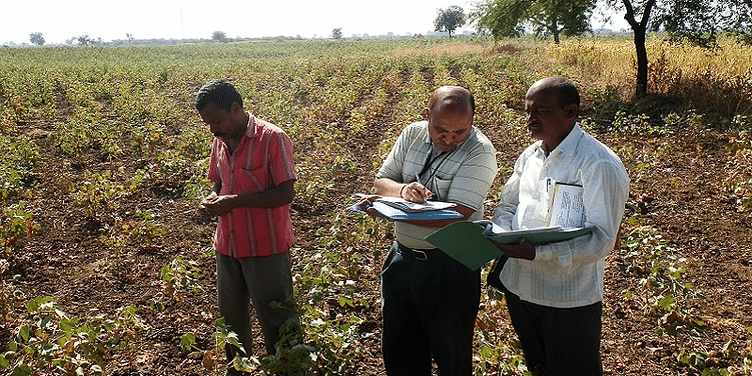 As 48 percent Agritech CEOs believe to have the next agritech unicorn in the coming three years, SourceTrace and its CEO Venkat Maroju are heralding the growth of the industry with solutions that get to the heart of agricultural problems across the globe.

For Venkat Maroju, growing up in the hinterlands of Karimnagar in Telangana made him witness and understand farmers at close quarters. Something that has always been on his mind. When the engineer saw an opportunity to make a difference in the lives of smallholder farmers, he was only happy to help.

Today, as the CEO of SourceTrace, a digital agritech platform that helps capture information regarding agriculture, financial services and retail through existing mobile and wireless data networks in developing economies (even in the most remote areas), Venkat is following his heart, and he is changing the lives of farmers with agritech.

Venkat says, "The company had minimised deforestation and child labour, and increased the incomes of 230,000 small cocoa farmers in West Africa who supplied to Cargill. In a case study, the Central Bank of Nigeria (CBN) used the SourceTrace platform to disburse agricultural loans to rice and maize farmers at scale."

Without digital technology, the bank was unable to scale due to a lack of trust in the loan disbursal process, and uncertainty while reaching out to the right farmers.

From the hinterland to progress

Venkat’s humble rural background has only made him more determined. His lack of English communication skills could have been a deterrent as he recalls that when he joined college, he could not speak a sentence in English.

Also weighed down by the tag of being from a backward section in the society, Venkat reveals,

"I went to government schools and studied in Telugu medium until 12th grade. In those days, when it rained, classes were cancelled, so I was surprised when I got into Osmania University Engineering College through a state-wide common entrance exam. Anyway, with a bit of luck and affirmative action, I made it," says Venkat.

In 2009, the engineer quit his job at Bose Corporation as the divisional CIO, and returned to Karimnagar to start the for-profit seed multiplication company Factum Ventures. After three-and-half years, faced with numerous challenges, and little success, he joined SourceTrace as CEO.

US-based SourceTrace was started in 2007. It was initially in the financial inclusion space, where it focused on branchless banking and agent banking. Venkat Maroju was then an advisor to Gray Ghost Ventures, an impact investment firm that had invested in SourceTrace.

In late 2012, SourceTrace found itself in limbo, with investors clueless about what to do next. Venkat was asked to help strategise during the period. He suggested focusing on agriculture instead of financial services. The board then asked Venkat to take over the reins of the company.

SourceTrace then underwent major management changes in 2013. Venkat Maroju took over as a turnaround CEO, and focused on digital agriculture. The new objectives centered around sustainable agriculture, and the development team created a software-powered digital platform that would bring predictability, transparency, equitability and sustainability to the agricultural value chain - from farm-to-fork.

The idea was to digitise the entire agricultural value chain by creating capabilities to capture information from remote and scattered locations, to provide real-time analytics. It also brought in complete visibility of the supply chain, and enabled a plethora of solutions like farm management, farmer-advisory services, traceability, certification, supply chain management, monitoring and evaluation, market linkage and financial services.

"When we started digital agriculture in 2013, there were only a handful of providers working in this domain. However, in the past three to four years, agritech has attracted many new entrepreneurs and we now have decent competition working on digital agriculture," Venkat adds.

The solutions by SourceTrace claim to increase farm productivity, farmer income, and enhance their livelihoods. It also alerts farmers on weather, market pricing, pests and diseases, and helps them conserve resources like water, fertilisers and pesticides.

Financial services like crop insurance and crop loans are also provided with the digital platform that has farmers’ data integrated with financial institutions.

The model and the market

SourceTrace now functions on a SaaS-based model. The pricing includes a one-time on-boarding cost, followed by a monthly subscription which is dependent on the number of farmers. For a few cases, the pricing is based on the number of acres under management. The company is now present in 27 countries over three continents, impacting a million farmers.

"SourceTrace has now reached profitability and decent scale, while doubling the number of farmers and revenue as of 2018," Venkat reveals.

SourceTrace is now active in Asia, Africa, South America, and has offices in USA, India, Costa Rica and Bangladesh, where its technology team and professionals of sustainable agriculture work together.

Reported to have customer retention at 95 percent, one of the best in the industry, the company claims to have been acquiring users, using its competitors’ solutions and benchmarking its products.

"Our solutions are being used to manage over 120 crops. We are targeting a footprint of 10 million farmers in the next three years," says Venkat.

According to a NASSCOM report, India currently hosts more than 450 startups in the agritech sector, growing at a rate of 25 percent year-on-year. It is estimated that by 2020, the agritech sector will be at the centre-stage of innovation and lead India’s journey towards overall transformation.

With players like Oxen Farm Solutions, Agribolo, Gold Farm, Trringo, farMart, and Agri10x, the sector has received more than $248 million in funding as of June 2019, showing a growth of 300 percent as compared to the previous year. With the recent rise in funding, 48 percent of agritech CEOs believe to have the next Agritech unicorn in the coming three years.

This agritech startup founded by IIT Delhi alumnus is serving over 55,000 farmers in Bihar, Utt...