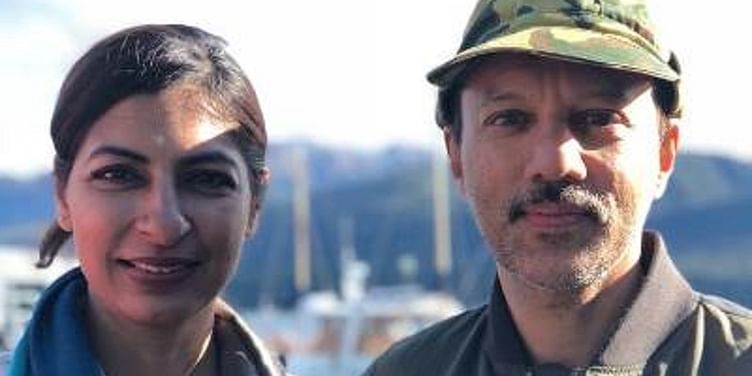 Adarsh and Shalini Jalan started NeoFoods in 2005. They sell products to chains across the world, and have connected 10,000 farmers to more than 2,000 Indian retailers, and thousands of retailers across the world

When you enter Cunningham Road in Bengaluru, you will find a mix of old stone buildings and modern architecture. Nestled in this maze is Neo Foods, a food company that sells its products online and in leading supermarkets, and has also gone global with several renowned billion-dollar retailers.

In fact, it went global first and then came back to India, a rarity even in the tech industry. This multi-crore company was built by Adarsh Jalan riding on 15 years of work put in with farmers to take their produce global. The entrepreneur now harbours plans to make Neo Foods the biggest food brand in India.

In the early-2000s, Adarsh came down to Bengaluru from Kolkata to become an entrepreneur. At the time, software services was all the rage, and he started a company. But in five years, he was done with the industry. During his travels locally, around Bengaluru and other southern regions, he realised that some global companies were buying gherkins from farmers.

Adarsh comes from a business family that has dipped its toes in different sectors, including textile, machinery, tea plantations, and engineering equipment, but nothing in the food scene.

“Gherkins were mainly an export product with limited market in India and there was a high risk involved,” Adarsh explains. But he was determined to give it a shot, and started Neo Foods in 2005.

“Karnataka’s climate and soil is ideal for gherkin cultivation, thus motivating me further to set up my business in the processed food sector,’’ he says.

To build Neo Foods, Adarsh brought to good use his family’s learnings from its tea business. Although the agricultural models are different, there were plenty of lessons. From inception he decided that we would work directly with farmers through the contract farming model because he wanted to build an ecosystem based on mutual benefit and support.

Neo Foods, therefore, began to provide farmers with the expertise and technical know-how as well as materials such as seeds, fertilisers, and pesticides. “I hired professionals from the field and invested in developing relationship with the farmers. Neo Foods has now helped farmers in good and bad times, and today is a well-known brand within the farming community,’’ Adarsh says.

The company was bootstrapped with Rs 1 crore. While Neo Foods started buying from 500 farmers in early-2005, it is currently working with over 10,000 farmers. The company covers more than 6,000 acres of farms.

In 2005, Neo Foods built a state-of-the-art manufacturing facility in Tumkur, Karnataka, equipped with the necessary machinery to clean, process, and pack farm produce.

The company has been growing steadily with significant jumps in between. Today, Adarsh says it is one of the largest companies for packaged farm produce. Its first product was gherkins, followed by jalapenos in 2006.

Adarsh says Neo Foods started as a 100 percent export-based company, and its first market was Russia. He set up the required systems for exports, employed industry professionals, and obtained the necessary quality certifications. Once the export market settled to a steady Rs 50 crore, Neo Foods began to target the Indian market from 2014.

Today, it sells to all leading retailers in Germany, the UK, France, the US, Canada, and Australia, and has a strong local presence too. The Indian business is controlled and managed by Adarsh’s wife, Shalini Jalan.

The entrepreneur explains that, over the years, the firm has expanded from being just a pickled vegetable company to a food one. Neo Foods’ product range includes baby corn, capsicum, red paprika, canned fruits, relishes, and pastes.

The company is present in close to 50 cities and more than 2,000 stores across the country. Recently, Neo Foods completed the construction of its third unit - two are for exports and one for the Indian market.

Mithai for Millennials: Meet the 27-year-old CEO who transformed a traditional 30-year-old mith...

However, the journey was not free of struggles. Adarsh had to understand what it meant to get the right quantity and quality of crop, and setting up systems and logistics to handle large volumes. In the early days, the Russian market was fairly easy to enter but selling to premium retailers in the UK, Germany, and the US was a challenge initially.

“We invested in sales and marketing by visiting retailers and customers regularly and participating in large food exhibitions in the US, Europe, and India. This was backed by investment in state-of-the-art factories and quality systems. During the first phase of growth in India, we signed contracts with large multinational fast food chains such as Pizza Hut, Domino’s, McDonald’s, and Burger King,’’ says Adarsh.

For Adarsh it was also hard to crack deals with food chains as his company was new in the domestic market. Concerted efforts to educate his prospective clients helped him convey the message that Neo Foods is an Indian brand that went global first and came to India in 2014.

“By selling to these institutions and retailers, we realised the importance of localising the products as per the taste of the Indian customers,” Adarsh notes.

The company also follows sustainable agricultural practices and USFDA and European Union Food safety norms for pesticides management in farm practices. It has a traceability system for all its crops. “Our primary USP is highest quality,’’ says Adarsh.

Its plant has been approved by TESCO, the global retailer, for its own private label production, and is certified for BRC issue 7 and IFS 6 Global standards by SGS. Market opportunity for Neo is huge for existing products as well as products that it plans to launch soon, both internationally as well as domestically. Exports form 88 percent of the company’s total sales at present. The biggest market for gherkins and jalapenos is in the US, and that’s where the opportunity lies.

Adarsh says the recent growth rate in India has been good too, since the Indian customer is now looking for safe and good quality products provided at a reasonable price.

“There is an increasing demand for convenience and ready-to-use products, and soon we are launching such products to meet the rising needs of the domestic customer. We will provide a range of products that can be utilised in multiple cuisines,’’ says Adarsh.

Over the next two years, Neo Foods’ strategy is to sell larger volumes of its traditional products. Its clients are primarily leading retail chains across the world that work directly with the company. In some countries, Neo Foods partners with leading local food importers and distributors. In India, its clients include numerous multinational QSRs and its products line the shelves of Nature’s Basket, Foodhall, and Spencers. Its 200-member team is now preparing to consolidate the Indian market further.

The competition is a distant second when it comes to exports. Some of the smaller companies that compete with Neo Foods include Sumeru, Riviana, and Trikaya.

Building a brand takes time but Adarsh shows it is possible to scale up with bootstrapped capital. To entrepreneurs looking to take a similar path, Adarsh has this to say:

“Be prepared to work hard, travel, and get your hands dirty. Invest time and effort in building relationships, understanding your market and most of all be ready to challenge yourself – personally as well as professionally. Manufacturing is the backbone of any economy, and if you are successful, it can give exceptional returns.”

FuelBuddy raises $20M in a round led by Jindal Power