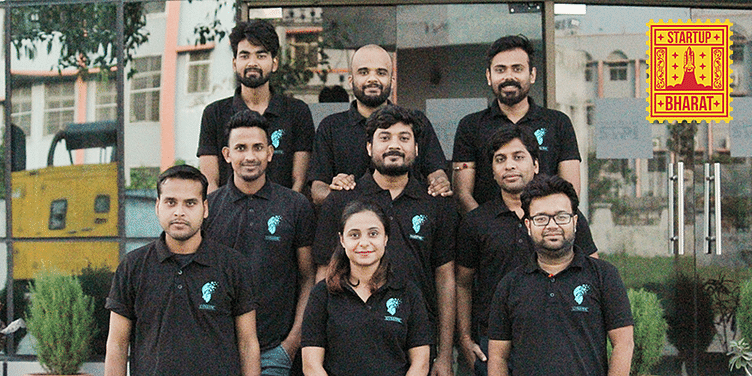 Launched in 2017, Cymatic is tapping technology to provide interactive virtual classrooms and peer learning to students of Class 8 to 12 in Tier II and III villages. The edtech startup works on a subscription model and aims to go pan-India soon.

Kaushik Sharaf, a BTech (Electronics and Communications) student of BIT Mesra, was always inclined towards entrepreneurship. In his first year at college, he started selling self-designed T-shirts. Soon after, he created a healthtech database to enable real-time data flow of the human body.

"I was only in the second year of college, and failed even before my idea got shape. But I learned how to fail successfully," he says.

He participated in competitions and also managed a few freelance projects in between classes. In his final year, Kaushik received a pre-placement offer from Uber in Jaipur. After working in Jaipur for seven months, he returned to Bihar to work as a contract-based consultant. “Everyone thought it was madness,” he recalls.

Still enthusiastic about taking the entrepreneurial plunge, Kaushik started meeting a few people keen to start up. Going against popular belief that it was a bad idea to start an edtech company in Bihar, Kaushik incorporated Cymatic in January 2017. Its objective is to improve learning, and it offers interactive virtual classrooms and peer learning using synchronisation.

The startup has also partnered with Prakash Academy, an organisation aimed at providing quality education to the underprivileged, to provide online classroom education to students of Classes 8 to 12, in Tier II and III cities of India.

Kaushik says Cymatic came from his own experience. “I have been a below-average student and always wondered if I could do better by spending more time with my teachers,” he recalls.

he founded Cymatic as a social impact startup to help students residing in villages of Bihar's Gopalganj district. In partnership with Prakash Academy, Cymatic would hire people for a one-year fellowship programme to teach students in rural India. "We observed a high downfall in fellowship. Teachers started leaving in the middle; sometimes, even in the first few days of the programme," Kaushik says.

The reason was easy to predict: while everyone wanted to contribute, nobody was ready to adjust with the living standards in the villages.

“It is then that I realised that while I cannot change the village entirely, I could change the method of delivering quality education in village classrooms,” he says.

Kaushik came to Bengaluru to be mentored by The Nudge Foundation. He interacted with Atul Satija and Naveen Tewari, Founder of inMobi, who advised him to monetise the idea. Thus, in September 2017, Cymatic pivoted its model to combine technology and education, and deliver lessons through live virtual classes.

It acquired its initial customers through referrals and live demo at the student's home. “We are still in search of better ways to reach out to customers to scale rapidly,” Kaushik says.

The live video sessions on Cymatic's website help students learn chapters from subject experts. With the quizzes, students can test their understanding of concepts.

“Based on their performance, a learning curve is mapped through an adaptive tool, which further provides personalised learning recommendations,” Kaushik says.

The adaptive tool also refers students to other small groups of students to discuss their doubts, and has experts participating in real-time doubt solving. Students get access to clarify doubts round the clock.

“Parents get to see what and how a subject is being taught to their children. They also get to meet experts during online parent-teacher meetings," Kaushik says.

Quality education for all

Cymatic operates on a subscription model. It offers subject-wise and class-wise courses. Currently, it offers 20 different courses, ranging between Rs 10,000 and Rs 50,000, annually. The payment can either be made in a single transaction or in instalments.

Since Cymatic is targeting the K-12 segment, it is very difficult for the startup to convince and convert a student into a paying customer.

"We are actively collaborating with local people to set up admission centres at rural and semi-urban locations, where registration and demos could be delivered to interested students and parents," Kaushik says.

After a lot of trial-and-error, Cymatic is now the only edtech company in the state to be recognised by the government of India, and Bihar and Jharkhand. It operates out of the Software Technology Park of India in Patna, and has also received seed funding from the Bihar government, and a few angel investors. Cymatic has also received a Hardware Grant from Learning Equality, US.

The startup presently has more than 700 registered users - most from Bihar and Jharkhand, and a few from Mumbai and Delhi. According to Kaushik, Cymatic aims to reach 2,000-plus paid users by the first quarter of 2020. It is looking to increase the daily engagement per user from 90 minutes to 110 minutes.

With the growing internet base and number of smartphone users, the online edtech market has been growing tremendously. According to a report by KPMG and Google, India's online education market is set to grow to $ 1.96 billion, with 9.6 million users, by 2021.

While there are players like new unicorn Byju's, Vedantu, Toppr, and Unacademy, Cymatic differentiates itself from its competitors with its offerings, quality, and post-class support.

"Cymatic is tailoring offerings according to the needs and choices of the students. We have no fixed formula of one-size-fits-all," Kaushik says.

Cymatic is currently working with the Bihar government to launch online classroom programmes in villages of the state. It is also developing an app that meets the needs of the government, and aims to target the Delhi-NCR market for the next academic session.

Cymatic is also launching regular e-classroom programmes for other boards, including ICSE, Bihar, and Jharkhand Boards, from the next academic year in 2020.

"We will also be launching several short-course programmes, based on the difficulty levels of chapters. In June 2020, we will launch a series of All India CBSE Board mock tests for Classes 10 and 12," says Kaushik, adding that he is looking to raise funds for geographical expansion and to add more features to the platform.

This IIT graduate turned police officer turned entrepreneur is now on a mission to help small-t...

[Startup Bharat] This 16-year-old boy from Surat has developed an edtech platform for ‘Gujju St...