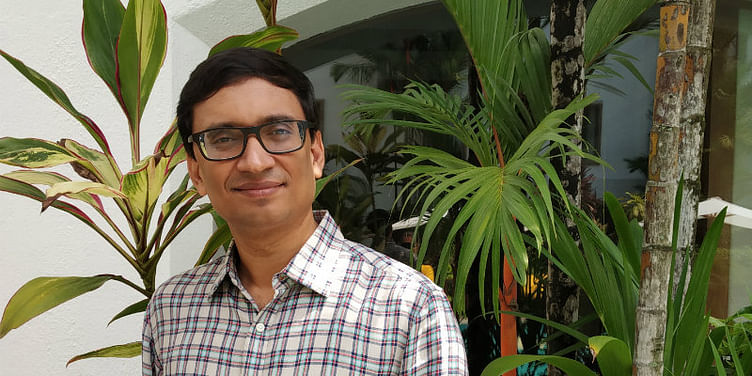 This former Police Commissioner, with his edtech startup ConceptOwl, wants to prepare students from Tier II and Tier III cities for entrance exams without having to go to Kota and Hyderabad.

Rajan Singh graduated from IIT-Kanpur, went on to serve in the police force and today runs edtech startup ConceptOwl.

If that is not an impressive list of achievements, we are not sure what is! Rajan was with the Indian Police Service for eight years and served as the Police Commissioner of Thiruvananthapuram for three of those, managing a force of 3,500 policemen. However, the urge to tread a different path soon led him to the corporate world. "After having served half my tenure as a Commissioner Police, I got bored and decided to leave," says Rajan.

He went on to study at Wharton School, University of Pennsylvania and joined McKinsey & Company as a consultant. From there, he moved on to New Silk Route Private Equity where he focused on growth stage companies in Asia.

But Rajan always wanted to be an entrepreneur and start his own company.

"As an investor, I used to meet a lot of entrepreneurs. I saw that the only thing which made them different from us professionals was the ability to take risks. I did not want to regret not taking a chance in life. I quit my job and took the risk of becoming an entrepreneur," he says.

In 2012, he began his entrepreneurial journey with edtech company CourseBrew, but his "passion was science and at CourseBrew, the learning was not science-specific," so he quit. In 2o16, he started ConceptOwl - a teacherless online-in-classroom educational platform to help students prepare for entrance exams.

"Students in these areas lack quality coaching and lakhs are forced to migrate to cities like Kota or Hyderabad," he says.

The platform, with a website and application, tied-up with Kota's Bansal Classes for tests and practice.

In 2017, Rajan, along with Bansal Classes, started classroom teaching for students of standard 9 to 12, offering Maths and Science coaching in an independent center.

tied up with schools and began classroom programmes. However, he soon had to start teaching Physics himself as the company was unable to retain good teachers, as they shifted to Tier I cities for better opportunities.

"While teaching, I realised that students' attention levels and engagement would shoot up whenever we gave them problems to solve," he says. Thus, in early 2018, team ConceptOwl started creating videos, aiming to recreate a live-class experience along with problem-solving activities.

Currently, ConceptOwl's coaching programmes are available at Rs 20,000 per year, for classes 7 to 10 and at Rs 30,000 for classes 11th and 12th, and are a combination of online and offline education.

How did the name come about?

Rajan says, "'Concept' links back to our goal of bringing back focus to concepts instead of just cramming. Also, my daughter is a Harry Potter fan and I found Hedwig cute. Not only that but owls generally symbolise wisdom."

In a ConceptOwl class, the teacher is replaced by a facilitator or Classroom Manager, who manages the teaching as per the script. "A pre-recorded video allows effective structuring and scripting for the teaching process," says the founder.

A facilitator is a Science graduate who can engage with students, enforce discipline and manage the class. They show videos on a smart television screen or projector, ask questions and collect doubts from the students. In case of a doubt, if the facilitator is unable to solve the problem, he forwards it to a team of instructors, also called the 'real-time remote instructors.'

These instructors either send responses or shoot a video to be shared with the class. With six instructors as part of the team, ConceptOwl also has five instructors working on an hourly-basis.

"Instructors are usually experts in the domain and besides having their concepts clear, they are able to solve problems and elucidate the concepts to the students," says Rajan.

Homework, assignments and tests are given online, and all students enrolled in the startup’s courses are required to have an Android device with internet support.

While it currently operates as an after-school programme, ConceptOwl will soon start a franchise programme where a franchisee does not have to spend anything on instructor salary as the company will provide scripted videos themselves.

What started as a team of five, consists of 25 people now.

"We are all from small towns and can attest to the problem (of the lack of good coaching centres) first-hand," says Rajan.

Nisha Salim, who manages Product and Operations, was the first hire for ConceptOwl. Before that, she was running her own copywriting business. One of the other core members, Jayadevan, has a teaching experience of 30 years.

While there are several prominent players in the edtech market like Byju’s, Khan Academy, Notesgen, AlmaMapper and Stuvia, ConceptOwl’s model - combining aspects of traditional offline and modern online learning - sets it apart.

"While there are plenty of online players, parents still prefer sending their children to physical coaching centers," says Rajan.

The company claims to have a revenue of Rs 2 crore and says it is almost breaking even. He adds that ConceptOwl is poised to grow 10 fold in the next year.

It has raised Rs 3.5 crore since its inception, and its principal investor is SunTec Business Solution.

Rajan has tested the business model in two locations and is now rolling out the programme in 15 schools with 700 students in the districts of Thiruvananthapuram, Kollam and Alleppey. His goal is to reach 100 locations in the next 12 months, primarily in South Indian states of Kerala, Tamil Nadu, Karnataka, and some parts of Andhra Pradesh as well as North East India.

The ConceptOwl team is also building programmes in Hindi and other regional languages to reach out to millions of Tier II and Tier III students and provide them with the same quality learning as found in metro cities.