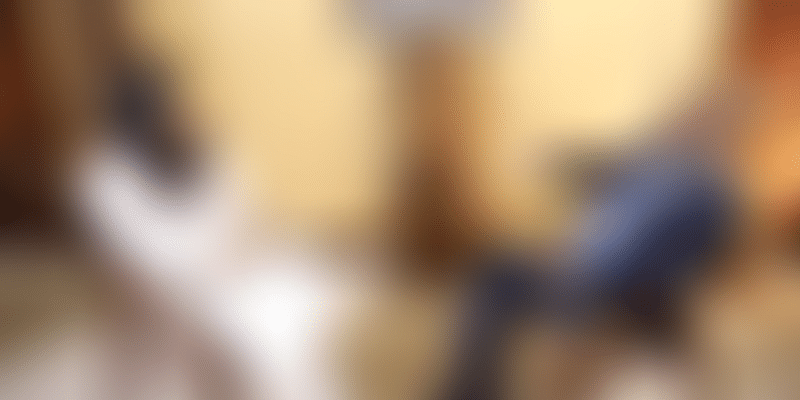 In an exclusive interaction with YourStory, SBI Chairman Rajnish Kumar gets candid about his personal journey from a probationary officer at an SBI branch in UP in 1980 to his ascension to the top job at India's largest lender.

Many of us, Indians, have grown up with our own stories of the myriad ways in which the State Bank of India (SBI) has enabled our success – a business loan here, a student loan there, or a comprehensive retirement plan are just a few examples. I personally recall how my late mother had taken an education loan from an SBI branch in Patna so I could pursue my Master’s Degree in Business.

Which is why, for me, meeting and getting the opportunity to interview SBI Chairman Rajnish Kumar felt very personal and, in many ways, representative of the new India that we have all been talking so much about. An India that is not defined by class or creed or status, but real transformation that is powered by the strength of every citizen and driven by innovation, creativity, and hard work.

Indeed, the name SBI has always been synonymous with trust for a large majority of aspirational Indians. In fact, for an entire generation of Indians, SBI has been the only preferred banking partner, and now, the banking behemoth is on the path to taking along the younger, newer generation of Indians in its journey into the new, digital era and its transformation to stay nimble and innovative for its large and growing customer base of over 430 million.

Rajnish Kumar’s own journey at SBI – one that began exactly 39 years ago – bears all the hallmarks of these very traits that we envision driving new India. His consistency, hard work, perseverance, humility, and an unwavering, robust personal value system, and an inclusive, decisive leadership style have enabled his ascent to one of India’s most well-respected bankers.

From a Probationary Officer (PO) at an SBI branch in a little-known town in Uttar Pradesh in 1980, Rajnish has since made the journey to becoming the Chairman of SBI, steering India’s largest lender into the new digital era.

Ascent to the top

Reminiscing about his early days in SBI and his first assignment as a PO at Auraiya Tehsil in UP, Rajnish tells me rather good naturedly that having a passion and natural affinity for one’s job have, perhaps, been the most important reasons for his steady ascension to key roles at various SBI branches across the world, and eventually to the top job at the bank.

“In any field, the first requirement is that you should like your job. If you keep on cribbing about it or your heart is not there, then it is very difficult (to make that journey to the top). Second is, that I had never said no to anything that came my way. Never have I complained that I don't like a particular position or a centre. So, whether it was a particular centre or assignment, I accepted everything willingly and happily. Third, is of course, the fact that temperamentally, I'm not someone who quarrels.”

And true enough, Rajnish never complained about his postings, starting with his first which he remembers more for an incident in which 20 upper-caste Thakurs were killed by Phoolan Devi in a village located around 20 km from the Auraiya branch, just over a month or two after he started his first assignment. Neither did he complain about many of his other interesting postings, including one in Pilibhit in UP at a time when terrorism-related incidents were at a peak.

“I was posted at Pilibhit and nobody wanted to go there. Many of my friends told me that they weren’t sure whether I will come back. But my attitude towards work and generally, what I also tell my people, has been that once something has been given to you, then there is no point in crying about it,” Rajnish says.

Armed with a Post Graduate degree in Physics from Meerut University, Rajnish tells me matter-of-factly that in the India of the 1980s, resources were scarce, as were jobs. Hence, one either became an IAS officer or a PO at SBI or any of the other banks.

“Everything was in short supply in the 1980s. It was a struggle for almost every family. Our family was also no exception. And for jobs, people were always looking; either you became an IAS officer or you became an SBI probationer or some other bank’s probationer. This was the lifestyle,” he tells me.

Rajnish’s story of ascension to the top boss at SBI is also reflective of the story of ‘aspirational India’, he tells me. “Basically, it is an aspirational India. Today, you're doing my story but your story is equally inspirational, so if you ask me, that is India's biggest story -- the (aspirations of the) young people, the demographics,” Rajnish says.

Revival of private sector investment will make us a $5 trillion economy by 2025: SBI Chairman R...

Speaking about the recent spate of initiatives implemented by the government to improve India's ease of doing business, Rajnish Kumar praised Prime Minister Narendra Modi for the many deep-rooted reforms he has launched and executed since assuming power in 2014.

Despite the obvious signs of a downturn in the country, the head of India’s largest commercial bank in terms of deposits, branches, customers, assets, and employees believes this is a natural outcome owing to the spate of growth reforms that have been implemented by the Modi government.

Fears over the Indian economy slipping into one of the worst slowdowns in decades has gripped the markets ever since the release of the GDP numbers for the April-June quarter showed growth slowed to a six-year low of 5 percent, compared to 5.8 percent in the previous quarter.

But Rajnish believes the Modi government's initiatives around improving the Ease of Doing Business in India have had a natural impact on growth, given the evolution from a traditionally informal form of economic and business environment to a more structured, well-regulated operating environment.

"Since our Prime Minister took charge in 2014, many deep-rooted reforms have been initiated which includes GST, Real Estate Regulation Act, Insolvency and Bankruptcy Code, and action against corrupt business practices. I think because everything has come in one go, we are seeing the impact (on the economy)," Rajnish says.

As such, "a little bit of patience" is required to see economic revival, adds Rajnish, who believes there is room for optimism, given the latest data points suggesting higher consumption growth during the festival season.

Still, a lot more work needs to be done around infrastructure development, both physical or digital, and in enabling a hassle-free operating environment for businesses in order to drive investment and growth in the country, Rajnish says.

“A lot of work has been done, and in many fields today, India has shown the way. For example, with our unique identity project, Aadhaar or with the technology stack which India has done or the launch of the unified payment interface (UPI) – these are the many developments where we are ahead of many other countries or even some advanced countries. So, what I would say is that the circumstances, the environment, everything (talent, language, innovation) is in our favour, and we just have to get it right this time and not miss the bus,” Rajnish adds.

Admittedly, not missing the bus is a key hallmark of Rajnish’s leadership.

At SBI, he has been driving a transformation strategy focusing mainly on five areas: customer service, corporate credit revamp, digitisation of banking operations, synergy between subsidiaries, and development of human resources.

Of these, the transformation plan around enhancing customer service at SBI’s 22,500 branches top the agenda, followed closely by the bank’s digitisation efforts and process enhancements leveraging technology, innovation, and partnerships with fintech startups.

These efforts have yielded clear results, with the bank boasting daily customer base growth of more than 80,000 accounts. “Our customer base is growing. But what happens is that for people like you, who are relatively younger, there are quite a few choices. So (we’re always exploring) how to attract you towards SBI. And that is where the agenda on transformation is around digitisation.”

YONO, or You Only Need One, is SBI’s biggest digital initiative, which the bank started working on about three years ago. YONO, which offers conventional mobile banking services such as bank account opening, fund transfers, cashless bill payments, and loans, was launched two years ago.

SBI's YONO initiative's central aim is to win the growing number of customers who prefer to bank online, rather than go to a physical branch, as is the preferred mode with SBI’s older generation customers. The smartphone app makes it possible to make ATM withdrawals without a card. It also offers services from over 60 ecommerce companies.

In addition to these efforts, as part of its transformation strategy, the bank is actively looking at investing in fintech startups – an area Rajnish admits has been wanting, even as SBI’s engagement with startups in terms of procurement and partnerships have been robust and long-standing.

The decisive, calculated risk taker – who is driving the transformation of SBI through tech-led innovation – believes collaboration and partnerships will be the way forward in effectively driving change at SBI.

He says, “I think the ideal situation is that we join hands (with startups). Anyone and everyone is welcome; you bring an idea and if we like the idea, as I said, either we are ready to procure or we're ready to partner or invest.”

In short, for any fintech startups or businesses that have innovative ideas or products in the banking space, there’s “no better place than the SBI to experiment,” concludes Rajnish with a flourish.

SBI Chairman Rajnish Kumar on how SBI is banking on digital transformation to strengthen its cu...