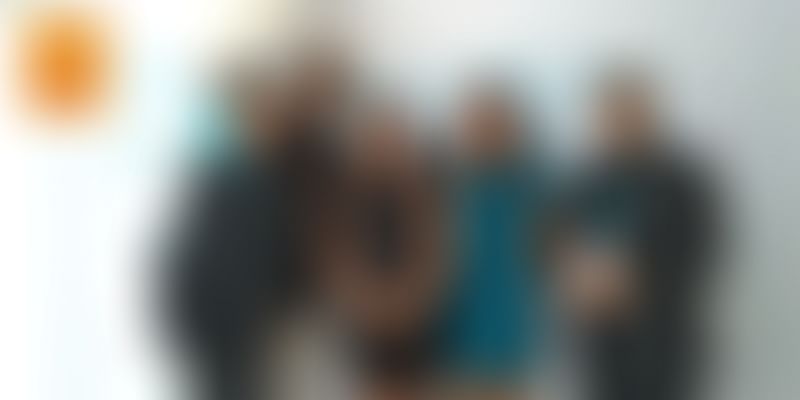 As India gears up for an era of increased digitisation, the banking sector is not far behind. Even the co-operative credit societies, which provide loans to members at reasonable rates, are fast turning to technology in a bid to stay relevant.

Kerala, which has a thriving startup ecosystem, also has a large population that is still dependent on these co-operatives for their banking and credit needs.

KRED is also the first Indian startup to have received investment from Barclays. It participated in the Barclays Accelerator held at Tel Aviv earlier this year, and raised $120,000 funding. It is also backed by Techstars.

Prior to starting up, Ricky and Nicky founded two startups - CommonTrip (an enterprise carpooling platform) and more recently Paysack, a mobile-wallet for enterprises. Paysack, which focuses on employee benefits and reimbursement, was built around the same time when competitors like Zeta and Niyo launched.

The brothers met Rajat at a sustainable transportation accelerator at Cork in Ireland when they pitched for Paysack. Rajat was then hired as the CTO. They also on-boarded Richmond, who was part of the core Paysack team.

“Paysack was mostly bootstrapped with a lean team and we had received small amount of funding from a handful of angel investors. Over a period, we transitioned Paysack from a single enterprise wallet and card to a banking as a service platform - The Paysack Connect API platform. It enabled fintech startups to build and launch products that require bank relations and integrations, accounts, cards, and other financial services. Through some services projects handled by a small dedicated team, Paysack has gone from a zero-revenue company to turn it around into a self-sustaining business,” says Ricky.

The six-member team is currently focused on building KRED to be the go-to cloud-native platform for financial institutions, and for newly-formed organisations like Nidhi Companies and some new NBFCs.

A former Google employee, Ricky (36) has a PhD in Computer Science from Maynooth University in Ireland. He was leading the Geo Data Operations team at Google before starting up. Besides PaySack, Ricky has also been the brain behind Odikyo (a real-time performance and location tracking platform for friends and families of runners).

Nicky (33) is an Electronics and Instrumentation Engineer, and is the COO at KRED. Rajat Talwar (32) is a BTech graduate, and is currently the CTO. Rajat has previously worked with Amazon.

Services under its umbrella

The startup has launched many platforms to ensure a hassle-free experience for its customers. The KRED Co-op platform includes an end-to-end solution that operates on a modern banking infrastructure. KRED Core Banking, KRED Neo-banking, and automation of accounting and book-keeping are all integrated with each other.

“We have built the technology in a modular fashion, thus having the ability to provide these independent products as standalone solutions, or even have API integration to their existing software solutions,” says Ricky.

The startup has also partnered with a Core Banking System (CBS) provider to integrate the KRED Digital Banking Infrastructure. It says it is also in talks with a few more. Through API integration, KRED says it is bringing the digital banking infrastructure, and is using the CBS vendors as a distribution channel.

With KRED, co-operatives can use its cloud-native core-banking system to run their daily operations. Every time a new member gets registered, KRED creates a database on its platform. Later, an actual digital bank account is generated in the background, which ensures the members get access to services including UPI, IMPS, BBPS, and ATM card among other services that any urban bank customer has access to.

KRED claims all this happens in a secured web-browser provided by the startup. For repayments, it automates the reconciliation in the background.

“Employees of co-operatives can now spend more time trying to service its users and understand their needs, as compared to wasting time on data entry and manual management of records,” says Ricky.

KRED works on a SaaS (software-as-a-service) model, where it charges per user, per month. With a flexible pricing strategy, it works with the co-operative to ensure a win-win situation. KRED also charges bank partners for transaction.

Apart from targeting banks and credit societies, KRED has also partnered with a few existing core banking system software vendors for distribution. While they are still early in their journey, KRED has been receiving interest from newly formed Nidhi companies.

The market and the future

According to Statista, digital payments is the largest segment in the Indian fintech market,  and its total transactional value is currently pegged at $64,787 million. It is expected to show an annual growth rate of 20.1 percent.

There are over 90,000 Corporate Credit Societies across India, serving over 120 million people. In fact, “almost $24 billion was disbursed as loan last year itself,” says Ricky.

While there are various CBS software vendors across the country, most of them are built with a cash-first approach. Kolkata-based Globsyn 3rd.Life has product NOTIVA Prime, a CBS System offering SWIFT System Integration with built-in-fraud-detection intelligence. There is also Bengaluru-based FinBit, New York-based BillGuard, and California-based Jumio.

However, Ricky feels KRED has a differentiator to offer.

“KRED brings value to what each of them (banks and CBS software vendors) bring. We provide banking and CBS in a cloud and mobile-native platform,” he says.

Going forward, KRED is looking to on-board partners who would align with their vision and be with them for a long term. “This sector needs to be served patiently. It is more about customer lifetime value than huge immediate revenue. Building a neo-bank for the co-operative members require long-term support and alignment,” Ricky says.