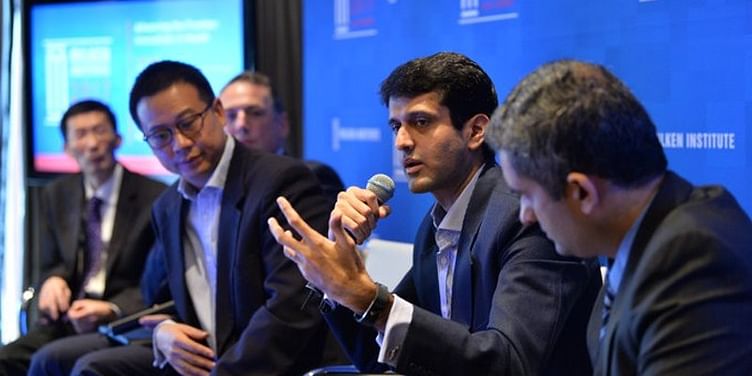 In a conversation with YourStory, Kabir Narang, Partner at B-Capital, the Silicon Valley-based fund founded by Facebook Co-founder Eduardo Saverin, talks about the recent investment in bike rental startup Bounce, plans for India, and what they look for in founders.

When Eduardo Saverin, Co-founder of Facebook, founded B-Capital along with Silicon Valley-based, Indian-origin investor Raj Ganguly, the duo roped in Kabir Narang as the Co-head, Global Investments, for India, the US, and Southeast Asia.

In 2017, B-Capital made its first close of close to $143.6 million, with a focus on investments in emerging markets.

Kabir, who has over 15 years of experience in private equity investments and management, has worked for Eight Roads Ventures, Warburg Pincus, McKinsey & Co, and Boston Consulting Group. The St Stephen's College, Delhi, graduate has an MBA degree from University of Oxford, and was an entrepreneur before becoming an investor.

While at college, he ran a small restaurant that gave him firsthand experience of the challenges of running a business, and led to empathy and admiration for founders scaling large businesses. That has been his driving force, and he has since then invested across sectors such as financial services, health, and transportation.

B-Capital has made over 20 investments in startups across Series B, C, and D stages with a quantum of $15 million to $50 million. The fund’s latest investment was in Bengaluru-based Bounce, where it participated in the startup’s Series D fund-raise of $105 million.

Kabir, who now is a part of Bounce’s board, in a conversation with YourStory, explains the fund’s investment thesis, what he looks for in founders, and why mobility remains a big focus area.

YourStory: What are the key areas and sectors of focus for B-Capital?

Kabir Narang: We are focused on large businesses in the tech space. Can we find founders who are addressing large market opportunities? And can we back companies that are market leaders, and find these market leaders? If you take Bounce as an example, it is really transforming last-mile mobility in India and that excites us. The company is doing over 120,000 to 130,000 rides in a day. Over 30 percent of its commuters are women, and it is enabling and creating a massive ecosystem and looking to transform the way people commute.

If you look at other startups like Ninjaman in Southeast Asia, and BlackBuck in India, the idea is to focus on exceptional founders who are building mission-driven companies and large sustainable businesses.

YS: With your investment in Bounce, and its valuation now touching $520 million, do you think there is space for another unicorn in mobility?

KN:  Mobility is a big space for us. We are investors in Bird as well. Commuters in urban areas are changing, but public infrastructure still requires a lot more enablement. A solution like Bounce has gone from zero to 120,000 rides in 13 months; it makes them one of the fastest mobility startups globally. So there is a large market opportunity. Also, they have a growing focus on electric vehicles. It is just the start of the journey, and there is large growth opportunity given where transportation is in India right now. We see the wave globally as well.

YS: What do you look for in founders while investing in their companies?

KN: I like founders who take a global-first view in large business. I look at global-first founders transforming industries. I also like looking at how partnerships with large corporates can affect early-stage companies and aid their growth. I believe the next wave of technology will be in partnering and how you work with others in the ecosystem to scale quicker.

When a company like Facebook was transforming the media and advertising industry, it was disrupting a space. Today, along with disruption, it is about how you work with an existing company in the space. We, at B-Capital, are working to build those synergies.

YS: With investments across the globe, do you see any similarities in the markets?

KN: With a portfolio of over 20 companies today, we see things that happen in the US and China, may happen in Southeast Asia. It not only helps make better investment decisions, and but also help founders in recognising the same. We look at different patterns, and what can be matched and worked with.

If we look at learnings that we bring in from different markets, let’s talk about tech companies in Israel. Year after year, VC-backed companies were delivering exits of $4 to $6 billion. It wasn’t about one big exit. India has exits like Flipkart, but the big learning is how does an ecosystem consistently deliver exits?

Also, if you look at talent pools, they’re largely growing across different parts of the globe. Initially, things started in places like the Silicon Valley, over time, you see the depth and quality of talent across Bengaluru, Beijing, and Jakarta. And it is this talent pool that is building the next wave of companies.

YS: What are the differences in these markets?

KN: There are patterns, but there also are some local nuances. If you look at fintech, the pain points being addressed by tech companies are different. Across Indian, China, and Southeast Asian companies, there is one pain point and it is payments - financial inclusion. Tech companies are solving that.

In Indonesia, over 50 percent of the adult population is either unbanked or underbanked. Tech companies are focused on including them, but the way they are included is different.

If you look at a bank, there are three roles - balance sheet, access to customer, and data processing. But how you acquire these consumers is different from how it was 20 years back. You don’t need to walk into a bank; you have that power in your mobile phone. So yes, there are similarities and local nuances that bring in the differences.

YS: What are the big trends you see in India?

KN: India is a $3 trillion economy. It is on the path to becoming a $5 trillion economy. I think there are several interesting trends. There is data availability, data costs have dropped, and there’s a rise in the penetration of mobile phones. So, the next wave of people is now accessing data.

The initial wave targeted the 40 to 60 million Indian consumers in big cities, but the next one is going into smaller cities. There are several tech commoners using the strong technology powerhouse in India to create software for the world.

Another thing we find very exciting is the growing consumer base of SMEs adopting technology.