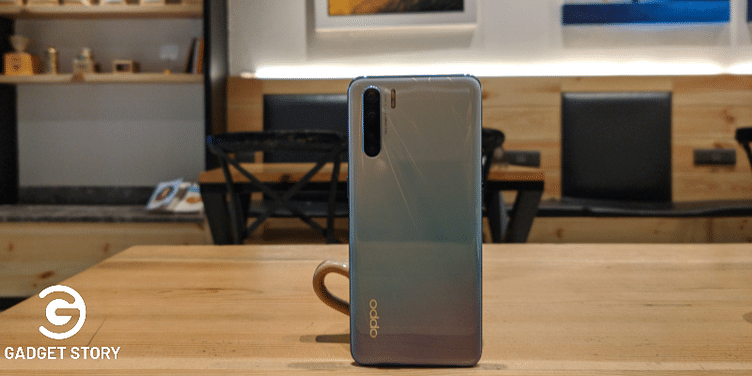 OPPO’s latest smartphone in India has an attractive camera set-up and super-fast charging that could woo casual users. But, will that be enough to offset an outdated processor?

After a year-long hiatus, Chinese manufacturer OPPO is back with a new smartphone in its mid-range F-series. The OPPO F15 is a repackaged version of the OPPO A91, which launched in India last week. (It was released in China last year.)

The F15 sports an eye-catching design, similar to that of the Realme XT and Realme X2 Pro. But, has OPPO done enough with the F15 to warrant a resurgence of the F-series?

The OPPO F15 is much lighter than you’d imagine. It is 7.9mm thin and weighs just 172 grams. The all-plastic build enables the lightness. The display has a tall 20:9 aspect ratio and the phone has a vertical quad-camera setup at the back.

The only downside to the otherwise great build quality is the fact that it lacks a premium finish. In fact, some smartphones with a cheaper price tag (the Redmi Note 8 Pro, for instance) also come with a glass back. OPPO might have lost a point there.

The OPPO branding comes on the bottom left of the back. There is a slight camera bump that makes the smartphone wobbly when placed on a flat surface.

While the display gets bright enough, the sunlight legibility is just about alright. The colours are accurate and the sharpness of the icons and text is visible. The downside is that the notch is prominent and the bottom has a visible chin.

Overall, the F15’s design isn’t disappointing but it’s nothing extraordinary either. For the price, OPPO could have done a lot more to get consumers eyeballs rolling.

One must ask the most obvious question: Why did OPPO choose to use a chipset that was launched in the Q4 of 2018, when smartphones launched prior to that have far more powerful chipsets? Even those devices that are selling at lower prices than the F15 have better chipsets.

The MediaTek Helio P70 may have been a good chipset back in the day, but it is quite outdated vis-a-vis the competition in 2020. The predecessor to the OPPO F15, the OPPO F11, had the same processor too.

While you won’t get any performance lag with non-heavy, day-to-day tasks, it might baffle you that OPPO decided to bring an old favourite back after two years.

OPPO says that it will bring the new ColorOS 7 to the F15 in the next two months. That’s a tall claim, as the company doesn’t have a good track record when it comes to software updates.

At present, the F15 runs on ColorOS 6.1.2, which is built upon Android 9 Pie, and while you do get a lot of customisation, there is also a lot of bloatware.

It might be safe to suggest that ColorOS is one of the least liked Android skins out in the market.

As far as day-to-day performance goes, there is no stuttering or visible lag. With a medium-usage pattern, the F15 does well and does not heat up at any point in time.

It’s when you push the Helio P70 to its limits (for instance, gaming) that it starts to struggle. That’s unacceptable from a device priced at Rs 20,000.

PUBG Mobile changes its default to ‘Medium’ graphics, but when you move to Call of Duty, you notice that the frame drops and lags on the F15. Even when you’re multitasking - gaming, photography, streaming, browsing, etc. - the device fails to live up to its price tag.

And, this is where a more powerful chipset like the Snapdragon 730/730G comes in handy. Casual users wouldn’t complain though.

The F15 sports a 4,025mAh battery with support for 20W VOOC flash charge. With medium-to-heavy, the device can run for 24 hours on a single charge. Without gaming and video-streaming, you could even take it up to 36 hours.

Both the fingerprint scanner and facial recognition systems work smoothly on the F15.

The device might take a few seconds to recognise your face under dimly-lit conditions, but at other times, it is quite satisfactory. The fingerprint scanner might be placed a little off-centre, but you can’t fault it because it is quite fast.

The F15’s cameras are super-fast at auto-focusing and shooting images with the 48-megapixel sensor. In daylight conditions, the 12-megapixel sensor performed admirably well and the output wasn’t over saturated.

The F15 mostly reproduces natural colours, which is a good deed in its price range. The colours may have been muted, in some cases, but that’s better than oversaturation like on the Redmi Note 8 Pro and the Realme X2.

The wide-angle shots, however, were a bit lacking in details. It is quite a task to get the focus right in macro photography.

The night mode on the F15 performs quite well for a device in the mid-range segment. The results were better than those of the Realme X2, and almost on par with that of the Redmi K20.

The Instagram generation will not be disappointed with the F15’s quad-camera setup.

One can’t stop wondering why OPPO decided to revive its F-series. Given the drastic changes that have taken place in the sub-20,000 smartphone market, the F15 feels outdated and underpowered.

The competition - Realme X2, Nokia 8.1 and Redmi Note 8 Pro/Redmi K20 - all perform better, and will be giving OPPO some sleepless nights. With a handful of attractive features like quad-cameras setup and super-fast charging, the OPPO F15 might pick up in the offline market.

Maybe a brand new processor could work wonders too.

But until then, only casual users who’re looking for a sleek but not so expensive upgrade will take to the OPPO F15, while the performance nerds stay away.