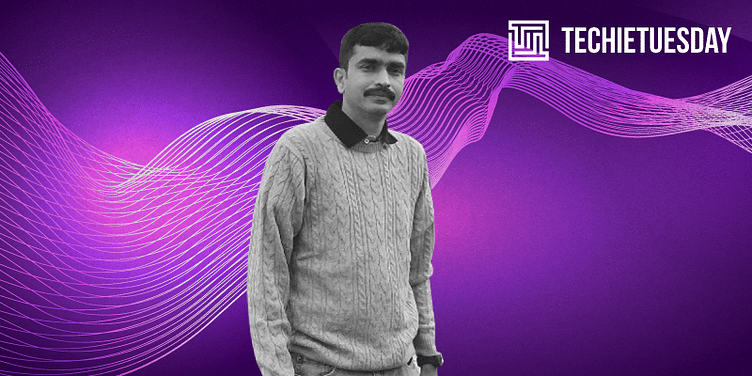 In this week’s Techie Tuesday, we feature Prakash Ramachandran, the CTO of BYJU'S. He talks about his serendipitous relationship with computers, his learnings at CDAC, HP, and Zynga, and how he rediscovered his love for education.

Indian film actor Shahrukh Khan may be exhorting Indian students to “fall in love with learning” by downloading the ﻿BYJU'S﻿ app, but a quiet and unassuming man working behind the scenes has made this possible.

Prakash Ramachandran, the CTO of BYJU'S, one of the world’s highest-valued edtech startups, used gamification to make core concepts easy to understand. This wasn’t a challenge after his stint at Zynga, the US social game developer, and the move grabbed students’ attention and made learning easy as pie.

However, learning to build nimble products and applications came easily to Prakash, who’s a rare CXO in today’s startup world – he doesn’t have a coveted IIT or BITS Pilani tag.

A product of Model Engineering College, Kochi, Prakash says the best part of his college education was the hands-on training it gave him.

“I remember one time we went to our professor and told him that the systems in the computer lab weren’t working. He simply looked at us and said ‘okay, why don’t you fix it’? It was a new college; a small one with a total strength of 480 students. It was where I learnt the idea of hands-on coding, programming, and building things,” Prakash recalls.

Having worked at the likes of HP and for CDAC (building India’s supercomputer Param), coding and technology held more appeal for Prakash than engineering did. But his tryst with computers happened by chance.

The first interaction with a computer

Prakash was born into a middle-class family in Kochi, Kerala. His mother was a banker while his father worked with the state electricity board. The younger of two siblings, Prakash’s first interaction with a computer was when he was 14 years old.

“It was 1991, and my father’s friend was running a computer course nearby; my father enrolled me into this. Initially, I started doing generic things. My curiosity was slowly piqued and I started playing with graphics. Soon, I tried my hand at building small games and then programming,” he recalls.

“I completed my Class 11 and 12 at the naval base in Kochi. A mathematics teacher would need to do some data entry on the computer; it was an opportunity for me to use the system.”

It was a foot in the door, and Prakash used it to open the door wider. His entry into engineering was not just for the course, but because he knew he would get “access to code and programs on the system”. Prakash did a Computer Engineering Course in Model Engineering College.

Building a supercomputer during the time of restrictions

Fresh out of college, Prakash began his career at Barn Systems and soon joined CDAC. “Param, the supercomputer, was being built and I wanted to work on building something,” he says.

This was in 1999. Prakash says it happened to be the time when India had just completed its nuclear test and was on the restricted list.

“We couldn’t get machines with more than two processors, and in those days we needed a system that could process a lot of information and data. I was a part of the OSI networking team, and all of these applications required a lot of compute. So the approach taken at that time was there are certain problems which I break into smaller, and then compute and then going back a little divider, correct. For example, weather forecasting is nothing but taking tons of data and then trying to compute something. We provided the infrastructure for that,” Prakash says.

He adds that in those days extracting one TB data was a challenge, as machines had a one GB hard disk. Prakash worked at CDAC till 2002, after which he joined HP, where he worked on the operating server - HP OS.

“I worked on the machine-dependent layer, which runs only when the machine is booting, shutting down, or crashing. So it helped me learn how to code and program quickly in short durations,” Prakash says.

HP was a change from CDAC. It was his first stint in a private firm. “I was a bit lazy and there were some processes that were long and tiresome. So I ended up automating them. For this, I had to learn a few things and understand applications better,” he says.

Understanding the importance of simplicity

Prakash believes that his experiences at both HP and CDAC are something he carries with him even today. At CDAC, he says, he learnt the importance of looking at building even the smallest components only after looking at the bigger picture.

“A lot of the things needed to be looked at from the fundamentals. Thankfully, I had great team leads who helped me understand the practical nitty-gritty details. It also helped me develop some patience. A lot of things take time to be fixed; just be two lines of code might be creating a problem, but understanding which ones were problematic was something you had to work on relentlessly,” he says.

At HP, Prakash says he learnt the importance of talking to the end consumer. The pre-sales team at HP would take some engineers to client meetings.

“At these meetings, you understand how the product works, how it is used, and how it works for the end consumer. I worked with FedEx on that process. This exposure made me look at things beyond just the technical problem; it showed me how things needed to be approached. It taught me the importance of simplicity,” Prakash says.

In 2004, Prakash joined Support Soft. His stint here led him to understand how engineering integrates with the business as a whole.

“We built several products; a few survived. But interestingly, a few days back, a machine of mine crashed and when I rebooted, it booted with ‘support assist’. This was something we had built. Support Soft automated a lot of processes when a system crashes, to reduce manual intervention,” he says.

After Support Soft, Prakash knew he had to do something new and different and he joined Zynga in August 2009. It was a time when the game FarmVille was the rage, and Cadir Lee, the then CTO of Zynga was looking for a push in India.

“One day before joining I was on a call with Cadir, who wanted to know if I could fix something. I said I was joining the next day but realised he wanted me to fix it the day I joined. I understood then the scramble that happens in the startup world,” Prakash says.

FarmVille was growing exponentially. With no time to keep adding machines, the team had to shift to AWS. Prakash recalls that it was a new system back then.

“We were doubling servers every two days. I was used to two-year cycles. Every single code had to be perfect. Here, if it was good enough, it needed to be deployed. Cadir believed in the idea that ‘give me something good today than the best thing tomorrow’,” Prakash says.

At Zynga, he embraced new learning: in the startup world, you need to do both - run like a tiger is chasing you and also like you’re running a marathon.

Every day, four to five million users were joining. Initially, the team started with small fixes, and soon moved to building the infrastructure and core systems.

“In those days some of the AWS components were new and weren’t stable. So it meant building several systems from scratch.”

Till 2011, Prakash focused on infrastructure. By 2014, he got into game development.

“India didn’t have a strong gaming culture and many of us didn’t have much exposure to game development. We understood the engineering bits, we understood the basics and working, built them, and also took charge of the P&L. Games are a different beast. We were responsible for growth and development, and it meant understanding how games are designed, what makes one sticky, and how to get people to spend,” Prakash says.

Stepping into the world of education

In 2014, the world of games had started shifting. And Prakash felt he needed to “do more and learn more”. He joined Hortonworks, a Big Data company that was working on Adobe Stack and open source.

“The dynamics are different. You need to work with people from different countries and companies,” Prakash says. It was at the same time that Anandamoy Roy, now with Sequoia and then one of the directors at Zynga, introduced Prakash to Byju Raveendran, the Founder of BYJU'S.

Talking about his interest in education Prakash says, “There were a few things and subjects I ended up getting interested in studying after school. That was primary because CDAC and Zynga had people who had strong academic backgrounds and had studied subjects like astrophysics. I was an average student when it came to physics and math, but I found them interesting at work. And it was because someone had taught things to me in an interesting way. I felt subjects had to be taught more interestingly,” Prakash says.

At this time, BYJU'S was slowly moving online and had a strong product offline. The team had built a rudimentary product, which needed to go completely online.

“There was a small team, and most was outsourced. I had to build from zero. In 2015, I worked on building the team and creating a better app,” Prakash says.

The product had a few videos then; the team would call and push online. Initially, it was about showcasing the product better. The team was initially selling an SD card, and going online was imperative.

“There was huge spike after a TV campaign. I realised that there was step one and then 100 in Byju’s book. He just has multipliers,” says Prakash, who now had to build both, the app and the SD Card.

The challenge was that at that point in time nobody was building an edtech product at the scale that Byju had envisaged. Byju’s was focused on being complementary to school learning, and this meant rethinking from a product perspective. This is where his experience with Zynga helped.

“We had to make it more interesting for a child. It meant reducing video times, using gamification, offering content in smaller chunks, and making things interactive,” he says.

Prakash says the team is what helped build a great product.

“Teams are very important. You need people who are motivated intrinsically, especially for products like gaming and education, and it is one of the things I look at.”

Since then, BYJU'S has gone from strength to strength. Today, the team is focused on further scaling the tech and product across different parts of the globe for different kinds of consumers.

Advising techies, he says many new things are coming up today and it is no longer about being an expert in one.

“You have to be an expert in learning and trying new things. There are roles that didn’t exist in 2005, so keep your mind open. Even at Zynga, explaining to people what we do was difficult. So challenge yourself every day,” Prakash says.