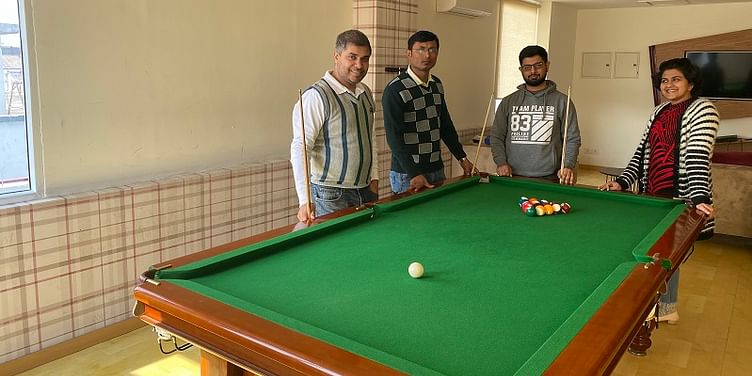 Noida-based Rein Games is a gaming platform aimed at Gen-Z players who can play for money in what the startup claims to be a safe, hack-free environment.

Online gaming startups are revolutionising the way we relax and unwind, but Vaibhav Gupta wanted to take it a step further. As a gaming enthusiast himself, he wanted to conceptualise and create something that would entertain and engage millennials. His desire to create something in the skill-based real-money gaming segment shaped up in the form of Noida-based ﻿Rein Games﻿.

A close observant of the real money gaming market in India—which is home to more than 278 million online gaming users, making up approximately 46 percent of the total 604 million internet subscribers in India—Vaibhav realised that most existing games were just remakes of successful and established real-money gaming proponents in the West.

“High quality, never-seen-before gaming models and concepts, hack-proof entertainment, and a transparent gaming experience that inculcates real competitive spirit is what Indian youngsters and millennials would like to bet on,” says Vaibhav.

This was the trigger for Vaibhav to leave his job at gaming company Octro in 2017 and bid goodbye to a 17-year-long professional career to start up with Rein Games in 2018.

He was later joined by his former colleagues at Octro, Himanshu Devra, Pranav Choudhury, and Nishtha Gupta, and together the co-founders launched the startup’s first game - Real 8 Ball pool game.

Based in Noida, Rein Games is targeted at the Gen Z gamers who rely on high-quality mobile games created in the West.

“We do acquire all of our users via digital marketing. Initial traction is quite important for the success for any game and thus we ran a two-day-long beta test to acquire a few players before we went live,” says Vaibhav.

Rein Games’ business model aims at creating original concept-based real-money games that are to be played for a stake in return of a platform fee.

Currently, 8 Ball Pool is the only game that is available on the platform. “Here, two players play a game of pool and put, say, Rs 100 on stake each. We retain a platform fee of Rs 20 and the winner gets Rs 180. A user deposits and maintains a balance that they could consume over time to play the games. Whatever they have won by playing these games can be transferred to their bank account or mobile wallets,” says Vaibhav.

He adds that one of the biggest solutions that Rein Games has introduced is an ‘uninterrupted’ gaming experience for its players.

“One can reconnect and resume play smoothly by even logging in from another device if network fluctuates. Incoming calls will not act as spoilers, and you don’t have to lose the game. With unreliable data networks, this is a huge confidence builder for our players, who are playing with real money on stake,” Vaibhav says.

He notes that with other online pool games out there, if the data connection fluctuates, or even if the player gets a phone call, the game gets disconnected from the server, and the player ends up losing the game.

Everything that happens in the game is sent to the server in the form of data packets. The server then analyses this data and runs algorithms to make sure that nothing unexpected is happening in the game.

“This is critical since a lot of hackers attempt to hack real money games,” adds Vaibhav.

Batting for innovation and quality

The startup’s aim has been to bring in innovation, in order to stand apart.

“Innovation is severely lacking in the real money gaming segment in India. Most of the game developers are looking to copy existing successful formats with minor variations whereas Rein Games strives to bring newer gaming concepts with real money,” explains the 40-year-old CEO and Co-founder.

The game is entirely built in-house by the team.

The second goal for the startup has been to address the quality of games that are being produced. “Most upcoming gaming companies are looking to release new games in a haste to capitalise on the recent wave of skill-based real-money gaming. However, this haste compromises the quality and experience of the game. At Rein Games, we spend a lot of time in research and subsequent development of the game,” he adds.

The analytics-focused startup tracks down all the players’ money that goes into the system, in order to curb any fraudulent activity.

“Continuous experiments of small and big scale are run on a weekly basis to optimise and improve upon the gamer’s playing experience,” Vaibhav notes, claiming that as a result of which, Rein Games has achieved a good retention level that most virtual money gaming companies are unable to achieve. The startup’s D1 (the percentage of players that return to play the next day after app installation) stands at 45 percent.

Being a game that is played with real money, the founders say that the startup’s services are currently limited to India only.

How a one-year-old gaming company became the No.2 player in the Fantasy Sports arena with 3 million+ registered users

Currently operational in Tier I, II and III cities of India with a comparatively larger user base from West Bengal, followed by Northern and Southern states of India, Rein Games has three lakh app downloads. It sees about 10,000 players a day with an average time spent on the app being 60 minutes. The average prize money won by a player is Rs 300 a day, says Vaibhav. It is a mobile-only gaming platform at the moment, with the app being available for both Android and iOS devices.

The gaming startup, which currently employs 13 professionals, does not want to disclose its revenue but adds that it is growing at 25 percent month-on-month.

“We have raised a total of Rs 5 crore in 2019 in a round led by Dr Ranjan Pai of MEMG and Titan Capital with participation from our friends and family,” says Vaibhav.

Going forward, although the startup aims to add more concept-based games to its portfolio, Vaibhav says the plan is to place bets on a few standalone games, like its flagship product Real 8 Ball Pool, to reach a larger set of people.