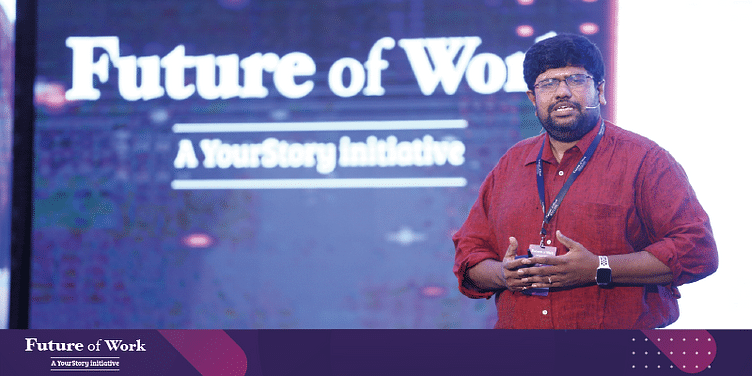 At the third edition of YourStory’s Future of Work, Sriram Iyer, VP, Engineering, Flipkart, urged entrepreneurs to have the multi-disciplinary domain knowledge to foster innovation

“Can you actually engineer innovation? Is innovation a dark art that is based on pure luck or can innovation be systematically developed?” Sriram V Iyer, Vice President – Engineering, ﻿Flipkart﻿, asked a room full of tech enthusiasts at the third edition of YourStory’s Future of Work conference.

Sriram said, with the depth breadth approach, a person can invest 10,000 hours of deliberate practice in a particular subject to make an innovation, while in a breadth-based approach, a multi-disciplinary team or a person learning multiple subjects brings his knowledge, combines and creates new innovation.

Since his time in Ola Cabs, Sriram has been following a method which he calls a ‘knowledge pyramid’. This includes collecting information, trying to understand little of that information (comprehension level), putting hours of practice to understand a specific subject (assimilation level), and finally putting the knowledge acquired to solve problems in multiple domains.

“Once you reach the application level of the knowledge, you don’t stop, but continue to grow deeper. You tend to see what others don’t see – that’s the depth-based approach. The breadth-based approach was made famous by Steve Jobs as connecting the dots approach,” Sriram explained.

Sriram further said the building blocks of new ideas are embedded in the existing knowledge. One of the key techniques to this approach is the unusual pairing where people with two extremely different domain knowledge or one person with knowledge of multiple domains solves a problem in a completely different domain.

Citing examples from his own experience, Sriram spoke about how he used the knowledge pyramid to innovate, and gave examples of Ola AutoConnect WiFi, Ola Play, and Myntra’s Roadster.

Future of Work 2020: Niti Aayog wants to establish India as an AI garage

In the early days, when internet data costs were too high, it made sense to offer people free WiFi in the cabs, Sriram said.

“I am a wireless guy working for a ride-sharing company. So I asked myself why is the experience of a ride-sharing platform broken? Do we go to our house or office and connect WiFi every time? No, it should be automatic. This is where innovation happened, and Ola AutoConnect WiFi was born,” Sriram said.

He explained the experience of having WiFi in the car was very sub-optimal. Cars used to have routers and drivers used to have stickers with a password, and every time a new car comes, they could enter the password and use it.

Currently, Ola is using this complex technology to serve millions of its customers. It also claims to be the world’s first connected car platform for a ride-sharing company.

Cars as a platform have not functionally changed in eight years, and all the controls lie with the driver. But with the advent of the ride-sharing economy, it gave the rider ownership in the car as the controls moved from the driver to the rider.

The success of Ola Play lies at the heart of the stereo in front of the driver, he said. It is designed like a stereo, and anybody who can install a stereo in a car can install Ola Play. Except for the fact that it is an Android system with a Quadcore processor, and 4G high-speed WiFi.

Shopping at a brick and mortar store often leads customers to abandon their carts. And Flipkart’s Myntra, to that effect, wanted to imagine a complete offline brick and mortar shopping experience. This led to the birth of the Roadster brand.

“Fashion changes every three months. There are hundreds of apparels coming in, and it is difficult for anyone to actually provide all the knowledge. Further, there is the price of apparel. The prices are heavily discounted online. We wanted to do price discovery and wanted to know the product discovery. So, we built a product-discovery kiosk where people would take any apparel, put it in the kiosk, and immediately get all the details of the apparel in the display - how will it look on a model, and what can you pair it with,” explained Sriram, the brain behind the innovation.

To solve the cart abandonment issue, Flipkart made a self-checkout counter for the Roadster brand.

“Irrespective of how many clothes you have, you put it in a basket, and the entire billing is done in a few seconds. Then you insert your credit card and as soon as you pay the money, the RFID tags get deactivated. So, there is no alarm when you walk out of the store,” Sriram added.

Wrapping up the session, Sriram urged entrepreneurs to create an environment to foster innovation.

“There is no formula or magic wand for innovation. Try to put in teams that are multi-disciplinary, and you can expect some magic to happen. You need both depth and breadth approach to make innovation,” he concluded.