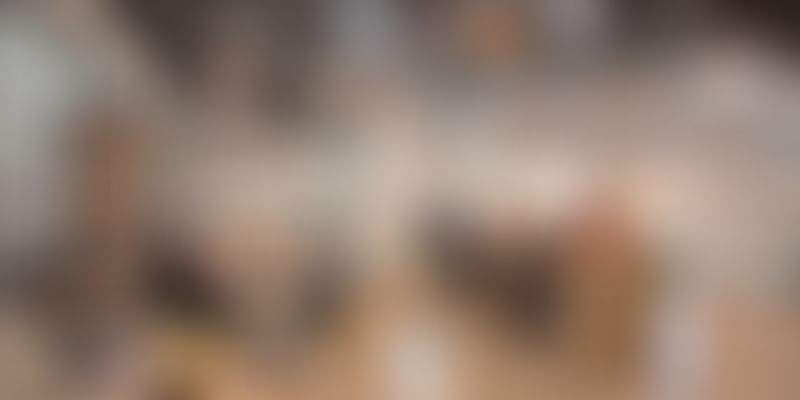 Gurugram-based flexi workspace aggregator Qdesq counts startups like Zomato, Flipkart and others as customers. It lists 600,000 desks on its booking platform and has grown 4X in a year.

Paras Arora spent more than 15 years in commercial real estate, with stints at Colliers and others, until he realised that the sector was ripe for disruption. In 2015, in a post-WeWork world, coworking spaces were fast gaining acceptance.

In India, however, office spaces continued to be leased in the conventional brokerage-led square-feet-based way in most metro cities. Coworking wasn’t a catchphrase yet.

Even if individual owners wished to rent out their spaces to seekers, it was nearly impossible to locate or discover them.

To fix this core pain point, Paras started Qdesq in late 2015. He was joined by techie Lavesh Bhandari as Co-founder and CTO.

The startup launched operations from Gurugram in early 2016.

“We wanted to create a new model for workspaces and disrupt the traditional office leasing demand and supply equation. The goal was to change the language of commercial real estate booking from per-square-foot to per-seat-per-desk.”

Building the ‘Booking.com for workspaces’

It is an end-to-end platform that the co-founder describes as the “Booking.com for workspaces”.

The analogy might seem a little far-fetched, considering that Qdesq aggregates even small, unbranded workspaces in Tier-II towns, making it more OYO-like instead.

The startup operates on an asset-light model. Like other sharing economy players, it doesn’t own any real estate. As a result, Qdesq has been able to reduce the cost burden on workspace seekers by eliminating traditional real estate concepts of long-term leases, lock-in periods, brokerage fees, and so on.

“Our technology platform also helps improves the visibility and discoverability of spaces, especially for the smaller, unbranded, mom-and-pop operators, who do not have the marketing muscle of WeWork or a 91Springboard. We have also been able to bring down the percentage of unused spaces because our solution is offered on-demand and fits the client's current requirement.”

Users can also take a visual tour, compare prices, and schedule a visit at a workspace before booking and payment. Qdesq has deployed key account managers and advisories across select locations to guide workspace seekers.

Qdesq promises to close bookings within days and weeks – even for large enterprise occupancy requirements. In comparison, conventional leases can take up to six months to close, and have limited transparency in the process.

[App Fridays] GoFloaters helps you find and book coworking cafés, offices near you

When Qdesq began in January 2016, it listed only 15 workspaces in Delhi-NCR.

In four years, the startup claims to have grown its network to 2,800 spaces spanning across 48 Indian cities, including Tier I and II centres. Its inventory has grown to 600,000 desks, and Qdesq is currently clocking 1,800 bookings a month.

“Monthly bookings have grown 3.5X in the last 12 months,” the co-founder reveals.

Its revenue has also grown 4X in the last one year. At present, the startup’s ARR stands at Rs 15.5 crore, and it claims to have turned cash-positive in 2019.

Qdesq-branded workspaces can be availed for anywhere between Rs 9,000 to Rs 10,000 per desk per month.

Given the rise of remote working across industries and the surge in demand for flexi workspaces, the startup expects to more than double its revenue to Rs 38 crore by 2021. By then, it hopes to rope in 3,700 workspaces in 64 cities, and clock 2,800+ bookings a month.

Paras shares, “We have come to realise that seekers look for two things at the end of the day: how beautifully a space is designed and how efficiently it is managed. There is a stark difference between coworking spaces and traditional offices, which new-age workers find dull and boring."

"And, they do not want to work from home either because that dips their productivity," he adds.

Qdesq doesn't charge brokerage fees from its seekers. It earns a revenue share or a monthly subscription price for the lead generation and marketing services it provides to workspace owners.

Besides listing independent coworking spaces, the startup also works with large enterprise clients such as Walmart, Zomato, Flipkart, Expedia, and several others.

“We charge large clients an advisory fee for fixing their workspace requirements which are in excess of 50 desks. But for smaller customers, the space providers are charged a cut based on occupancy,” the co-founder explains.

At the time, Ramesh Nair, CEO and Country Head – India, JLL, said in a statement,

“The investment in Qdesq taps into the growth opportunity that the flexible workspace segment offers. JLL’s strong corporate relationships across the globe, combined with Qdesq’s technology platform and preferred partnerships with flex space operators, will help us provide a more comprehensive solution to our clients.”

The startup plans to use the capital in pan-India expansion, technological and CRM upgrades, and entry into international markets. It looks to launch in all gateway cities of Southeast Asia in the next few years.

“Our transaction volumes have been growing over 400 percent year-on-year and with our shared vision with JLL, the opportunity is to scale the platform across Asia,” the co-founder had said at the time of funding.

Qdesq competes with other aggregators like FindMyCowork, CoFynd, Hacker Street, etc. while enabling providers like WeWork, Regus, Awfis, 91 Springboard, Innov8, Skootr, Workfella, and others to list their workspaces on its platform.

According to a JLL study, about 15 percent of commercial real estate in India is occupied by coworking spaces – double the share it had in 2016 – indicating both growth and opportunity in one of APAC's fastest-growing flexi workspace markets.

Paras sums up with, “We know the secrets of workspaces that are hard to discover, and that is where we can make a real impact… on local, homegrown operators.”

A massive untapped market is waiting for Qdesq to make its mark.