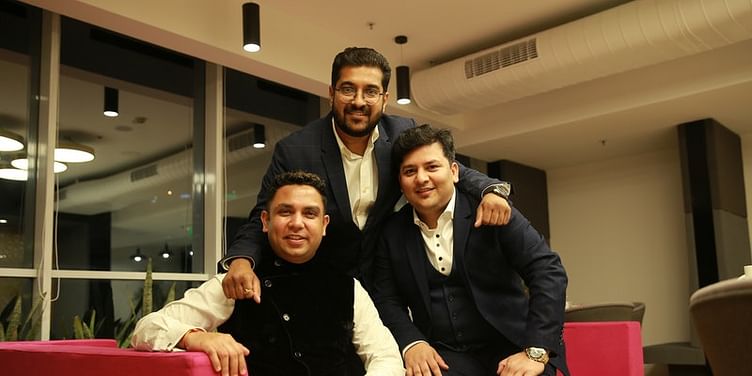 Gurugram-based Skootr is a coworking startup that is focussed on premium workspaces for MNCs, corporates, and SMEs.

When Puneet Chandra, Ankit Jain, and Anuj Saxena were looking to start up, they realised that commercial real estate was managed in an unorganised manner. An MBA from IITM Gwalior, Puneet has donned the entrepreneurial hat several times in the last 15 years, with an IT services company, Bcube, and also working in the real estate space.

Wanting to transform the corporate real estate sector, the trio started Skootr in Gurugram in 2015, as a coworking space that provides customised and managed offices across Gurugram, Noida, Jaipur, and Mumbai. The company has more than 12 centres comprising close to five lakh sqft  with multiple projects in the pipeline.

“Our initial tryst with the seat rental-based workspace model happened fairly early, but it was more towards the BPO side. Then, once we ventured into real estate, we realised the archaic way in which things were being run in the sector. We saw an opportunity to transform commercial real estate that can accommodate the dynamic workspace needs of a young Indian workforce, and growing national and international corporate houses,” says Puneet.

The major challenge the startup faced during its inception was to find its exact niche and market positioning. Coworking was itself a new domain in India, and to establish a sub-domain that evolved the prospect and find takers for it was a big task. At the onset, Skootr catered to the SME segment.

Within two years, Puneet realised that to attain sizeable ROI in the commercial real estate industry, it was important to cater to the MNCs.

“As a small company with just about average financials at hand, it was difficult to enter the segment of the multinational tenancy, as it would require an inventory, which is Grade A and premium. But we took our chances, and today, we can safely say that it has paid off,” says Puneet.

Once Puneet had the idea of Skootr, he roped in school friend Anuj Saxena, and friend from college Ankit Jain as founders. The trio had founded Bcube as well.

“Our Eureka moment probably happened when we hopped on to an opportunity of leasing out a 50,000sqft space within ﻿DLF﻿, the biggest player in the Delhi-NCR region. We were new players in the territory, so DLF had its apprehensions, and it was tough for us to get the space. However, Mr Khattar, who is the CEO of DLF Rental Business, saw something in us and showed his unspoken support by leasing out the entire space to Skootr,” Puneet adds.

While the startup refused to share the charges of rentals, it currently follows two revenue models:

“At Skootr, we see better margins compared to many counterparts in the market. Since most of our clientele includes large corporations and multinational organisations, we can charge a 'brand premium' in exchange for providing a 'branded office' coupled with a bunch of value-added services,” says Puneet.

Currently, bootstrapped, Skootr caters to large corporates and MNCs. It focuses on curating spaces that enhance mindfulness and productivity. Puneet adds that they offer Grade A properties at desirable, premium, and easily accessible locations, with a 30/60-day delivery promise.

Post the WeWork saga, coworking spaces are much sought after. At present, coworking spaces have become very popular and are seeing exponential growth in India. Further, India is the second-largest market for flexible workspaces in the APAC region, second only to China.

With India being called the second-largest hub for startups globally, the coworking market is also saturated with players with different scale of operations. According to a JLL global survey, while the number of people opting for coworking space is on the rise, only around 40 percent of all coworking spaces are profitable.

Startups like WeWork, ﻿Cowrks﻿, ﻿Awfis﻿ or other larger players like 91Springboard, the ﻿Hike﻿, InstaOffice are working in the space, with many new players entering the market.

Skootr focuses on providing premium spaces. “The majority of our clientele belongs to a segment that needs a standard of the product. Hence, we stick to only such buildings/properties which correspond to international standards. Our key clients include The Economist, Expedia, Baker & Hughes, McDermott, ﻿Clix Capital Services﻿, Magic-bricks, among others,” adds Puneet.

The pricing for each client is dependent on the space, location, and level of customisation. However, Skootr’s charges are approximately 25-30 percent higher than its counterparts.

“Since inception, Skootr's balance sheet has remained PAT-positive and has grown at a rate of 100 percent year-on-year. We are nearing a million-dollar monthly turnover, and are already generating a bottom-line (EBITDA) of $150,000 a month,” says Puneet.

A team of 110 employees, Skootr will be launching another three lakh sqft in the Delhi-NCR region shortly.

“Additionally, properties have been identified at other cities such as Mumbai, Pune, and Hyderabad to establish a larger geographical presence and cater to a wider audience base,” says Puneet.