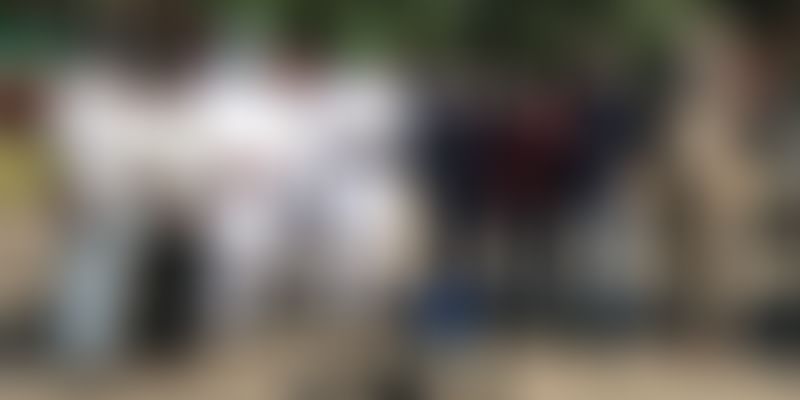 Garuda Aerospace is helping several states across the country carry out automated drone-based sanitisation projects to disinfect public spaces to contain the spread of coronavirus.

Before the coronavirus outbreak, drone startups in India had one main concern - regulatory grey areas. Often seen as a security threat, drones were initially used only in the armed forces. But gradually, they percolated into the domain of civilian activity, and were used for industrial applications, imagery, and surveillance.

But drone startups have now managed to capture the limelight in combating coronavirus by playing a key role in disinfecting places across the country.

Chennai-based Garuda Aerospace is one among them. Founded in 2016 by Agnishwar Jayaprakash, the startup, which has built several agricultural drones, is now helping the government in drone-based sanitisation projects.

“We have drones for 38 different operations, which include sanitisation, agriculture spraying, mapping, industries, security, delivery, and surveillance. We have individual departments for manufacturing parts, importing parts from other countries, sourcing parts from domestic partners, foreign institutional R&D partners, an indigenous autopilot division, and finally an assembly line to bring out the finished product for testing and calibration,” says Agnishwar.

An ISO 9001 firm, the startup was selected by the United Nations as one of the top 10 socio economic innovations of 2016.

At present, Garuda Aerospace has a manufacturing facility incubated at Agni College of Technology, Chennai. According to the founder, the college ground has become an ideal testing location for all its prototypes.

How does it help in the current crisis

For the past few weeks, the startup has been using unmanned aerial vehicles (UAVs) to disinfect around 3.28 million sq km area across India to prevent the spread of COVID-19.

Named as the Corona killer (CK), these automated UAVs aid in the sanitisation of crowded locations such as markets, metro stations, airports, schools, colleges, hospitals, and government offices, which otherwise would have been an impossible task for public workers to undertake a manual spraying process.

“Our DaaS (Drones as a Service) ecosystem can accomplish the sanitisation operations in a quarter of the time. Automated sanitisation aims to address inaccessibility, speed, and efficiency of public health workers who are conducting manual spraying operations under severe health risks to themselves and their families,” says Agnishwar.

Using drones is more advantageous due to the accessibility, which enables them to reach heights of up to 450 feet and spray disinfectants on buildings, which is impossible to be done manually.

The CK 100 sanitisation drone consists of patented autopilot technology, advanced flight controller system, and is equipped with fuel efficient motors that enables the drone to be deployed for 12 hours a day. It has a payload capacity of 15-20 litres, flight duration of 40-45 minutes, and maximum ceiling height of 450 feet, which is sufficient to disinfect 99 percent of tall buildings across India. Each drone can cover 20 km a day.

“Our existing fleet of 300 CK-100 drones can conduct sanitisation operations covering 6,000 km every single day. Garuda Aerospace has been the market leader in the drone industry, and has also designed a DaaS tech platform, which can aggregate over 16,000 drones from our associate companies, ready to be deployed across India,” says Agnishwar.

The startup said it sources raw materials from the US, Spain, Germany, Taiwan, and Japan.

A Harvard Business School alumnus, Agnishwar got the idea of starting Garuda Aerospace when he was representing India at an international swimming competition. He saw how underwater cameras were extensively used in foreign countries to help swimmers alter their techniques.

“I had the vision of using drones to help me get better in swimming. I developed a drone with the help of my engineering friends, and it worked wonders for my training. Later, after retiring from the sport, I founded Ignite India, which was focussed on building innovations for social and economic change, and it became the largest innovation ecosystem in the country, and was established in 7,500 schools in collaboration with the United Nations,” says Agnishwar.

“We had a lot of amazing ideas, and so we wanted kids to pitch in a TV show format,” he adds. It was then that he produced a TV show called 7th Sense, which was loosely based on Shark Tank, but it was for children. The best performers were rewarded with chocolate showers, gifts, etc., and drones were used to shower children with gifts.

“I realised the use case of drones could be vast and wide, and decided to start Garuda Aerospace,” says Agnishwar.

“Drone technology has had several regulatory roadblocks, which has stunted the growth of the industry for many years,” he says.

Agnishwar adds that every drone varies in its manufacturing and set up costs. The startup made an initial investment of Rs 1 crore in 2016 to set up the basic facility, which had the capacity to start the assembly line.

Drones used for small event coverage can cost around Rs 50,000, and can go up to Rs 5 crore for those used in the military, armed forces, etc.

The startup has so far received work orders from Smart City Municipal Corporations of Varanasi, Raipur, Bhopal, and Municipal Corporation in Chandigarh; and from Jaggayyapeta, Kurnool, in Andhra Pradesh. Apart from this, it is currently servicing eight states and 26 cities. Many private companies have also signed three-year contracts for conducting sanitisation operations using drones at Rs 30,000 per day.

Additionally, Garuda Aerospace has worked for the Tamil Nadu Electricity Department and the TN Health department to commence sanitisation operations. The startup has also worked during severe emergencies such as Chennai floods in 2015, Cyclone Vardha in 2016, and during Kerala floods.

The team consists of 45 full-time employees, and 500 contract pilots established in 26 cities across India.

“We aim to do the same during the B2C segment via aggregation as well. In just over a week, Garuda has received work orders for nearly $650,000 or Rs 5 crore from the B2G and B2B segment alone. We project Rs 35 crore to 40 crore inflow from this particular product segment of sanitisation alone over the next 18 months as we launch our B2C services,” says Agnishwar.

Apart from Garuda Aerospace, some of the other startups helping to fight the COVID-19 crisis is Mumbai-based ideaForge, which is monitoring social distancing, and there is Telangana-based Marut.

A group of researchers at IIT-Guwahati have also developed a drone for disinfection of larger areas, while another group has come up with a drone equipped with an infrared camera, which can help in the thermal screening of groups without human intervention, and to identify suspected COVID-19 cases at an early stage once the lockdown is lifted.

The startup has secured Rs 3.5 crore in funding over the past four years, and has a pan India presence.

Agnishwar says that over the years, Garuda Aerospace has been manufacturing indigenous drones in India, and is being guided by retired IAS, IPS, Army, and RAW officers, while also being advised financially by several corporate honchos from companies like Boeing, KPMG, Trans Advisory, CBRE, etc.

“Garuda Aerospace can easily scale from a national market leader to a global market player in the next few years,” says Agnishwar.

“We also propose a drone-based Swachh Bharat campaign to clean India on a regular basis to prevent the spread of COVID-19, while also being prepared for future pandemics and communicable diseases,” he adds.