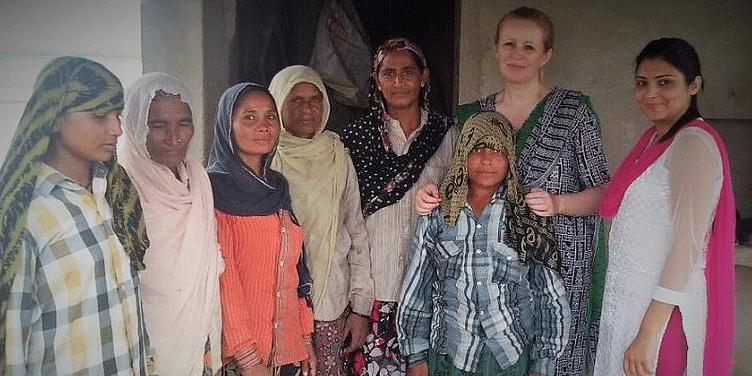 In this exclusive first-person account, we share an expat social entrepreneur’s view on the impact of COVID-19 in India, her responses to the crisis, and insights on how India should rebound.

I grew up in Northern Ireland and lived in a number of countries, before moving to India in 2018. I devour world news daily, so I become knowledgeable of the coronavirus as soon as the news become public.

I followed it closely, and first thought it would be confined only to China, or that it would fade away. Little did I realise how it would spread around the world – including to my new home, India.

I have joint UK/Irish citizenship, and left Northern Ireland at the age of 21. Since then I have lived in several countries, including Canada, Australia, and New Zealand but primarily Germany and now India. I started coming to India in 2010 as a regular visitor and after 2014 lived between Germany and India for several years before moving here exclusively in 2018.

I come from a corporate background and worked for several multinationals, including Microsoft. In 2014, I downsized my corporate job and founded an NGO, United for Hope, doing rural development work in India (see earlier ﻿YourStory Media﻿coverage here).

Most recently I become co-owner of a horse-riding club! I live in a housing society in Gurugram with my Indian husband, four-year-old daughter, and mother-in-law. My 18-year-old son is in Germany in his final year of school.

Although the coronavirus case numbers are still relatively small in India, I support the government’s early intervention. This is because I personally know through my rural development work, the dire situation of healthcare facilities in rural areas and the devastation it could cause.

Ten days ago, I tried to reach my NGO projects in eastern UP, but the Chief of Police had called my local staff and asked me (as a foreigner) not to come, so I had to be off-boarded from the plane. Seeing what happened in the days following that, with the curfew and lockdown, it was for the best. I continue to support my team from Gurugram.

My NGO communities in eastern UP are under strict lockdown. Before this we were carrying out awareness work but now that a few days have passed and things are settled, we are again working out ways to remotely support the communities in this crisis.

As well as supporting my NGO projects remotely, I am in discussion with several nationwide organisations to see how I can contribute to their efforts, as a consultant based out of Gurugram. My experience is in the planning and execution of complex projects, so it’s a valuable skillset right now. I want to look back and know that I contributed in some way in India’s time of crisis.

I have also become the new co-owner of a horse-riding school, Duke Horse Riding Club, Gurgaon. Fortunately, I have police permission to attend to the horses and go there every few days to check on their well-being and bring supplies to the staff.

Yesterday, a horse had a fall with an injury that needed immediate care and we had to be present for the vet. It’s great to get to spend these few hours with the horses and also get a peek at the outside world.

I am someone who likes to spend long periods of time alone and there is plenty of work I can do remotely but the lack of access to outdoors is of course difficult. It’s also difficult to keep a child entertained indoors, but she is managing very well so far. It’s been interesting to hear the views of other residents and watch the society deal with the emergency.

I have been living in India for quite some time, and am well versed with Indian ways of life. I have an Indian family and incorporate Indian behaviours, so I think this familiarity of being a resident comes across in my interactions. I have felt no discrimination at all – except that I couldn’t reach eastern UP as mentioned earlier (but I fully understand the reasons why).

Grasping the dimensions of this virus crisis has been an emotional roller-coaster, from fascination, to shock, to anger to acceptance. I have been living an unconventional life for the past decade so am not prone to panic or rigidity.

My only real personal worry was being able to get access to Western food. Lockdown is bad enough – but impossible for me with only rice, roti, and vegetables! Of course, I can’t really complain, given the hardships of countless others. And, there is also the worry of not being able to reach my family abroad if something were to happen – but they are all locked down and taking care of themselves well.

Generally, I am someone who is full of action and ideas, so in some ways, this is an ideal scenario for me to stretch myself in new ways, find the time to complete backend-type work and also be able to spend time with my daughter.

I am waking up, full of adrenalin, very early, and immediately looking at the overnight international news and the bombardment of WhatsApp messages that are constantly on my phone.

I get my tea and then read the e-version of the Indian newspapers as I feel the newspapers give a much more comprehensive view than the online portals. I rarely feel bored. In fact, the days seem somehow much fuller than before.

As a joint citizen I look to what’s happening in both Ireland and the UK. As I spent a long time in Germany and my son is still there, I also am following the status there. Ireland has responded sensibly and faster than many other nations.

The UK dragged its feet and denied the reality for too long and there is a lot of worry about how their already over-stretched healthcare system can cope. Germany has an excellent healthcare system and a low mortality rate.

I think India has reacted decisively and comprehensively and I am proud of the spirit of the Indian people in getting on board with this. The initial supply confusions of the first few days were sorted out quickly and it’s my hope that the returning migrants will too find a solution very soon and the poor will be given adequate support.

Certainly, I feel that the intention to make that work is there from both the government and society.

When this is all over, what India needs to do is invest massively in its healthcare system proactively so that an emergency situation in future has a much better base to support its population.

As for me, it’s a bit early to say what I would do after this crisis as the situation is still fresh. But I’ll book a trip to see my son and I’ll appreciate being outside much more than before!