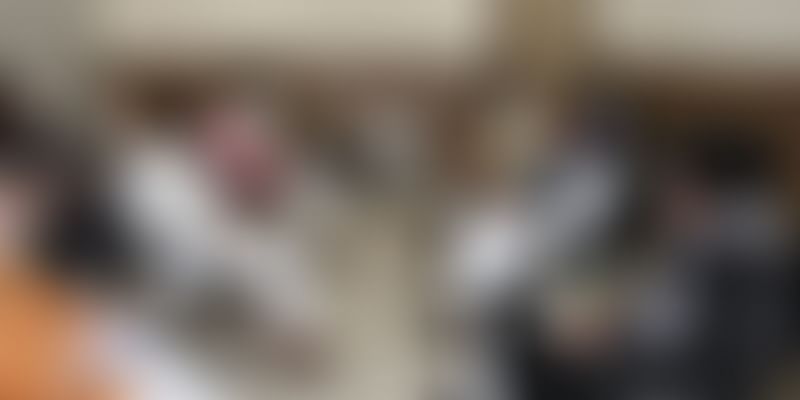 Defence Minister Rajnath Singh chaired a meeting of Group of Ministers (GoM) with a focus on finding ways to mitigate the hardships being faced by people across the country.

Defence Minister Rajnath Singh on Saturday chaired a meeting of a Group of Ministers (GoM) with a focus on finding ways to mitigate the hardships being faced by people across the country.

It was the fifth meeting of the GoM headed by the defence minister.

"Interacted with the GoM on the COVID-19 situation. We discussed ways to mitigate the hardships faced by the people and the role ministries can play in providing relief to people," Singh tweeted.

The lockdown had shone the spotlight on the miseries of lakhs of migrant workers who travelled hundreds of kilometres on foot from several urban centres to their villages, grabbing national attention.

Several opposition parties have demanded the government announce specific welfare measures to help poor people as the lockdown has triggered job losses due to economic disruptions.

He said the guidelines to allow limited activities and the measures as announced by the Reserve Bank of India were also appreciated.

"The GoM obtained feedback from various ministers on the overall situation. It appreciated the decision of gradual opening up of economic activity in areas which have not reported any coronavirus cases," said a source.

Sources said the GoM also appreciated disbursement of Rs 31,000 crore to more than 33.25 crore beneficiaries under the Pradhan Mantri Garib Kalyan Yojana to help the economically weaker sections of population.

India went under a total shutdown of 21 days from March 25 to April 14 to fight the coronavirus pandemic. On Tuesday, Prime Minister Narendra Modi announced extending the lockdown till May 3, adding the drastic measures would be relaxed in some areas from April 20.

According to the Union Health Ministry, India has recorded a total of 14,378 coronavirus cases and 480 people lost their lives in the infection.