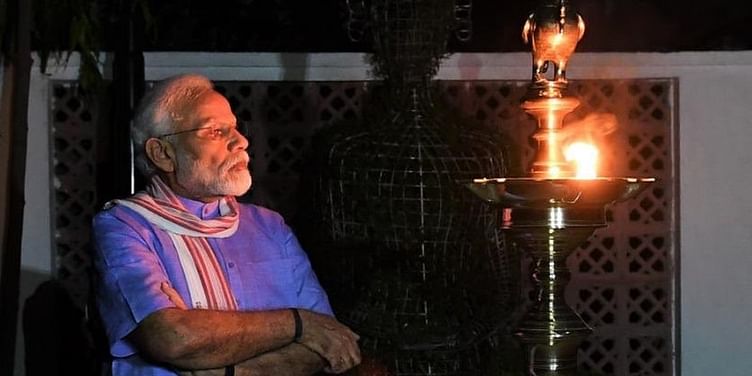 PM Narendra Modi had urged people to switch off lights and light up lamps, candles or mobile phone torches for nine minutes at 9 pm on Sunday to display the country's 'collective resolve' to defeat coronavirus. The power supply ramp-down and ramp-up was very smooth, with no disruptions.

A nine-minute lights-out event on Sunday evening went off well without any disruption in the electricity grid after the government and utilities put in place elaborate plans to deal with the sudden drop and then a quick spurt in demand.

Prime Minister Narendra Modi on Friday urged people to switch off lights at their homes and light up lamps, candles or mobile phone torches for nine minutes at 9 pm on Sunday to display the country's "collective resolve" to defeat coronavirus.

Power Minster R K Singh said, "The power supply ramp-down and ramp-up - they (officials) handled very smoothly, and I along with my senior officials -- power secretary, POSCO CMD -- were personally monitoring the situation from National Monitoring Centre in the ministry. I congratulate all the engineers of NLDC, RLDC, and SLDCs for handling the situation very efficiently, especially in huge response to the Prime Minister's call".

The power consumption went down from 117GW to 85.30GW within the spin of around four minutes leading up to 9 pm. That was much more than the anticipated fall of 12GW, the minister said. The ramp-up was very smooth at around 110 GW after the dip in demand during light-out, he said, adding that no incident of any power failure was reported.

He also lauded power gencos NTPC and NHPC for rising to the occasion. There was good contribution from hydro power sector, Singh added.

There were apprehensions about an adverse affect on the electricity grid due to the blackout among people, which were dispelled by the Ministry of Power on Saturday.

The government on Saturday sought to assuage fears of electricity grid instability due to simultaneous switching on and off of most lights in the country, saying adequate protocols were in place to handle the variation in demand without causing any damage to appliances.

Several states shot off letters to power utilities to take steps to deal with the possibility of a sudden drop in electricity demand, which has already dipped 25.82 per cent to 125.11 GW on April 4 from 168.66 GW on the same day last year, mainly due to the lockdown, which shut down most businesses.

Power System Operation Corp Ltd, the agency responsible for managing the electricity grid, had said lighting load of household consumes may be no more than 12-13 GW.

"Unlike normal operation, this reduction in load of the order of 12-13 GW would happen in two to four minutes and recover nine minutes later. This sharp reduction in load and recovery, which is unprecedented, will need to be handled through hydro and gas resources," it had said.

Its game plan of managing the sudden change in demand was to reduce hydro power generation during 6:10 pm to 8:00 pm on Sunday and conserve it for providing flexibility during the 9:00 pm event.

Also, coal-based generators as well as gas fired power stations were to be scheduled in a manner so as to manage the peak demand.

The government on its part moved to assuage any concerns on this front, saying the call was only for voluntary switching off the lights, and appliances such as computers, TV, refrigerators and ACs were to function normally.

Also, lights in all essential services including hospitals, police stations, manufacturing facilities, as well as street lights were not to be switched off.

"Some apprehensions have been expressed that this may cause instability in the grid and fluctuation in voltage which may harm the electrical appliances. These apprehensions are misplaced," the power ministry had said on Saturday.

This was not the first time the country went for a blackout, as earlier too such exercises have been conducted for initiatives like Earth Hour. India went through a grid failure in 2012 due to technical reasons.