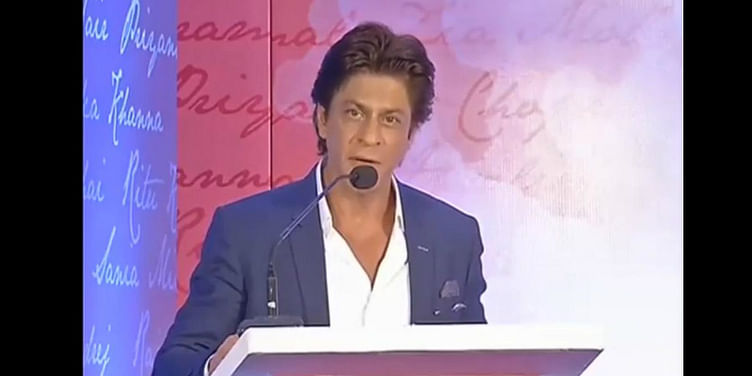 Bollywood superstar Shah Rukh Khan on Thursday announced several initiatives to help the Central and state governments in their fight against the coronavirus pandemic.

Bollywood superstar Shah Rukh Khan on Thursday announced a series of initiatives to help the Central and state governments in their fight against the coronavirus pandemic.

The actor has taken the help of his companies -- Kolkata Knight Riders, Red Chillies Entertainment, Meer Foundation and Red Chillies VFX -- to provide support to the governments.

"Given the enormity of the task, my team and I discussed ways to contribute in our own modest way. We have come up with a series of initiatives, which we hope will make a small difference," he said in a statement posted on the Twitter handle of Red Chillies.

The actor lauded the efforts of Prime Minister Narendra Modi and chief ministers of the states, particularly naming Uddhav Thackeray, Mamata Banerjee, and Arvind Kejriwal, in the fight against the COVID-19.

According to the Union Health Ministry, the number of COVID-19 cases climbed to 1,965 in the country on Thursday while the death toll rose to 50.

Shah Rukh said he along with his wife Gauri Khan and business partners -- Juhi Chawla and Jay Mehta -- will be contributing to the PM-CARES Fund through IPL franchise Kolkata Knight Riders (KKR).

Prime Minister's Citizen Assistance and Relief in Emergency Situations or the PM-CARES Fund was launched by Prime Minister Narendra Modi to combat health contingencies like the coronavirus.

Shah Rukh and Gauri will also be making a donation to the Maharashtra CM's Relief Fund through their film banner Red Chillies Entertainment.

The KKR franchise and his NGO Meer Foundation will work with the Maharashtra and West Bengal governments for the supply of 50,000 Personal Protective Equipment (PPE) for the healthcare professionals, whom Shah Rukh called the "real heroes" of the battle against COVID-19.

Meer Foundation has also tied up with Ek Saath - The Earth to provide daily food requirements to over 5,500 families for at least a month in Mumbai.

Shah Rukh said a kitchen will also be set up to send out 2,000 freshly cooked meals everyday to help households and hospitals whose daily needs aren't being fulfilled.

In association with Roti Foundation, Shah Rukh's NGO will provide three lakh meal kits to 10,000 underprivileged people and daily wage labourers daily for at least a month in Mumbai.

Meer Foundation has joined hands with Working People's Charter to provide basic essentials and grocery items for at least a month to over 2,500 daily wage workers in Delhi.

Shah Rukh said in the current times, everybody must come together and support each other.

"This crisis is not going to pass in a hurry, it will take its time and its toll on all of us. It will also show us that there isn't really a choice between looking out for ourselves and looking out for one another.

"There's nothing more obvious in the spread of this pandemic, than the fact that each one of us is inextricably connected to each other, without any distinction," the actor added.

He said as a nation and as a people, it is "our duty to give it all we've got".

"I am going to try my best and I know each one of you will do so too. Only together we will be able to fight through these difficult and unimaginable days," Shah Rukh said.