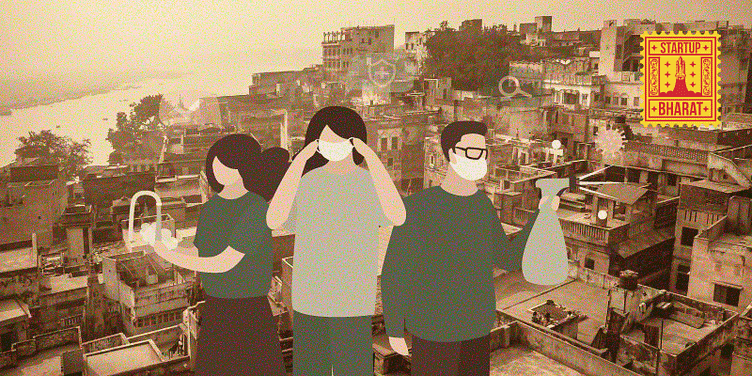 Startups from the metros might have been well equipped to deal with a lockdown. But how is the entrepreneurial ecosystem from Tier II and Tier III cities of India dealing with the coronavirus-led economic slowdown?

The novel coronavirus has hit the economy worse than the Great Recession of 2008. Companies are laying off jobs, delaying promotions, and employee bonuses have taken a backseat. In fact, amid the COVID-19 crisis, people are more worried about remaining employed, more than anything else.

It isn’t surprising that the Indian startup ecosystem is facing the brunt of this economic slowdown.

If the spread of coronavirus is not contained, chances are a lot of early-stage startups will have to risk cash burn, or even pause operations. The threat of losing jobs, with the current situation coinciding with the financial year-end, is higher than ever.

According to a report by Nasscom, India’s Tech Start-up Ecosystem, the Indian startup ecosystem has the potential to create up to 12.5 lakh direct jobs by 2025. In fact, in 2019 itself, the ecosystem had created up to 4.3 lakh jobs.

While startups in the metros are well equipped and have the facilities to “work from home”, how are small-town startups dealing with the situation? YourStory spoke to a few startups from Tier II and III cities of India to understand how they are dealing with the unfolding coronavirus crisis.

‘Most meetings can be emails.’

Gone are the days of hour-long meetings with every team member present in the room. The coronavirus era, or the “quarantine economy” has promoted the use of video conferencing platforms like Skype and Zoom. In fact, Zoom, which specialises in remote working and video conferencing, has been one of the biggest gainers since the COVID-19 outbreak. And startups from beyond the metros are not shying away from the use of these tech tools.

Shrijay Sheth, Founder of ﻿LegalWiz﻿, says, “Fortunately we had invested in technology and our entire ERP CRM is cloud-driven. Operationally, not a lot has changed.”

Shrijay has divided his employees into teams, and spends 50 minutes with each team every day. “We use these video conferences to raise concerns, address doubts, and communicate better.”

For Patna-based edtech startup Cymatic, the shift to remotely working has not been much of a challenge. “Besides Zoom, we are using our own platform for video conferencing,” says Founder Kaushik Sharaf. Cymatic provides interactive virtual classrooms and peer learning using synchronisation.

Ranchi-based recruitment platform Biofie uses Google collaborative sheets to identify deliverables of team members, at any given point of time.

However, to make the most of these tools, a strong internet connection is mandatory. And not everyone is blessed with one.

Dewaker Baset, Founder of Gangtok-based educational travel startup ﻿Invacations﻿, says, “Mobile networks are not great in the hills and the odds of coordination are more for us. Remotely working is not as smooth as working from the office is.”

Dewaker feels that the travel industry is going to face a setback for the next six months. “We had established certain targets; those have been shattered. It is like starting a business from ground zero,” he says.

Going ahead, Invacations will innovate its offerings and use technology for marketing.

FareFirst, a Kannur-based travel startup, has a similar opinion. CEO Yajnesh T says the travel industry is facing the maximum burn. The startup’s monthly flight searches have gone down from 4.5 lakh to almost nil. “We will not be able to survive the next three months unless we do a pivot,” Yajnesh says.

Similarly, for Jaipur-based bootcamp startup ﻿Forsk Coding School﻿, almost 60 percent of the revenue comes between the months of May and July. However, looking at the current scenario, Founder Yogendra Singh is not expecting the physical bootcamp to take place.

“Since the last two weeks, we are running free live classes to ensure traction for an online cohort that we will set up in mid-April,” he says.

Forsk recorded 2,000-plus registrations in the first week of starting its live classes, which are usually one-week long. The startup is banking on these interactions to later launch a paid model of online courses.

Forsk has a secondary revenue stream where it does consultation for its clients. Yogendra says this has been helping the startup sustain, and it can stay afloat for a couple of months more without the direct source of revenue.

Jaipur-based ExpertRight, which bridges the gap between freelancers and service-seekers or companies, has been adapting to the nuances of the gig economy since inception. Thus, not much changed for Founder Ayush Goyal, when Prime Minister Narendra Modi announced a 21-day lockdown across the country.

“Being from a small city, our rent and operational costs have always been minimal. Thus, it is not as difficult for us to manage cash burn as is for consumer-facing companies,” he says.

LegalWiz is keeping unnecessary expenses in check, and shrinking its marketing budget. “We are identifying money-bringing activities,” Shrijay says.

Kaushik Sharaf, Founder of ﻿Cymatic﻿, says, “Looking at the recent volatility in the market, one of our investors backed out. However, we continue to receive support from the KPS Kesri, President of Bihar Industries Association, and are also in talks with few other HNIs, angel networks, and early-stage VCs.”

Market trends during the pandemic

Times like these call for abnormal or never-seen-before trends in the market.

ExpertRight reports that there has been a decline in the demand for freelance writers in the hospitality and travel industry. “Companies in the healthcare sector are hiring more animators, probably to produce product and explainer videos,” Ayush explains.

ExpertRight has seen a surge in the demand of freelance developers and designers. “The number of hires in the design and developer space has gone up by 1.5x,” Ayush says.

For LegalWiz, demands have dropped. Despite the startup and government bodies being operational digitally, LegalWiz has seen a 50 percent dip. “The first few days of lockdown saw little or no demand. However, after a couple of days, things are improving,” Shrijay says.

He also believes that many companies are deferring projects because the government has pushed dates for fulfilling legal compliances to June now.

ExpertRight has hit the pause button on the hiring process. On-boarding process for new employees the startup was hiring has also been paused.

Biofie, which uses video resumes and AI-powered matching processes to make the job search and hiring process efficient, has seen more traffic on its website, from the applicant side.

“People have more time to think about and explore newer opportunities. Most of us tend to delay the job searching process because we are busy, but being at home, people seem to be more interested,” Biofie Founder Mrityunjay Sharma says.

Having said this, Biofie has not noticed any dip in registration from the employer’s side as well. “Startups with expansion plans are on their path; they are not much affected by the lockdown. Bigger ones have stalled recruitment,” he says.

On the candidate side, for the same ad spend, Biofie has seen a 10 percent increase in registrations. The startup has made registration free for the next three months for candidates.

Invacations is not getting any business yet, but it has enough cash reserves to pay employee salaries for the next four months. “We are not laying off any jobs but would not be able to offer any bonus right now,” Dewaker says.

However, Invacations anticipates a huge market once the situation gets better and is planning to eventually hire more people once the market opens up.

Despite the turmoil, entrepreneurs feel that every challenge is an opportunity, and that there is some “blessing in disguise”.

Shrijay’s LegalWiz is taking a step back to assess the situation in a more holistic manner. “When you are in a startup, you often do not get the time to check what’s working and what’s not; we are taking this time to assess those matters,” he says.

“We are now more confident about the flexibility of the team, and the warmth between the team members is overwhelming,” he adds.

Similarly, Forsk has been planning to launch a hybrid model for some time now. The lockdown has pushed it on to that path. “The user’s mindset about online coaching is changing,” Yogendra says.

To ensure education is not disrupted and help students continue their learning process, Cymatic has provided a 15-day course, free of cost. Going ahead, Kaushik plans to extend that for another 15 days. Employees at Cymatic are also voluntarily contributing up to 30 percent of their salaries to the PM CARES Fund.

Aghin Johnson, Founder and CEO of Kochi-based Socialmob, which connects artists and fans, says, “The retention rate in our platform is higher and engagement of users on the app has substantially increased. We are seeing users from newer geographies.”

Ayush, of ExpertRight feels, that his startup has not faced the downside of this pandemic; he has only noticed a shift in the mindset of recruiters.

Cymatic, which was hoping to get 2,000 new registered users by the end of 2020, has already seen 900 new registrations, and plans to meet its target for the year by May.

“Let's see how the wind unfolds from here. Hope is a beautiful thing,” Kaushik says.

(With inputs from Apurva P)