[Podcast] How to pick the right idea and launch your SaaS startup: Shekhar Kirani and Krish Subramanian 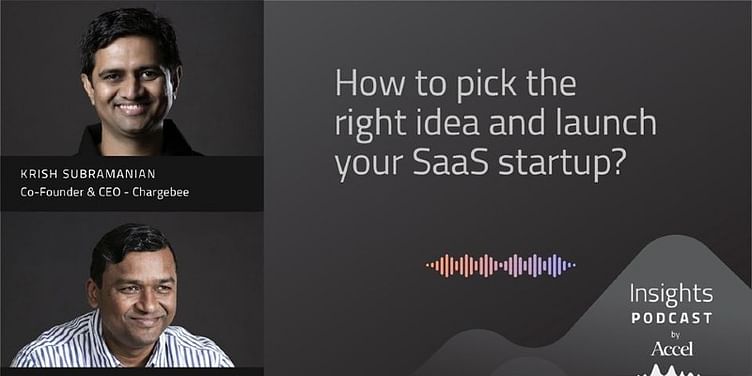 In this episode of the #InsightsPodcast series, we speak to Shekhar Kirani and Krish Subramanian on the best practices for building a SaaS company out of India.

In this episode of #InsightsPodcast series, we continue our discussion with Shekhar Kirani and Krish Subramanian on SaaS, diving deeper into starting a SaaS company, and some of the best practices for that.

Shekhar is a Partner at Accel and focuses on early-stage investments in SaaS. Krish is the Co-founder and CEO of ﻿Chargebee﻿, which specialises in subscription management and billing. Chargebee today serves customers in 53 countries and processes over $3 billion of annual invoicing by managing millions of subscriptions around the world.

Shekhar and Accel have been part of the Chargebee journey from its seed stage in 2014.

Shekhar starts off with his famous mountain analogy. Drawing parallels between the journey of a founder and that of a mountain climber aiming to reach the peak, he says, “Most founders pick the mountain they see first and start climbing before thinking about whether this is the right mountain to climb and are they well prepared to climb because it takes the same effort, time energy, and hard work, whether you climb a small mountain or a large one.”

This happens more often as a result of the founder’s strong passion for the idea, but realising this when they’re halfway through their journey makes it very tough to abandon the mountain they’re climbing to go after a new larger mountain (opportunity).

“To those who’re starting today, I would recommend taking time out to study the market map of what mountains exist in the area you’re interested in and talk to 50-100 potential customers and ecosystem stakeholders to validate the problem statement,” Shekhar says.

Krish talks about the immense value that comes from having experience of working in the industry. “Learning on the job is like a fast-track MBA; somebody pays you to actually learn on the job,” he says. Context on the industry and how to build a business is extremely important before going out to solve a problem.

Being the first mover

There are plenty of examples when being early to the party and riding a new wave early on has helped companies chart success stories. Krish and Shekhar share analogies to exemplify how being among the early ones to spot a trend can help build a moat.

Shekhar chimes in with another mountain analogy, saying: “I love those mountains that are small today, but as a founder, you know ahead of everyone else that the mountain is a growing mountain. By the time everyone realises, you’re already halfway through.”

“Another interesting opportunity for those based out of India is going after established markets where there are a lot of players but they’re either tired or not able to innovate fast enough with modern toolsets, giving an opportunity for you to build a better product that is able to show 2–3x value at half the cost,” Shekhar says.

A longer runway with the same capital, ability to offer 24X7 support, ability to assist with implementation, engineering capability, and intent to build multiple integrations, and service-level advantage to profitably serve SMB customers make India an excellent launchpad for starting a SaaS company

Shekhar and Krish share the traits of a good founding team: diversity of thought and domain expertise, ability to learn and support each other, members bringing unique skillset to the table, and someone with the ability to build the product and take it to market.

The art of storytelling

Shekhar adds that recognising a change in customer behaviour early on can help you get an advantage over existing players.

On willingness to pay, Shekhar and Krish share their learnings on how most SaaS ideas these days are new tools for which people are not paying today. “Any new tool that crosses the boundary from using emails and spreadsheets for a task requires a nuanced conversation around hours saved or the benefit seen by the customer because in the older way there is no money being spent,” Shekhar says.

Having the willingness-to-pay conversation early on, identifying key features that warrant the customer to pay, and recognising the stakeholder who’s going to pay for the product become important.

Shekhar ends with the closing thought: “The art of storytelling is an important attribute for a successful founder. All large companies have a successful, high-quality team, and the ability to narrate your story and the potential impact on the world that your company would create gives a significant advantage to attract the right talent.”