Meet the Mavericks: Three founders who are repackaging ticket booking, trucking and apparels for modern-day consumers 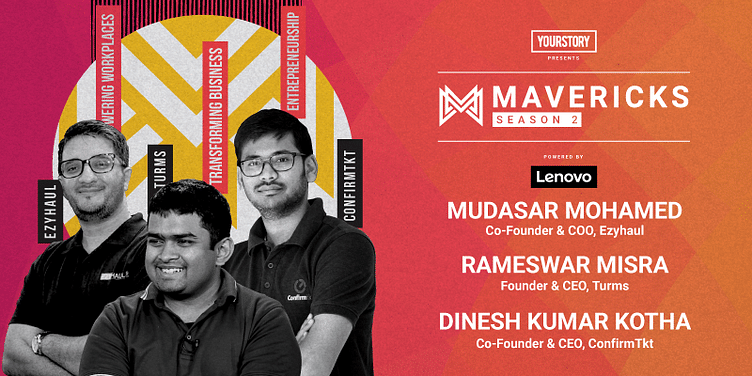 No guts, no glory: In the fourth episode of Season 2 of Mavericks, we talk to Rameswar Misra, Founder & CEO of Turms, Mudasar Mohamed, Co-Founder & COO of Ezyhaul and Dinesh Kumar Kotha, Co-Founder & CEO, ConfirmTkt on the journey from bootstrapping their ventures to capturing the market

In 2016, former colleagues Mudasar Mohamed, Raymond Gillon, and Nicky Lum co-founded Ezyhaul as an on-demand road freight exchange platform in Singapore to solve the supply-and-demand problem of logistics for large businesses by connecting shippers with reliable domestic carriers on their platform.

“We can cater to one truck or 50 trucks, while also having a full fledged team at the back end answering questions 24x7. We not only provide the trucks, but the real value from telling them (carriers) at the end of the month that ‘Hey, your trucks plied on these routes, there's a number of times it stopped, maybe you can try a different truck type, etc,’ said Co-founder Mudasar Mohamed.

“We've taken a very old product, which is trucking and kind of repackaged it and brought it into the 21st century,” he added. Ezyhaul is spread across five countries - India, Malaysia, Singapore, Thailand and Philippines.

Similarly, India’s first intelligent apparel brand, Turms, is another startup that is taking the traditional garment industry head-on with its innovation.

“The apparel industry has primarily been driven by design, fit, style and quality. We are adding a fifth element to it, which is technology,” says Rameswar Misra, Founder & CEO of Turms.

Launched in December 2016, Turms fuses nanotechnology with fibre technology to offer apparel with special properties like being stain repellent, odor resistant, cooling and wicking. This ensures that the regular cleaning cycle of your clothes is reduced and the wearer is comfortable all day. Moreover, there is a sustainability value-add to the products as well. “For cities like Chennai that are running out of water, Turms’ line of clothing can be re-used to save water too,” he said.

While Japanese brand Uniqlo has also dipped their toes in these waters, Rameswar said Turms is bringing technology into everyday apparel at an affordable price for all. Currently they retail the clothes on their website and are looking to tie up with e-commerce giants such as Myntra and Flipkart as well.

While for Rameswar, convincing customers to try ‘smart clothes’ was a difficult task given that it’s a brand new concept, it was easier for Ezyhaul to get truckers on board because of its no-fee structure and wide reach. However, with four million active monthly users and 25,000 confirmed train seat sales each month, finding a user-base came was no challenge for ConfirmTkt, a train ticket discovery and booking platform.

Founded in 2014 by Sripad Vaidya and Dinesh Kumar Kotha, the startup predicts confirmations of wait-listed train tickets on any given route by using a score of 0-100 by tracking PNRs and other data points.

“More than 40 percent of train tickets in India are waitlisted. That’s the massive problem that ConfirmTkt is solving. Once we launched the prediction feature, we had users flooding in,” said Dinesh.

ConfirmTkt is the official IRCTC partner train app for the Indian Railways. “For us, the challenge was not finding the user base but building a good business model, innovation and making profits is,” said Dinesh.

From bootstrapping to making a bounty

Ezyhaul began as a bootstrapped company. “It's very tough for somebody to give you money for an idea. So you need to have that conviction to use your own money to at least get the idea off the ground,” said Mudasar, adding,

“If you're a first time entrepreneur, you need to show them (Investors) something convincing. So I think bootstrapping with your own money is quite important. It also signals to the investor that you're serious about your business since you’ve put in your own money and that you are prepared to put in the grind.”

All three founders did not draw any salary in the first year of starting up. With the aim of launching in a smaller market to assess its product, Ezyhaul began operations in Malaysia first. They soon began getting offers and had a list of 10 good clients within months. Backed by the success, Ezyhaul raised a seed fund of $800,000 from Angel investors. From then on, there was no stopping them. After strategic investors pumped in another $25 million dollars, they began expansion into Thailand, followed by India.

For ConfirmTkt, their angel round funding came a year after founding the startup in July 2015. Multiple investors, including Pravin Agarwala had funded the startup, but they soon burnt the cash and found themselves with very little funds in reserve. There came a time when they couldn't afford to attend a Nasscom Investor meetup in Bangalore because of the high entry fee. While they managed to gain access with the help of some friends, that is where the founders met Apoorv Sharma and Anuj Golecha of Venture Catalysts. In January 2016, Confirmtkt raised $250K in seed round from the startup incubator.

For Turms, the bigger challenge was getting investors on board because they were trying to create an entire new category of business . The company began by bootstrapping with seed funds given by Rameswar’s former colleague and a friend before the launch of its line of smart jeans. “But it was a very small check and being an inventory-driven business, you lose out on money in the initial days of R&D. That followed a lot of knocking on the doors of Angel investors and groups, until finally Girish Mathrubootham of Freshworks decided to invest in Turms. This was followed by a round of angel funding to the tune of Rs 6 crore from angel investors including former Flipkart executive Mekin Maheswari and Sanjay Ramakrishnan, among others.

Every month, Turms sends out the company's financials and progress to the investors. “This sort of creates a transparency between us, although it's a very tedious task, but this ensures that people who have trusted us know what we are doing,” said Rameswar.

“It was our investors who guided us all the way through as we didn't have a business background. We are now a profitable company in a scaling phase,” said Dinesh.

Lessons from the entrepreneurs diary

While Rameswar also credits Turms’ success to the leap of faith by investors, his strong conviction of investing in R&D has also helped the startup immensely.

“It helps us stay in touch with the latest technology, which is at the core of our business,” said Rameswar, which he added was the biggest learning from his journey.

As for Ezyhaul, when they launched in India in 2018, they knew they were entering one of the biggest markets ever with a size of about $180 billion, and they took it head-on. “We turned profitable here (in India) and are close to turning profitable in Malaysia as well. We also launched into the Philippines three weeks ago,” said Mudasar. The biggest learnings that came from his journey was to keep the company lean. Ezyhaul has just about 120 employees across all five locations. The second lesson, he said, is to bring in a CTO in the early stages.

“Because all three of us had no coding background, it became difficult for us to convince investors. You also need strong teams in place to manage large volumes and above all, choose your co-founder well. Starting a company is like getting into a marriage, so make sure you enjoy working with them.”