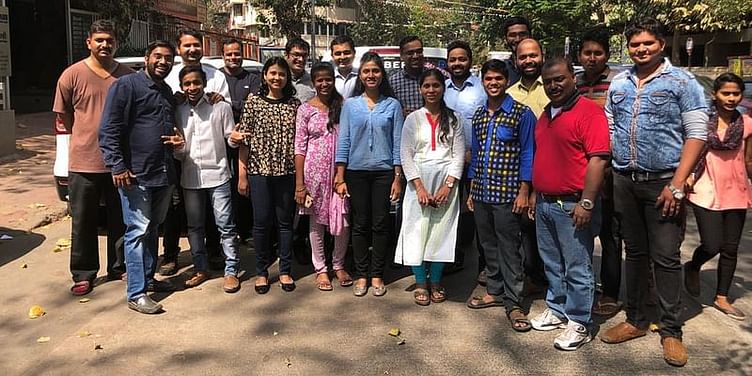 Across the world, life as we know it has come to a grinding halt. People are staying home, away from crowds, and have abandoned shared spaces, including public transport.

Seeing low demand and due to the fear of spreading the virus, ride-hailing services such as ﻿Uber﻿ and ﻿Ola﻿ have also suspended operations. However, the need for public transport during this emergency has been felt by many people.

Rising to this occasion is ﻿Everest Fleet﻿, which has started a B2C tech portal to offer safe commute to the frontline workers such as essential service providers, medical staff, as well as patients.

The Mumbai-based startup was founded in 2016 by angel investor Siddharth Ladsariya to focus on utilising assets efficiently, managing drivers, and the overall car maintenance. It also partnered with Uber to provide cars to the ride-hailing giant in Mumbai and Bengaluru.

Siddharth is an alumnus of Simon School of Business, University of Rochester. In 2016, while having a conversation with his driver’s brother, he came to know the latter worked as an Uber driver, and discussed how most cars go underutilised. It was then that Siddharth started thinking about ideas that would allow these assets (cars) to be utilised to their full potential.

Around August 2016, he started working on building a B2B fleet management company, and founded Everest Fleet in October 2016. Siddharth started the company with an initial investment of Rs 94 lakh from his savings, and two cars. Today, the startup boasts of 800 cars, all running on CNG.

The startup claims to be successful in addressing the challenge of scaling operations, which is usually faced by cab aggregators. Its business revolves around sweating the asset to the maximum potential as all its cars run for two shifts of 12 hours each.

“Currently, the asset (used by cab aggregators) is less than 40 percent, since it is run by a single driver. Everest Fleet tries to take it up to 80 percent by running the car round the clock, along with proprietary tech support,” says 35-year-old Siddharth.

The team and growth

According to the founder, the startup experienced the maximum growth after September 2019, when it recorded a 3x growth in six months.

“Our goal is to eventually move to an electric dominated fleet once the infrastructure and economics start kicking in,” Siddharth adds.

In the last four months, Everest Fleet has tripled its team size, currently having a team of 80 people managing the operations.

Siddharth is also an angel investor, and has previously invested in more than 110 startups, including ﻿Oyo﻿ Rooms, Myntra, ﻿FarEye﻿, Ridlr, and Greendust. His wife, Himani Ladsariya, takes care of the tech for Everest Fleet.

The startup provides employment to over 1,500 drivers. It was clocking over 1,75,000 plus rides a week before the nationwide coronavirus lockdown, generating Rs 8 crore in monthly revenue.

“We have been profitable since day one, and our aim is to clock over two lakh monthly rides with the same fleet once we begin normal operations,” he says.

All of Everest Fleet’s cars run for two shifts of 12-hours each. “There are 2.5 drivers per car to ensure adequate backups in case of leaves and absenteeism,” says Siddharth. He says that their in-house backend tech support makes the process seamless.

The pricing is usually determined by Uber, while Everest Fleet focuses on the operational management of its taxis and drivers. While Uber takes 20 percent of the fare as commission for every ride, Everest Fleet gets the remaining share.

“Our biggest challenge in the initial years was sourcing the drivers and running the double-shift model. However, our dedicated HR team has made it possible to scale the team seamlessly, where over 30 candidates walk in for jobs every day. We currently employ and provide accommodation to over 100 drivers from across the country,” Siddharth says.

Since the beginning of the lockdown, Everest Fleet has been providing its services to the frontline workers.

“In order to ease commuting, we request passengers to provide documents to prove that their travel is essential, as specified under the government’s guidelines. And only two passengers are allowed per car,” Siddharth says.

The pilot was started through a WhatsApp broadcast by a handful of people, and within the first few days, Everest Fleet received around 1,200 requests. Due to the massive demand, the startup has now requested travellers to make their bookings at least 12 hours prior to the ride.

For individuals with yellow ration cards (below poverty line), the startup has offered its services for free. For individuals working in the public sector, it is charging Rs 350 for each ride, irrespective of the distance covered. For private sector employees, the rate is Rs 500.

According to Siddharth, Everest Fleet has completed 10,000 plus rides in the last 30 days, of which 90 percent has been within Mumbai. Currently, Everest Fleet is reaching out to banks, hospitals, and government institutions to provide commuting assistance to its staff.

These services are currently being offered in Mumbai, Thane, and Navi Mumbai.

According to data provided by TechSciResearch, the Indian taxi market stood at around $6.4 million in 2016, and was expected to grow at a CAGR of 13.7 percent between 2017 and 2022 to reach $14.3 billion. This rise is attributed to changing lifestyles of travellers and increasing disposable income of consumers, especially in Tier I and II cities of the country.

Startups like ﻿Routematic﻿, ﻿MoveInSync﻿, Unisys, and Cubito have developed similar models, but there are not many startups in the fleet management sector.

“Everest Fleet’s model is unique and it focuses on building a full-stack approach to fleet management. Our focus is on building systems and technology that deliver higher operational efficiency,” Siddharth says.

Going ahead, the startup plans to increase its fleet size to more than 1,000 cars, and is targeting to close the year with Rs 100 crore revenue, despite the coronavirus disruption.