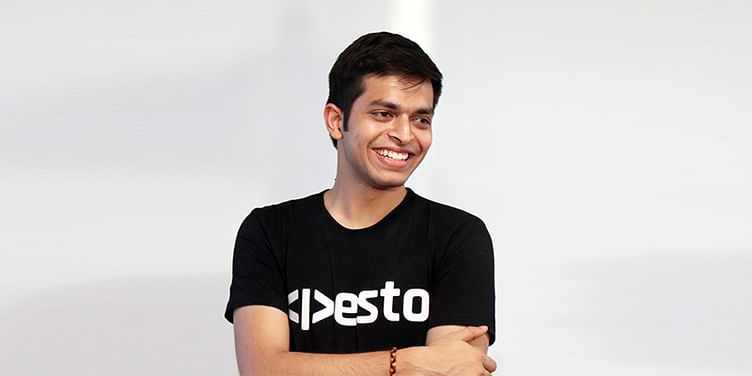 Ayush Jaiswal (24) grew up in the Holy City of Varanasi, a small-town situated on the banks of the river Ganga in Uttar Pradesh, flying kites and playing games on his computer. He aspired to be a chess grandmaster and even represented his school in national competitions.

But the launch of the first iPhone by Apple in 2007 altered his life’s plans. He got bitten by the entrepreneurial bug at the tender age of 12, seeing Steve Jobs unveil the iconic device. Intensive reading and research on the tech mogul followed.

“Everything was right there in your pocket! It was fascinating to think about the possibilities using that device,” he recalls.

“After eighth grade, I started skipping classes and worked on making websites and designing graphics. When I went to study engineering in Delhi, I wanted to be an entrepreneur. I started my first startup during my initial college days by making ERP (Enterprise Resource Planning) software for colleges,” says Ayush.

Coming from a business family, where almost no one ever has held a job, entrepreneurship perhaps runs in Ayush’s blood. But had he continued the Jaiswal legacy of inheriting the family business, he would have ended up running a furniture shop. Ayush had bigger dreams.

Like his hero Apple co-founder Steve Jobs, Ayush too ended up dropping out of college. “One day, my teacher told me that I’ve to have minimum 75 percent attendance and at the same time he said, ‘Your career won’t be made from 9 am to 5 pm classroom learning. You should learn after college, by yourself, using different online platforms’. After that, I didn’t see any logic in going to college and decided to leave,” he says.

His “middle-class” parents were “strictly against” the idea of him dropping out, so Ayush decided not to tell them, but quit college anyway.

“The amount of advice they got from relatives during this phase was absurd. So, I decided to not tell them because it was one less problem to have.”

Ayush stopped attending college six months into his engineering course, and officially dropped out about a year later. But for the next couple of years, his parents had no idea that he had quit college.

“This gave me a couple of years to do what I wanted without any family interruptions. I ended up spending the next two years bankrupt, living out of the coworking space Innov8, tried so many ideas, and worked for a bunch of startups for free,” says Ayush.

Failed and failed again, until he succeeded

Pesto Tech functions as a career accelerator and runs a 12-week bootcamp, where it trains software engineers (with minimum two years of experience) in soft-skills by connecting them to mentors in the US, who have worked with companies such as Facebook, Twitter, and Uber.

The training fee is free upfront and the mentors do not charge anything either. However, before joining the programme, students have to sign an income share agreement. Once the trained software engineers earn 1.5X of their previous salaries (or minimum 2X for low salary ranges) at a full-time remote job in an international tech company, they have to pay 17 percent of their annual income as training fee for the next three years on a monthly basis.

If the students are not making 1.5 times their previous salaries, the training is free. It charges a management cost of around $500 (nearly Rs 40,000) from its hiring partners.

The average salary of a Pesto graduate is around $46,000 (nearly Rs 35 lakh) according to the startup. “Pesto graduates make 5X more money than they were making before on an average. Some people even make 8-10X. The top alumni from the cohort have received offers of Rs 72 lakh, Rs 60 lakh, and Rs 45 lakh.”

A couple of months back, Andrew decided to move on from Pesto to build something of his own. “He will always remain an integral part of the Pesto community; we can’t wait to witness his journey ahead and wish him immense success,” says Ayush.

In an interesting turn of events, earlier this month, Swiggy Co-founder and CTO Rahul Jaimini left the foodtech unicorn (valued at over $3 billion) — which he had co-founded with Sriharsha and Nandan in 2014 — to join Pesto.

The 32-year-old IIT Kharagpur graduate, who had earlier worked with Myntra, was responsible for building Swiggy’s technology backbone while overseeing its evolution into the complex system to deliver personalised experiences at scale.

At Pesto, Rahul is still transitioning into his new role and will be joining the young startup as a co-founder and COO (Chief Operating Officer).

“Rahul has been an early supporter of Pesto. I met the Swiggy founding team in early 2019 and it took not more than 30 minutes for us to connect. Rahul had always been our cheerleader since then. He had been advising us since last year and was quite passionate about the problem we were trying to solve,” says Ayush.

Pesto’s problem statement is to take opportunities to places where talent exists. “Talent is universal, but opportunity is not.”

Commenting on Rahul’s association with the startup, Ayush says, “He was first an investor, then a mentor, then a brother, and now my co-founder. I think you have to be blessed to get that lucky. His belief in our mission and potential has been a huge driving force behind what we have accomplished so far.”

Rahul will also be investing more funds in the startup.

Ayush believes that Rahul’s experience in seeing scale at Swiggy will be critical for Pesto to enter the next phase of growth, and says, “He obviously brings on board a very strong business acumen, having been part of building a unicorn in his previous role, a keen sense of agility, and organisational productivity that we at Pesto are eager to be inspired by.”

At present, the startup has a lean team of 12, but plans to double it over the “coming quarters”.  It is hiring for several positions across sales, partnership, strategy, product, and finance.

Amidst industry-wide job and salary cuts owing to the coronavirus pandemic, edtech is one of the few sectors still thriving and hiring as social distancing becomes the norm in a new world.

“Currently, over two billion people in the world are under some sort of lockdown because of the ongoing pandemic. Global workforces have been forced to adapt to the new reality of remote work overnight,” says Ayush.

He believes the edtech industry is likely to achieve its targets for the next 10 years in the next couple of years itself. Last year, education market intelligence firm HolonIQ estimated that the global edtech market was poised to reach $341 billion by 2025. But, given the current tectonic shift to remote learning and working, this milestone is likely to be achieved much sooner.

Edtech majors such as Byju’s, Vedantu, Toppr, and Unacademy have all seen a significant spike in both users and revenue, amid the pandemic. For instance, Unacademy has seen an 82 percent month-on-month rise in its April revenue, as well as 10 times more registrations compared to the same period last year.

Vedantu, on the other hand, has seen its collections and revenue surge 80 percent month-on-month, during the same period, achieving its highest growth over the collective last two and a half years.

Pesto, which competes with the upskilling platforms such as TalentSprint, is however, reticent about sharing numbers.

Ayush believes since people are now more open to behavioural changes than ever before, Pesto has “a massive opportunity and responsibility” to shape the new way of doing things.

“We at Pesto have been enabling a remote workforce since its inception. As a champion of remote work and remote learning, Pesto takes it as a responsibility to help the world, and specifically India, to be prepared and skilled for the future of work, which is essentially remote,” he adds.”

Ayush says, “Our prediction in January was that by the end of 2020 many engineers would go remote. Now, in a post-pandemic reality, people have realised that remote work is not just possible, it’s more productive.”

He is of the opinion that top talent will dictate terms in a post-COVID-19-world, which will force all companies to go remote to attract or retain talent.

In January, Pesto launched an online version of its upskilling programme for engineers. Ayush says,  “Through this programme, we are providing next-level learning, development, and skills solutions to candidates across the country from the convenience of their homes. This was another step towards our mission of enabling global parity and borderless opportunities for Indian engineers. Given the new reality, our launch happened well in time for Indian engineers to take advantage of it remotely.”