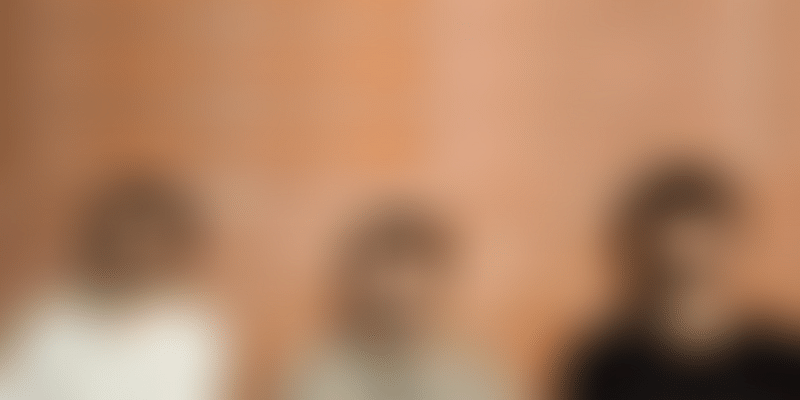 Kolkata boys Rajit Bhattacharya (23) and Ankit Das (22) met as toddlers at nursery school. The two friends grew up together, attending the city’s well-known South Point School. They also landed up at the same engineering college, Jadavpur University. There they met Aisik Paul (23), who was pursuing electronics and telecommunications engineering with Rajit, while Ankit studied chemical engineering.

The three friends often worked together for various college events and festivals. The trio was adamant about “starting something of their own” and not taking up jobs after graduating from engineering college. That’s why they chose not to appear for a single interview during college placements.

In 2018, their final year of college, the batch mates set up data startup Data Sutram, after having skipped placements and amid stiff resistance from their families.

“Jadavpur University, ranked among the top engineering colleges in India, is known for its placement record and job offers. Coming from service backgrounds, we had immense resistance from our families for not sitting for placements,” say Aisik and Ankit.

The resistance from Rajit’s folks was relatively less as his parents had an entrepreneurial background. The senior Bhattacharya, an IIT-graduate, was an engineer in a US firm, before he set up a social enterprise two decades back with Rajit’s mother, also a Jadavpur University engineering graduate.

Besides the placements, there was also pressure from the families on the three young men to pursue MBA. The group jokes that till date Ankit's father sends him MBA preparation material.

“I think one of the fundamental reasons we didn't pursue MBA is summarised by simple data that suggests that the conversion of MBA graduates into entrepreneurs right after MBA is very low, not just in India but internationally.

“I feel what drew us to entrepreneurship was our technology's ability to make a difference to solve problems. I feel we had really good mentors who helped us bridge the business gap, to never really feel like we needed it, (an MBA)” Rajit says.

The startup was inspired by two major events that led the trio to discover “the power of unstructured data”.

The first was an internship project in their third year, where they developed a platform that used satellite data to predict crop yield and help the government plan fertiliser distribution and subsidies across the state to encourage farmers to grow and meet demand.

The second was when they developed a predictive analytics solution for a retail chain as part of a project that measured demographic and ethnic distributions around a store to estimate the potential sales of each grocery item.

What does Data Sutram do?

The Kolkata startup helps businesses increase delivery efficiency and reduce marketing burn. “With our data and insight, companies have increased deliveries by over 35 percent, increased growth of push channel by up to 20 percent, and reduced marketing burn by 60 percent,” Rajit says.

With a global shift in focus from globalisation to localisation and the boom of ecommerce, the need of the hour is hyper-local data and actionable insights, he explains.

This is done by pinpointing new locations for business to expand, improving performance of existing assets (both physical and digital), and microtargeting the right audience for the product.

According to market research and consulting firm Mordor Intelligence, the data as a service (DaaS) market was valued at $26.23 billion in 2019 and is expected to reach $46.50 billion by 2025, at a compound annual growth rate of 10 percent over the forecast period of 2020-2025.

Data Sutaram expects to break even in three years and hit the Rs 1 crore revenue mark within a year.

What’s under the hood?

The Data Sutram platform comprises two parts: a data engine and a visualisation platform. The first part is an AI engine that automatically processes raw data from multiple sources, cleans, geotags, structures, and marries it to create socio-economic demographic indexes about every location at various granularity levels.

“The data engines tap into over 178 data sources of both public and private, including satellites,” Rajit says.

The visualisation platform is a Geographic Information System (GIS) platform that integrates data visualisation and data analytics to help clients visualise the impact of their decisions on the locations and give them insight to help them leverage the power of location data.

“The unstructured data lying in the form of text and images within multiple sources is like raw cotton that needs to be processed, cleaned, geotagged and converted into textile that can be readily utilised by a business,” Rajit explains.

As far as competition in India is concerned, it includes the likes of Bengaluru-based location intelligence startups Locale.ai and GeoIq.

However, Data Sutram believes its “ability to make use of unstructured data (in the form of images, text in different languages not readily consumable for a business) through its AI engine” sets it apart.

The startup was initially bootstrapped and surviving on revenue from consultancy projects, with six engineers on board. Three months after graduating from engineering college, the trio received a call from serial entrepreneur-turned-angel investor Sanjay Mehta to come pitch in Mumbai to be part of the first cohort of 100X.VC, a venture capital firm set up by him.

The team managed to raise its first cheque within two days of its maiden investment pitch.

“Two weeks of the 100X.VC programme gave exposure to a huge industry circuit and funding circle opened up a lot of opportunities for us fresh-out-of-college engineers and proved to be a life-changing event,” Rajit says.

Data Sutaram raised Rs 25 lakh from 100X.VC. It is currently in talks with angel networks to raise around Rs 2 crore within the next two-three months.

Currently the startup has a 11-member team, including the three co-founders.

Data Sutram’s focus sectors are retail, ecommerce, agri tech and BFSI (Banking, Financial Services and Insurance). Amid the coronavirus pandemic, the retail sector has taken a big hit and the startup’s clients have been unable to pay for the services.

“However, with a quick turnaround time, our focus has shifted towards essential services like groceries and pharmacies,” Rajit says.

Just as location intelligence methodologies such as geofencing and geo-targeting are being utilised by the government to tackle the spread of the coronavirus, the same can be done to solve the bottlenecks that have come up in supply-chain logistics, he adds.

“Our platform along with the population density, store coordinates, and other external data points can predict the demand of essential commodities for every locality. The platform can track the demand real time and prevent an area from having a shortage crisis by alerting distributors, pharma and grocery chains, and authorities about an impending crisis.”

Citizens can also alert and convey their need for essential goods that they are unable to find in their neighbourhood by directly accessing the platform and submitting their query.

“Our platform has helped one of the most reputed pharma brands of western India to deliver medicines to a larger number of housing societies in Mumbai, Pune and Thane, helping it utilise its resources more efficiently,” Rajit says.