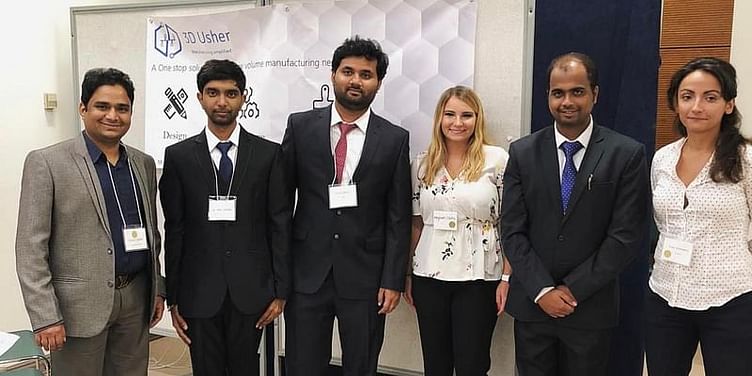 Since the beginning of the coronavirus pandemic and the global lockdown that followed, manufacturing requirements from the consumer sector has dropped. Product-based companies have either pushed their timelines, or have temporarily halted the production of new batches.

But with healthcare taking the centre stage in the battle against the coronavirus, demand for items such hospital equipment, safety kits, and protective gear has surged. While governments around the world are pitching in to meet some of these demands, there has been a supply shortage.

Private companies, from fashion retailers and shoe makers, to skincare companies and alcohol distilleries are all coming up with ways to meet some of the demand by reorienting their processes to manufacture health and hygiene products. Skincare and liquor companies, for example, are producing hand santisers, while fashion companies are sewing face masks and protective gowns.

On-demand design and manufacturing startup 3D Usher is making the most of this situation too – with the help of its manufacturing partners, 3D Usher has been producing healthcare and safety products, and supplying PPE kits to hospital staff, security personnel and municipality waste collectors.

The Syracuse, New York-headquartered Indo-US startup says it wants to aid the healthcare community in ‘flattening the curve’.

“We have raised donations to provide 3,000 pieces of PPE equipment and are intending to scale up to one lakh units,” says Gopal Krishna, Co-founder of 3D Usher.

Founded in 2018, 3D Usher is an on-demand SaaS company (Software as a Service). The company’s India office is located in Hyderabad.

Faizan, 27, was Gopal’s classmate at MIT. He left ﻿BYJU'S﻿, where he was working as an assistant manager, and joined Global 3D Labs as its COO. The duo have been working on projects together since college. They decided to get into on-demand production after they struggled to manufacture a 3D printer for Global 3D Labs.

“It is then that we faced difficulties in manufacturing first-hand and realised that a solution like 3D Usher would change the way manufacturing works,” Gopal adds.

They met 30-year-old Theodora through investors StarFast Venture Accelerator. A graduate from Binghamton University in the US, she is also the Co-founder and Business Development Head at Trade Show Stars. “With her experience in sales, and the understanding of the US market, we thought that she would be the ideal Co-Founder to have in the US,” Gopal says.

Poornachandra, 35, a former Deloitte employee, joined the core team in the US, when the existing members were looking for mentors and Co-Founders at an event in Houston, Texas.

3D Usher employs a total of 15 people at both its offices.

3D Usher works as a manufacturing and on-demand startup. It has a list of hardware startups that provides it design and manufacturing solutions.

Customers can avail its design and manufacturing services separately, and also as a combined package. The 3D model file is designed as per the customer’s instructions and preferences. For manufacturing only, they are required to upload relevant documents that detail the product on 3D Usher’s platform, modify it, and place the order, all on one, integrated platform.

In the backend, 3D Usher automatically identifies the right manufacturer for the product requested, and gets the order executed and delivered to the customer, seamlessly. Its services include injection molding, CNC machining, and vacuum casting.

“We got our first 100 customers within the six months of starting sales,” Gopal says.  The startup charges a 20 percent commission from vendors on all products manufactured by them.

“We are also developing a SaaS product for the customers where they can take monthly subscriptions for our product. Pricing and features will be announced shortly,” he adds.

Gopal says that the recent trade spats between western countries and China have taught the team a lesson or two.

“A lot of hardware-based companies depend on China for getting their parts manufactured. This trade war certainly affected these teams and it was a challenging situation for their sourcing teams. Our New York and Hyderabad offices took this opportunity and we helped a lot of companies in supplying their requirements by manufacturing them both in India and in the US.”

According to Gopal, India particularly stands out when it comes to plastic-based manufacturing. The startup exports products to multiple countries across Europe, the US, and Canada, from India.

The growth will be stem from an increasing demand for connected supply chains and knowledge-based manufacturing processes. Increasing availability of 3D printing and plant asset management solutions will also contribute to the growth of businesses as they digitise the report further suggested. 3D Usher competes with the likes of 3D Hubs, ﻿Xometry﻿, and Proto Labs.

“We are different because we are developing a SaaS model around manufacturing on demand which has never been done before,” says Gopal.

It claims to have more than 200 customers, and about five lakh parts under production. According to the founders, the company has running contracts worth $2 million plus.

The initial investment of $35,000 was provided to 3D Usher by StartFast and IIM Ahmedabad’s startup incubator CIIE. Since then, the startup has raised $400,000 from StartFast, Launch New York and Tech Garden.

“We also did a family and friends round in Houston through Poorna’s connections,” he adds.

3D Usher is looking to raise its Series A round later this year, and intends to start Mexico and China operations, soon.

The startup is still accepting donations for the manufacturing of PPE kits at http://bit.ly/k3du.