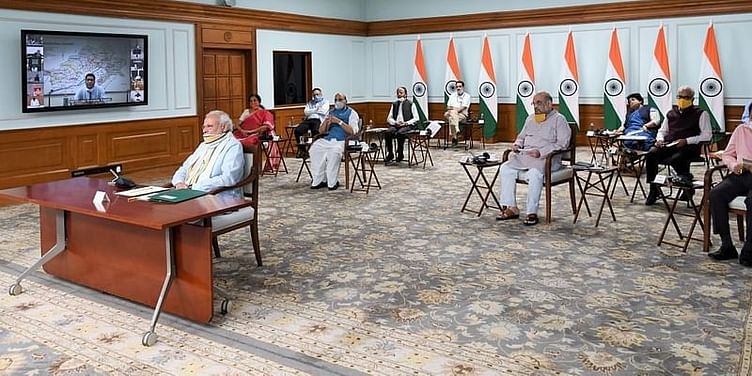 India Inc on Tuesday said PM Modi's Rs 20 lakh crore stimulus package was the "need of the hour" as it will pave the way for post-pandemic recovery and unleash the next wave of economic growth.

India Inc on Tuesday said Prime Minister Narendra Modi's announcement of a Rs 20 lakh crore stimulus package was the "need of the hour" as it will pave the way for post pandemic recovery and unleash the next wave of economic growth.

In his speech, Modi announced that the total stimulus India is marshalling together to limit the impact of the COVID-19 crisis on the economy will be a little less than 10 percent of the GDP, and Finance Minister Nirmala Sitharaman will be announcing the exact details soon.

Industry bodies said the Make In India flagship will emerge as a key catalyst for attracting new investment, driven by much needed bold reforms in the areas of land, labour and liquidity.

"We appreciate that the Prime Minister spoke about the areas of land, labour, liquidity and simplification of laws which are the key challenges of the economy. Reforms in these four areas will truly unleash the next wave of economic growth within this crisis situation," CII Director General Chandrajit Banerjee said.

"We expect that the contours of the package to be announced by Finance Minister Nirmala Sitharaman will address the needs of the poor and needy, MSMEs and also the industry and common man on the whole. The stress on land, labour and liquidity is what is required to make India self-reliant," she added.

The main focus of the Prime Minister's 33-minute speech, which acknowledged that the coronavirus scare is here to stay for long, was self reliance.

Assocham Secretary General Deepak Sood said, "The five-pillars of building a self-reliant India would take us towards becoming a credible global force that reaches out to the world from a position of strength but with a sense of responsibility and humility."

He said along with the economic package, the bold reforms across all the sectors - agriculture, taxation, infrastructure, human resource and the financial system - would go a long way to attract investment and revive demand in the economy.

The Make In India flagship would be a key catalyst for new investment, be it local or global, Sood added.

The Society of Indian Automobile Manufacturers (SIAM) also hoped that a focussed package to support the Indian Automotive Industry would be announced by the Finance Minister, when she announces the details of the package.

Nisha Biswal, President, US-India Business Council, said, "At Rs 20 lakh crore, the overall response will go a long way toward stabilising the Indian economy and positioning it for post-pandemic recovery. It will also support industry's efforts to put tens of millions of Indians back to work safely and minimize the spread of the novel coronavirus."

PHD Chamber of Commerce and Industry President D K Aggarwal said the stimulus package, at this juncture, is need of the hour to refuel economic fundamentals of the economy and resume the economic activity.

"We cannot be hostage to the virus and need to get on with our lives. We have to start buying local and be vocal about it," Goenka, a part of the conglomerate with a global footprint, said in a tweet.

Harsh Goenka of RPG Enterprises called it a powerful booster to the economy and a timely lifeline which will benefit all sections of the people and lift a lot of struggling sections out of trouble.

Adar Poonawala, who leads Serum Institute of India, the world's largest vaccine maker, said $200 billion stimulus is the right commitment and hoped for proper utilisation of the money to help the needy.

"I hope this money actually ends up in the hands of the people who need it the most, and does not get lost in complicated schemes," he tweeted.

Gautam Singhania of textiles and garment maker Raymond said the country is "migrating from merely battling a pandemic to bringing a paradigm shift in the economic affairs" to become self-reliant and welcomed the vision outlined to make local products global.

Japanese electronics major Panasonic's head for the country, Manish Sharma, said it is a "fairly large package" and appreciated the intent to expand domestic manufacturing and becoming a part of the global supply chains "considering the geopolitical environment".

Greaves Cotton's Nagesh Basavanhalli said the quantum of the package was a surprise and hoped that it will help the manufacturing sector.

"The industry is now looking forward to the finer details of this enormous package," he said.

In a big push to revive the economy, Modi has announced a Rs 20 lakh crore package, which combined the government's recent announcements on supporting key sectors as also measures rolled out by the Reserve Bank of India.

In a televised address to the nation, the prime minister said the details about fourth phase of the lockdown will be made known before May 18, adding it will be different from the earlier phases.

The third phase of the lockdown ends on May 17.