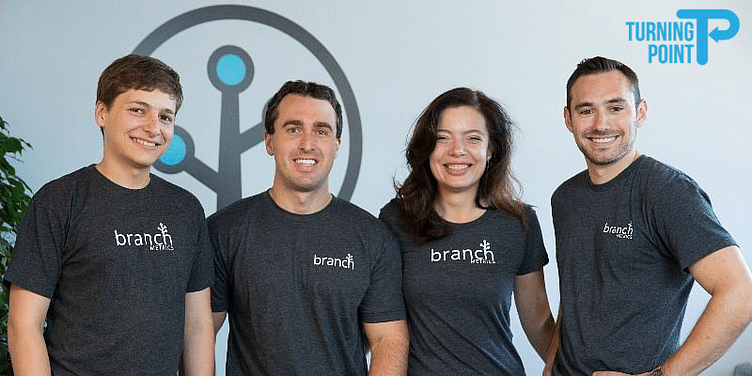 The Turning Point is a series of short articles that focusses on the moment when an entrepreneur hit upon their winning idea. Today, we look at Palo Alto-based Branch Metrics, a deep linking platform that helps companies and app developers acquire and retain users.

The founders of Branch Metrics were first dabbling with a photo book printing mobile app called Kindred. Having worked on it for over a year, the biggest challenges they stumbled upon was growth and discovery of the app.

With $18 million in funding, California-based Branch Metrics sets up base in India

The co-founders - Alex Austin, Mada Saghete, Mike Molinet, and Dmitri Gaskin, were struggling to grow the user base of Kindred. The app was featured in the best new apps on the App Store and Google Play, and managed to raise some funds for user acquisition. But when the feature ended, they understood that maintaining the growth was a hassle.

Mada tells YourStory, “App installs were super expensive and organic tactics like sharing of content and referral that worked on the web didn’t work on mobile. On a Sunday, we got together and thought about our biggest challenges and how to solve them — and the idea of deferred deep linking came up.”

After talking to their friends at companies like Zynga and Trip.com, Alex and Mada learnt that everyone faced similar problem. For example, the content sharing mechanisms that had made Zynga so successful on Facebook didn’t work on mobile.

They thought, why solve this for just themselves when they could solve it for everyone, and that’s how the journey of Branch Metrics started.

On the web, it is easy to have links that take users to the content and understand where the users come from. But the problem arises when mobile phones are introduced. Mobile apps are more siloed and there is no standard on how to link to an app in the same way you link to a website.

The appropriate solution to the problem statement started with building a routing and matching system that ensures a user clicking on a link is matched to a user opening an app.

“Think of us like the piping of mobile that connects everything together. We make sure that all those users get to the right destination, and we tell the app owner how their users got there,” Mada says.

The startup has so far raised $129 million in Series D equity funding, and $60 million in Series C funding. For its Series B round, Branch Metrics raised $35 million, which was led by Founders Fund, with participation from all existing investors, including New Enterprise Associates (NEA), Pejman Mar Ventures, Cowboy Ventures, Zach Coelius, and Ben Narasin, and new investor Madrona Venture Group.