Pivot and Persist: Backed by multiple celebrities, this yoga startup is going digital to stay fit during COVID-19 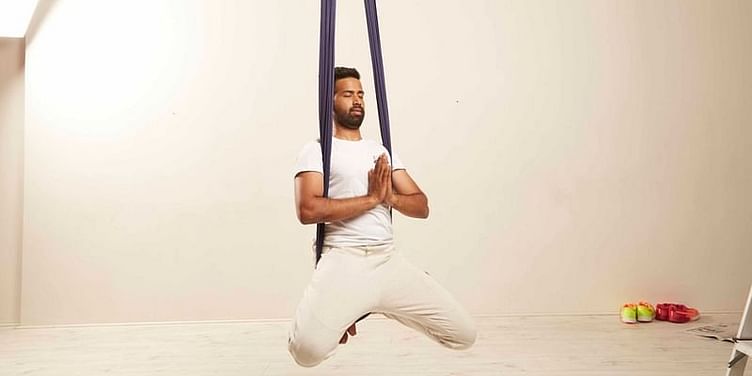 The coronavirus pandemic has posed a ‘do or die’ situation for many businesses. While physical fitness and increased immunity are critical in our fight against COVID-19, businesses operating in the wellness segment have also been affected due to the lockdown.

However, for Sarvesh Shashi, Founder, ﻿SARVA﻿and Diva Yoga, which is backed by celebrities like Jennifer Lopez, Malaika Arora, Shikhar Dhawan, etc., the pandemic has only fast-tracked goals for the startup.

Pinning hopes on a digital future, the startup built its online presence and launched an app in March this year, and is eyeing profitability by FY21.

Founded in March 2016 as ﻿SARVA﻿Yoga Studio, it is now well known as SARVA & Diva Yoga after the startup launched its premium brand segment Diva Yoga, co-founded by Malaika Arora.

The wellness startup, which offers curated workout routines by Malaika Arora, has over 40 studios across five cities. It has clocked revenue to the tune of $4 million for the financial year (FY) 2020.

“SARVA envisions to become the ﻿Netflix﻿of wellness by having content designed, defined, and delivered under the sections of Mind, Body, and Nourish. It aims to organise the currently fragmented yoga and wellness industry not just in India but internationally as well,” says 27-year-old Sarvesh.

While SARVA studios continue to remain shut due to the lockdown, Sarvesh says most of its consumers are engaged through live online programmes.

The SARVA app offers live and interactive virtual classes, and a mechanism that gives users real-time feedback on their posture. The app hosts a range of content for both body and mind like live yoga sessions, postures, weight loss programmes, sleep stories, guided meditation, mindfulness music, stories for children, etc.

Commenting on resuming its brick-and-mortar business, Sarvesh says, “Time will tell. We are looking at things with many lenses. For instance, the landlord’s support is key, and so is profitability, bandwidth, time, and so on,” he says.

“We believe the brick and mortar business will take a significant amount of time to recuperate and come back. The focus is completely on digital now,” he adds.

Sarvesh points out that SARVA is going to be a very lean team as a digital company, and has less than 50 people at present.

While the company was already restructuring to launch its digital offering, it had plans to trim the team by reducing 25 percent of its workforce. But due to the COVID-19 impact, SARVA had to let go of 10-12 percent more people.

“People generally believe that digital businesses burn a lot of cash. You do not need a lot of cash. You can build a sustainable, good, profitable business if the basic components of your business are right. The four key metrics are acquisition, engagement, retention, and a good user persona. A good user sticks with you,” he says.

Speaking more about what the startup is offering on the digital platform, Sarvesh says, the digital offering is going to be about four sections - Body, Mind, Nourish, and Achieve.

While the mind and body sections are live on the app, the nourish section will have recipes, and the achieve section will focus on transformation, and it will be live in the next phase of the app development this year. The app is currently offering content in six regional languages including Hindi, Tamil, Marathi, etc., and is going to add more languages this month.

“We were planning to launch our digital offering. But due to various reasons, it was getting pushed. We had planned the launch on June 21, but then we fast-tracked it and launched the entire digital offering on March 21,” says Sarvesh.

In terms of competition in the digital wellness space, Sarvesh says, there are a lot of fitness players in India, but there are no big players in the yoga segment.

“Since ‘Vocal for Local’ is also becoming a big trend, one of the few things that we can genuinely become vocal for local is yoga,” he says.

The yogi-turned-entrepreneur says that since SARVA is from India, the startup has a very strong authenticity element, which can be gauged by the fact that its app has already been accessed in about 100 countries like the US, the UK, Italy, Singapore, and others since its launch.

The business of Yoga

A shaman inspired this 17-year-old million-dollar heir to renounce everything, become a yogi, and startup a worldwide chain of 'happiness' studios

Since the launch of the app, Sarvesh says, the startup has seen a month-on-month growth of 350 percent, and has completed over 2.8 billion minutes of live classes till date.

“The traction in the number of paying users is increasing, and in the April-June period, SARVA’s revenue grew by 200 percent,” he says.

“Personally, I have been in a very good place. Tough times do come. The only thing that matters is how we can fly through such situations,” he says.

In his personal life too, Sarvesh transformed himself from an unsettled stranger to a millennial entrepreneur who wants to help others in their quest for a healthier lifestyle.

Sarvesh recalls that he was a teenager who lacked patience and understanding, and only had one demand: wanting things and getting them done in his way. Things changed when he met his guru, who led him on to the path of Yoga.

In an earlier conversation with ﻿YourStory Media﻿, he said: “My life can be categorised into two phases: the crude years before 17 and the inquisitive ones after.”

SARVA and Diva yoga has charted out its plan for the next 18 months. Sarvesh says the goal is all set till September 2021, and the top management at SARVA has a lot of plans in place. But the larger goal is profitability, he adds.

SARVA’s aim for the next 18 months is to make the digital business more profitable.

With the aim to drive a cultural change in the society, Sarvesh wants to make yoga-based wellness a part of the modern lifestyle to combat health problems like stress, anxiety, depression, sleeplessness, and obesity.

The company's business model is based on a freemium model, where users can access some free sessions and will have to pay for full courses or advanced sessions.