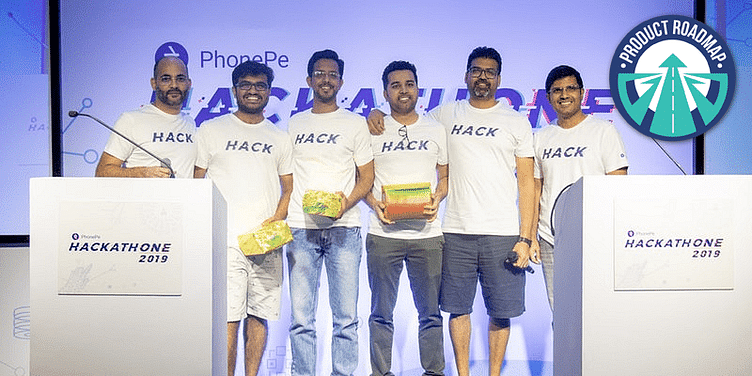 A product roadmap clarifies the why, what, and how behind what a tech startup is building. This week, we take a closer look at fintech startup PhonePe, which was launched in 2016 and now handles over 20 million transactions in a day.

When Sameer Nigam and Rahul Chari started PhonePe in 2015, they had four main constructs for helping consumers in their financial journey: Send, Spend, Manage, and Grow. Each of these stages has since then seen different steps of product evolution and growth, and impacted the startup’s journey.

The seeds of ﻿PhonePe﻿were sowed when Flyte, a music downloading platform launched by Sameer and Rahul in 2012, didn’t pan out as they had planned. One of the main reasons for its shutdown was that payments and micro-transactions were not solved for.

The duo, then at Flipkart, had seen payment systems and gateways fail during the 2014 Big Billion Days Sale. It made them realise that there was a need for a platform that made financial services and payments simple, and led them to conceptualise PhonePe. The fintech startup was founded at the end of 2015, and launched in 2016.

Today, PhonePe handles over 20 million transactions in a day, and claims to contribute 40 percent of over a billion UPI transactions that take place in a day. Acquired by Flipkart, it has also entered the domain of financial services.

However, PhonePe isn’t the only fintech startup making inroads. It directly competes with the likes of Paytm, which recently acquired insurance firm Raheja QBE for $74 million. Even amid the COVID-19 pandemic, Paytm Payments Bank facilitated about 500 crore digital transactions worth Rs 4.6 lakh crore in FY20 and witnessed an accelerated increase in deposits.

However, PhonePe believes it continues to hold its ground with a deep focus on tech and product integration that aligns with consumer needs.

Explaining how they focused on the product roadmap, Rahul Chari, Co-founder and CTO, PhonePe, says, “We engineered the product evolution and growth through four phases - Send, Spend, Manage, and Grow. Any platform dealing with money, financial services, and transactions needs to be established on the basis of trust.”

He says banks have been the custodians of people’s money for eons. “So there is this inherent trust. To get to manage people’s money, we first had to establish trust, and for that we had to make sending money simple and ubiquitous.”

Rahul says that while financial services, as a volume of usage, is lesser compared with the other financial products, the amount of money is larger and higher. That’s why it was important to first build for scale and trust.

Hemant Gala, VP Financial Services and Payments, PhonePe, says they had found that one of the biggest pain points was that people were unable to send money quickly – “in seconds”. Focusing on the “Send”, the team began by building a non-banking UPI payments system. The focus was to ensure that people could send money immediately and in a hassle-free manner.

“We focused on sending money with a mobile number, bank accounts, UPI handles, multiple bank accounts etc,” Hemant says. They started with a chat model where one could send money and get a confirmation immediately, ensuring “Spend” and ease of transaction.

Multiple use cases were then built on top of sending money.

Building a deeper ecosystem of merchants

People tend to incur discretionary and non-discretionary expenses such as outstanding loans, bills, gifting etc. It was important to partner not just with banks but also with online and offline merchants to make sending and spending easy.

“India was transitioning into a smartphone ecosystem, and data was growing. We realised people wanted to remit and send money, which led us to build Switch. This helped merchants come on to the PhonePe platform and co-host their businesses; it made transacting with merchants easy. Today, 200 million consumers use Switch,” Hemant says.

Online and offline merchants across multiple categories can come and integrate on the platform through any framework. The PhonePe team launched initially with two players and soon expanded to multiple users.

Today, the fintech startup has over 10 million merchants on its platform, including Ola, Swiggy, Grofers, and several kiranas. It has geotagged every merchant with categories like wellness, grocery, and essentials, so that when a consumer opens the app, they see businesses within 100 to 200 meters of their vicinity.

Ensuring the success of a transaction

The team focused on “ease of use”, building to ensure the success of a transaction.

Rahul says they concentrated on building a “kill switch”. Explaining its function, he says it works on a gradual level of the transaction and predicts its success based on the defined threshold. It then either allows or disallows a transaction.

Explaining further, he says: “Early on, we realised any peer-to-peer transaction or deemed transaction can have one core problem - the money gets debited from the sender’s account but isn’t credited to the receiver’s account. There can be several reasons for this - network, connectivity, infrastructural downtime. Over time, things have improved, but these problems persist. Keeping all this in mind, we built a predictive model that would stop transactions that were less likely to be completed, and also inform the consumer when they can complete a transaction.”

He explains this was extremely important for capability at scale, especially “with the 20 million transactions we do”.

PhonePe was also one of the few fintech players to launch a completely interoperable QR code. Any operator can scan this; it’s not just limited to PhonePe consumers. The idea was to give a QR code that solves pain points for merchants and use cases.

“The idea is to make the product simple, functional, and easy to use for the masses. We want to take all kinds of financial services across India, even in Tier II and III cities, in a manner that people aren’t overwhelmed,” Rahul says.

The tech team then built a platform “Yatra” to track a consumer’s transactional journey on an individual level. Each consumer is associated with a profile or cohort, and each cohort has a defined journey on the level of engagement, kind of spends on the platform, and the stage at which they become ideal for an introduction to financial services.

“We automatically engineer nudges on the platform. User familiarity and level of engagement boost the chances of engaging with financial services,” Rahul says.

He explains the idea is to introduce features and modules basis on user needs. There are no push notifications for all; interventions are based on individual needs. “We have a targeting engine Hawkeye, which tracks consumer preferences and any personalisation from our data models. The combination of Yatra and Hawkeye helps us introduce products at the right life stage of the consumer,” Rahul explains.

These features were built in the early days at scale, and have now become “day-one capabilities for any financial service that PhonePe introduces”.

“When you are introducing products as complicated as insurance or super funds, you need to educate customers and introduce them at the right time in the journey.”

Reducing the impact of a crisis

In March, Yes Bank was put under a moratorium by the RBI, which impacted PhonePe as it relied on the bank for its transactions. But as the platform was built earlier and had worked on several integrations, the turnaround the team had during the crisis was easier.

Rahul says this required integration with the PSP of the banking partner, and manifestation of the product on the consumer app.

“If you decouple these two, the preparedness on working with another bank on the backend and integration was simpler. We were able to give continuity to the consumer. The work was on the consumer manifestation side; COVID -19 had slowed it down or going live would’ve been faster,” Rahul says.

Hemant adds that the team began by creating a playbook where they listed all functions on finance, payments, banking, and operations. They started with sending out the right communication - on what was happening and what the team was working on.

“We worked closely with regulators and partners to work around the problems. We focused on core financial systems like settlement accounts and legal teams, and everything running in parallel. The on-ground team reached out to merchants so that they didn’t get impacted,” Hemant says.

Rahul says the coronavirus pandemic has led everyone to focus on business continuity.

“We have had one advantage compared to other companies - outside traditional teams of marketing, ops, and business, we also have a ‘pod' structure. If you have a charter that has longevity of a year or beyond, you want to invest in a roadmap. For that, we identify all the individuals needed to make the ‘pod’ successful. Each charter is a pod. So, if there is a ‘Mutual Funds’ pod, there are engineers, product managers, etc, who become a startup within the company. They are focused on taking mutual funds live and taking the journey through one year. Post this, the pod may split or may merge, but for the year, we have identified people. So everyone is in sync and works better.”

The fact that the team has been able to focus and identify what their core platforms are has worked for PhonePe.  Rahul says that many times the core platforms and business verticals merge in the lens of a technology perspective.

“Having the distinction and investing significantly more on core platforms is very important. If you start building with a two-year view on your product and invest in them, it helps from time perspective,” he says.

The founder advises that teams should never take shortcuts on the core platform; the growth hacking and shortcuts can be on the peripheral systems.

“This means you need to give your core platforms time; you cannot afford to be scrappy with your first launch. Continue to invest on these as horizontals while you build your business. This significantly reduces your tech debt,” Rahul says.